From Genesis to Chiswick Auctions: The Double Neck Guitar

Ahead of the Vintage and Rare Guitars auction on 4 October, we speak to Guitar and Folk Instruments Specialist Dr. David MacGregor about the history of the Double Neck guitar and the two rare Shergold Double Neck guitars offered in the sale. 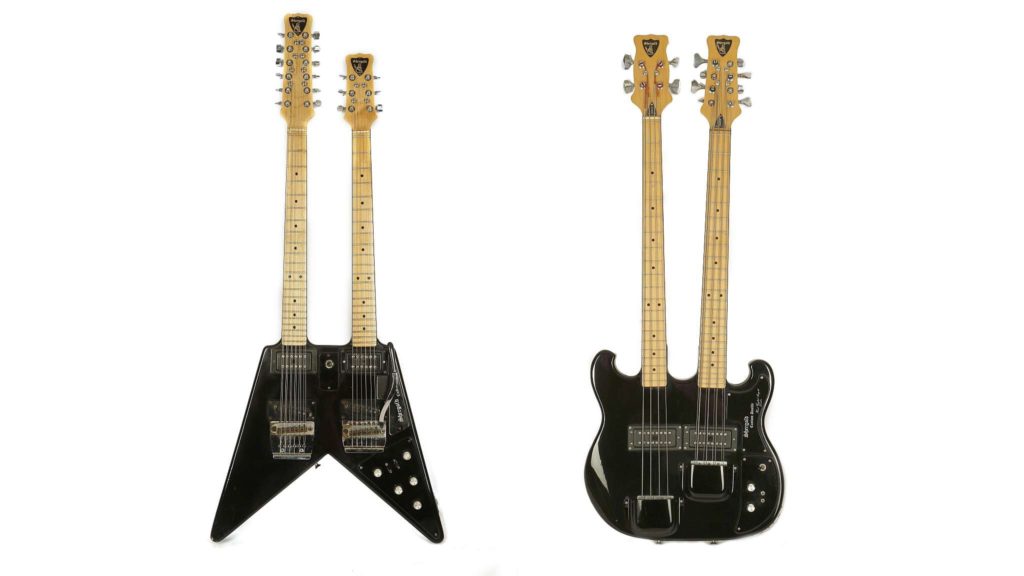 'The Double Neck Guitar is an instrument born of the progressive rock movement of the 1970’s.  Bands such as Genesis, Yes, Rush, Led Zeppelin, The Who, Kansas and the Mahavishnu Orchestra were renowned for prodigious musicianship, outlandish stage sets and costumes, and music of incredible complexity.' - Dr. David MacGregor

In order to perform the 20 minute long conceptual tracks live in concert, progressive rock musicians relied on guitar builders to produce increasingly outlandish custom instruments to allow them to switch between guitar parts in mid song.

Whilst Gibson had manufactured double neck guitars in the 1950’s mainly for Country and Western musicians, and often matching 6 string guitars with a mandolin, it was the late 1960’s and early 1970’s that saw a number of custom builders producing bespoke instruments for a new breed of progressive rock players and their specific needs.  These were usually 12 string and 6 string guitars, 6 string guitars with a 4 string bass, or 4, 8 and occasionally 12 string basses.  One of the foremost custom builders in the U.K. was Shergold who produced instruments for Mike Rutherford of Genesis, Bernard Sumner of New Order and Julian Cope of Teardrop Explodes.

These custom-built instruments have now largely passed into private guitar collections and very rarely come to the market so the two Shergold Double Neck Guitars offered in the auction are a rare and remarkable feature of the sale.

'These were the type of instruments I used of dream of owning and used to read about in Beat Instrumental and International Musician magazine. As an avid Yes and Genesis fan in the 1970's, I would admire these rare custom built guitars at concerts and on album sleeves.' - Dr. David MacGregor

Whilst the 4 and 8 string bass is the standard Shergold Body shape, it is the Flying V Shaped 6 and 12 string, discovered by the vendor during renovation work who was unaware of its real value, that is of particular interest.

'I have never seen a Shergold Custom with that shape before. At first I thought it was an after-market body that Shergold parts had been fitted to, but after careful examination of the parts and how they fit to the body, i realised that it is one of Shergold's own. That makes it pretty rare indeed.' - Dr. David MacGregor