Five things to know about the Apple Boutique

Despite the Apple Boutique’s short life, (the shop was only open for eight months) the legacy of their flower power designs, the flamboyancy of the swinging sixties interiors and the celebrities who partied and shopped there, has become solidify in the minds of many Beatles fans. They are also the focus of two very special lots in our upcoming Modern Design Sale next week.

The Apple Boutique was opened by the Beatles in 1967 on the corner of Baker Street and Paddington Street in London and was considered the band’s first proper business venture. With their ever-growing popularity, the band were advised to invest their huge wealth in a number of companies as a tax-effective business structure. The Apple Boutique in London was part of the planned chain of shops the Beatles intended to open nationally.

The boutique was mostly stocked with vibrant fashionable outfits and accessories as well as some interior pieces including psychedelic furniture in an array of extravagant colours. One example is the table and chair that was sold in the Baker Street shop, which will be going under the hammer in our Modern Design sale on Wednesday 16 October. The Edwardian 'barley-twist' table and Victorian chair in brightly painted colours represents the stores hippie style perfectly. 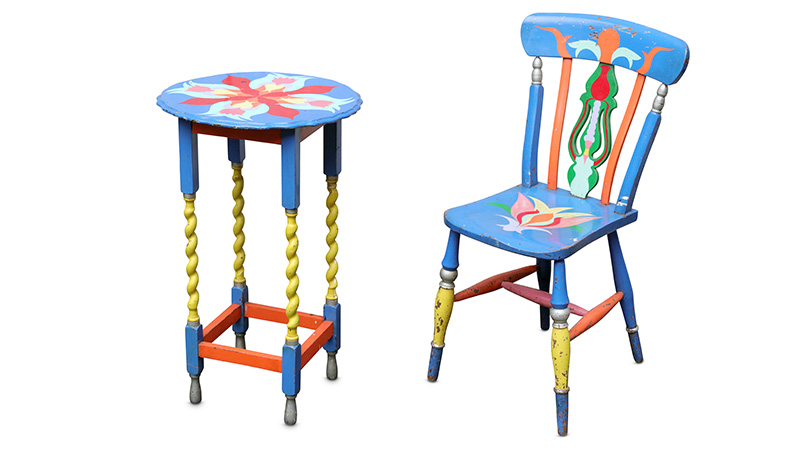 The original concept was that absolutely everything should be for sale. Paul McCartney is believed to have described the shop as "a beautiful place where beautiful people can buy beautiful things".

The Interior and exterior decoration encapsulated the rebellious flower power era, which was carefully curated by design collective, The Fool. The collective was first introduced to the Beatles by Pattie Harrison in 1967 and were comprised of the Dutch designers; Simon Posthuma and Marijke Koeger, along with artist Josje Leeger, and London based Simon Hayes and Barry Finch. They were provided with £100,000 to design and stock the little boutique inside and out. This included the famous multicoloured psychedelic mural on the exterior wall, which contrasted greatly with the white and grey brick of the London streets. Not everyone understood or liked the design which covered three-storeys and it became apparent no planning permission had been granted. Complaints from the local trade and the council started to flood in and they were finally served an enforcement notice and forced to whitewash the wall. The forced change has been considered by some to have been reflected in the juxtaposition of design between the two Beatles albums; from the colourful ‘Sgt. Pepper's Lonely Hearts Club Band’ released in 1967, to the white minimalist design of ‘The Beatles’ also know as ‘The White Album’, released the following year in November 1968.

Due to a bad business model the shop was never a financial success and was eventually forced to close on 31 July 1968. In a press release the brand stated, ‘Apple is mainly concerned with fun, not with frocks. We want to devote all our energies to records, films and our electronics adventures’.

Here are our Top five things you may not know about the Apple Boutique:


The overall ostentatious and psychedelic ethos seem to have had a lasting legacy with interior items still sought after and brands taking inspiration from the store name and aesthetic – does anyone remember the iMac ‘flavours’ computers?

For more information on the Beatles interest-the fool design collective chair and table in our Modern Design sale, contact our Head of Modern Design, Bruce Addison.