Born in Warsaw and trained at the Academy of Arts, Feliks Topolski left his country of origin very young and started travelling through a Europe still recovering from the First World War and heading towards the Second.

In 1935 he moved to the UK, his adoptive country, where he opened a studio and later on became an official war artist for both the Polish and British governments. In this role he started travelling extensively the globe, recording everything he saw in his famous ink and pencil illustrations.

After the war he did not lose his thirst for adventure and kept exploring the world, recording everything in his Chronicles, a fortnightly independent publication, between 1953 and 1979.

Feliks Topolski’s illustrations, however, are not the only record he left of his travels – he was also a keen and eclectic collector, who gathered a varied selection of artefacts from the exotic countries he visited.

Part of his collection will be offered in the next Antiquities and Tribal Art sale here at Chiswick Auction on the 2 February 2016.

The collection includes objects of personal use such as travel accessories and a selection of ethnographic items.

Amongst the highlights is an ‘Eharo’ mask from the Elema people of Papua New Guinea and a large Egyptian wood sarcophagus mask from the Late Period.

On the difficulties of the task of bringing back all these eccentric ‘souvenirs’ Topolski gives us a brief account in his autobiography titled Fourteen Letters:

‘Histrionics at the expensive purchase of a head-hunter’s weapon and the troublesome dispatch of it home. The London junk shops, full then – on my return – of exotic souvenirs costing next to nothing – overflowing with objects gathered by generations of colonials now reduced in circumstances and in space, sweated out on to the uncurious market. I concluded that my traveller’s collection should be made only back in London.’

The 21st Century art market will certainly prove to be more curious for such an eclectic collection from a unique collector. 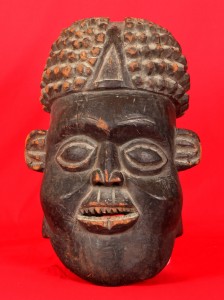 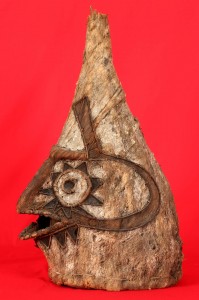