Fine Printed Books and Manuscripts
including Books from the Collection of the late Hans Fellner, Part II
Chiswick Auctions
Wednesday 26 March at 1pm

Following the enthusiastic response to the first part of the Hans Fellner collection offered in November of last year, Chiswick Auctions are delighted to present a further selection (over 180 lots) from this remarkable library.  The catalogue is available on our website now, or in paper form from the office this friday.

Notably in demand in the first sale were English books from the 17th and 18th centuries, and the second selection focuses on this category, with an emphasis on literature, poetry, and the frankly unclassifiable – as one would expect. One thing that has become apparent from working on this collection is that Hans never bought a book carelessly or without judgment – even every “Poems on Several Occasions” (a ubiquitous title of the 18th century) has turned out to have some singular feature – and it would therefore be futile to single out for comment any particular titles here.

Part III of the Hans Fellner collection, with a particular emphasis on economics and political science, will be sold at Chiswick Auctions on June 25th.

Whilst most buyers will, understandably, be drawn to the Hans Fellner component of the sale, there is much else in the sale to whet the appetite. Following on from the Fellner section is a group of early books on Quakerism with a noteworthy provenance. George Whitehead (1636-1723) was a particularly prominent figure in the early history of the movement, and this collection comes by direct descent through the baronetcy. A highlight is an important association copy which brings together George Whitehead and another key figure both in Quakerism and in American history: William Penn’s Wisdom Justified of her Children (1673) bears an inscription by Whitehead recording Penn’s personal gift of this copy in the year of its publication. Furthermore, it contains many contemporary textual corrections whose authoritativeness suggests they are in Penn’s hand. It is bound, as with all the books in this collection, in honest contemporary calf, and, reflecting the fact that it is lacking its title page, is conservatively estimated at £300-500.

Another interesting “association” (stretching the term somewhat), albeit from a different century, appears later in the sale in the form of a 1753 2-volume edition of the works of John Milton which was once the property of Edmund Burke: both title pages bear his stamp “Edmund Burke Beaconsfield”. The set is estimated at £1,500-2,000.

Bringing us into the 20th-century, the sale also includes a Somerset Maugham rarity, again with an excellent provenance, being sold by a relation of the author’s. This is the pamphlet My South Sea Island, published by the Black Cat Press in Chicago in 1936. Only 47 copies were printed, and 5 of the first issue, which misspelt the author’s name on the title page, were destroyed. This copy is – perhaps surprisingly, given that the book was printed without the author’s permission – a presentation copy, inscribed by Somerset Maugham to his favourite niece, Diana, and it is estimated at £500-800.

Another presentation copy from the last century is Winston Churchill’s A History of the English-Speaking Peoples. This is a set of the first English edition, and Churchill has inscribed the title of the first volume, “To Hinchingbrooke from Winston S. Churchill, May 1956.” Hinchingbrooke was Alexander Victor Edward Paulet Montagu, 10th Earl of Sandwich, and Conservative MP for South Dorset from 1941 to 1962. He was a radical backbencher who set up the Tory Reform Committee in 1943. The set, in original cloth, but without its dust-jacket, is estimated at £500-800, and is being sold by a direct descendent of the recipient.

In a sale particularly rich in fine bindings, one example stands out. The book itself is a fairly common or garden Danish prayer book from c. 1680, but it is exceptionally finely bound in elaborate contemporary silver wire on blue velvet, with the Lamb of God embroidered on the front cover and a winged sacred heart on the back. Bindings of this sort were always made to commission, although the book itself details no obvious provenance. An extraordinarily beautiful and arresting object of museum quality, in superb condition, it is estimated at £2,000-3,000 (see illustration).

Other notable lots in this highly varied sale include Johannes Gerson’s Opera, an incunable from c.1483, incomplete and in a rather sad state (hence £300-500), Elizabeth Grey’s A Choice Manual, or, Rare and Select Secrets in Physick and Chirurgery (1659, £400-600), Robert Burton’s The Anatomy of Melancholy, a fourth edition of 1632 (£300-500), a 4-volume set of The Arabian Nights from 1835, unremarkable except that each volume is signed and inscribed by Edward Lear, detailing that they were the gift of the sculptor R. J. Wyatt in Rome (£300-500), a substantial set of the works of John Ruskin in 54 volumes, various sizes, finely bound by Zaehsndorf and Ramage in full green morocco (£1,500-2,000) and a first edition of George Orwell’s Animal Farm in a good jacket (£700-1,000). The sale concludes with a fine collection of geological books (50 lots) which were the property of the late John C. Thackray (1948-99), formerly Archivist of the Natural History Museum and Honorary Archivist to the Geological Society.

Public viewing starts at Chiswick Auctions on Sunday 23 March from midday to 6pm, on Monday 24 and Tuesday 25 from 10am to 6pm, and on Wednesday 26 from 10am to 1pm. Please note that the sale itself starts at 1pm. It is currently available to view at www.chiswickauctions.co.uk

Chiswick Auctions Fine Sale is also set for 15th April, so please put this date in your diary too.  We are accepting lots until the end of March. 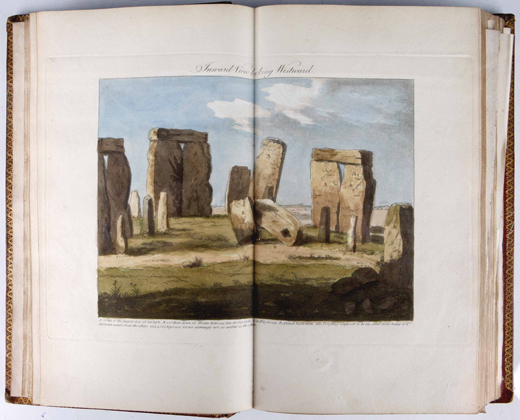 CLARKE, Edward Daniel (1769-1822)]. A Tour through the South of England, Wales, and part of Ireland, made during the Summer of 1791. London: Printed at the Minerva Press, 1793. 8vo (218 x 130mm). Hand-coloured plan and 5 fine hand-coloured aquatint plates of Stonehenge, 6 other fine hand-coloured aquatint plates, and 14 additional engraved topographical plates loosely-inserted at the relevant page. Contemporary red straight-grained morocco gilt, gilt edges (extremities rubbed). Provenance: extensive later pencil annotation at the front. FIRST EDITION of the author's rare first work, which he later suppressed. It is dedicated to his tutor Henry Tufton, who accompanied him on the tour. RARE complete and with hand-coloured plates. £300 - £500