Our third auction of antique picture frames is now live, with the sale timetabled for Wednesday 9 February 2022 at 2pm. The present collection, spanning the 16th to 21st centuries and comprising 61 selected lots from the Dutch and Flemish, Italian, English, and French masters, represents the highest levels of past and present-day frame makers.

Framing history: a geographical tour through the sections of our sale 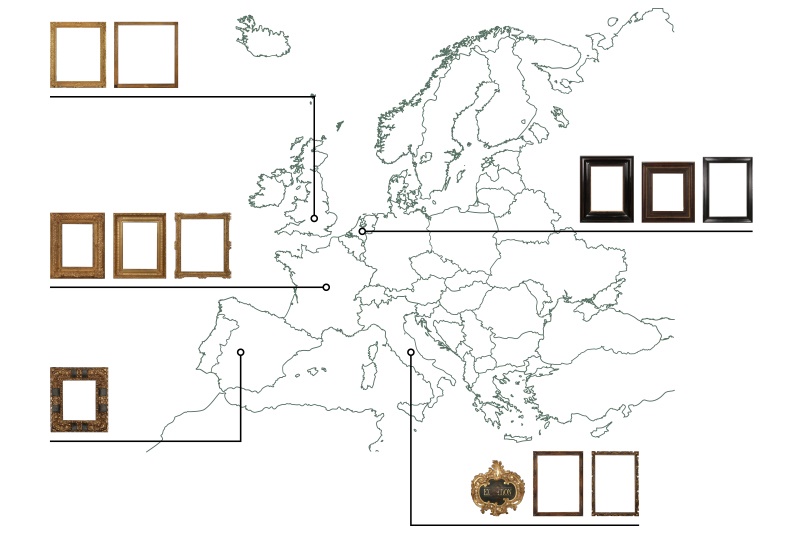 We start with the Dutch masters, with their sober ebony veneers and ripple effect mouldings. Dutch frames provide a complete contrast to the frames developed in France, Spain and Italy in the later sections of our sale. While gilded frames were also made by the Dutch and the Flemish, the dark wood mouldings were popular for two reasons. 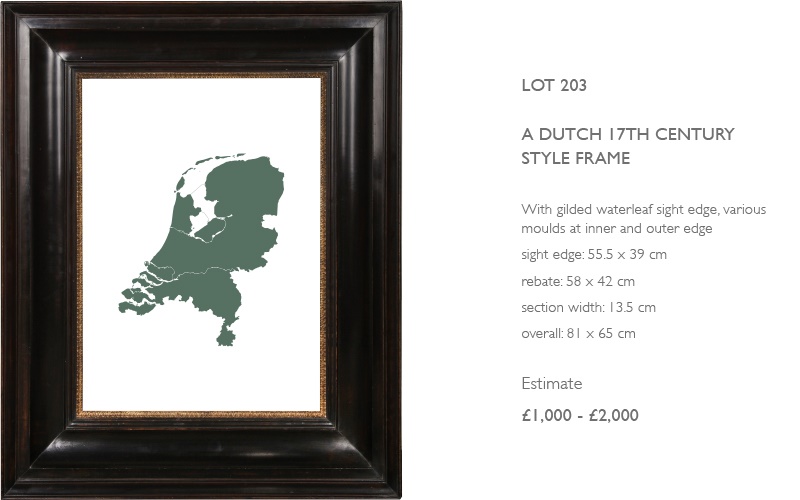 Firstly, religion. As the region became more Protestant from the 16th century onwards, styles became more subdued, in contrast to the showy decorative gilding of the Catholic areas of Europe.

Secondly and more practically, houses in the Netherlands were taxed according to their frontage: the narrower the house, the lower the tax. As a result of this – plus the weather and narrow streets – interiors tended to lack natural light. To get around this, windows were big, and the walls and floor were painted pale to reflect natural light. Dark frames looked better in this environment; gilded frames would have been too jarring. Dutch colonies provided costly materials such as ebony and tortoiseshell, and where these were not available, woods were stained black, and clever painterly techniques used to simulate their more costly natural counterparts such as marble.

The Dutch favoured a ‘ripple and wave’ effect, seen in many of the Dutch lots in our sale. ‘Dutch ripple’ frames were also produced in other parts of Europe and particularly Spain, given that the Hapsburg Empire ruled both Spain and the area we now know as the Netherlands. Our next section is reserved for the more restrained English. 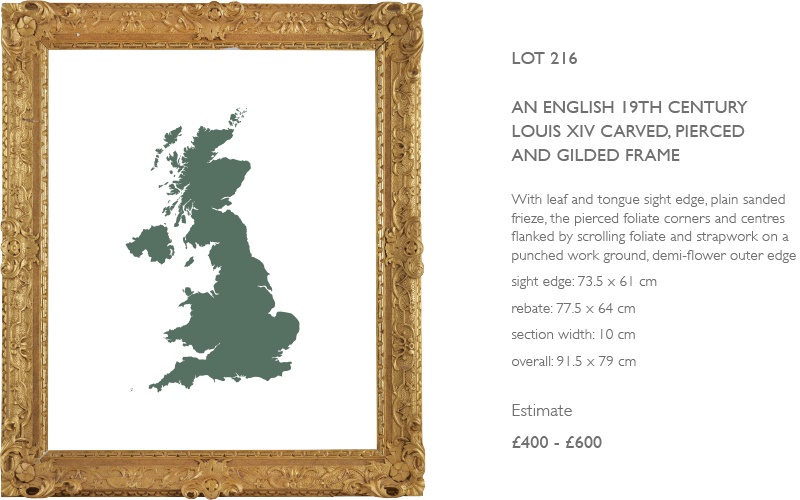 English frames were often very simple in style, and usually made of oak, before composition became widely used in the 19th Century. Composition or ‘compo’ is a substance that simulates carved wood and is usually made from a mixture of chalk, animal glue, linseed oil and resin that is pressed into rigid moulds

Lot 214 is potentially the oldest frame in our offering, a rare mid-to-late Tudor frame, made with oak and ebonised, reflecting the more restrained English style. Frame makers were greatly influenced by the European styles; other English frames in this section reflect this, and indeed, this frame could be Dutch.

The onset of the Industrial Revolution favoured woodworking machines over artisans, and frames became mass produced, cheaper and more utilitarian in design during the 18th and 19th centuries. 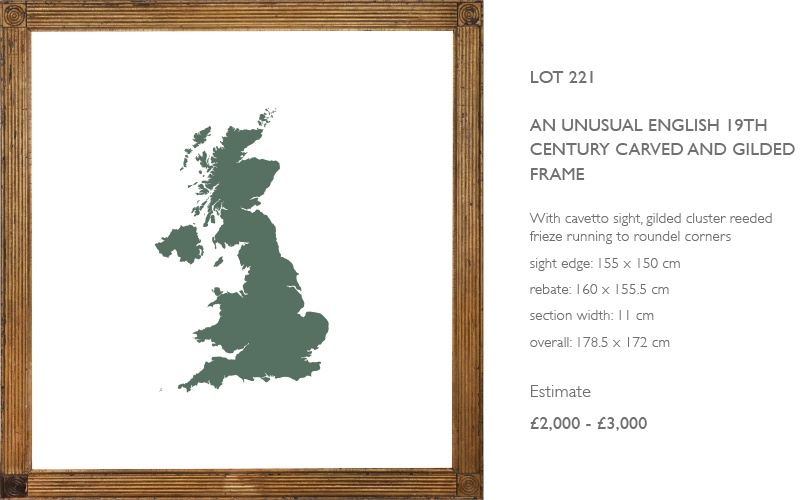 We now move south to Italy.

During the Renaissance, Italy was the centre of the frame world. Before the 15th Century, elaborate altar pieces were built to house religious art (see Lot 222 for a 16th Century example). As wealthy people started to acquire more secular paintings, lighter, more versatile frames were developed, to protect paintings and assist in the portability between great houses and regions. They were also a great way of displaying wealth. Beautiful frames became significant works of art in their own right. Quite often, the frame would be commissioned before the painting, and frame makers were as important and as celebrated as artists! 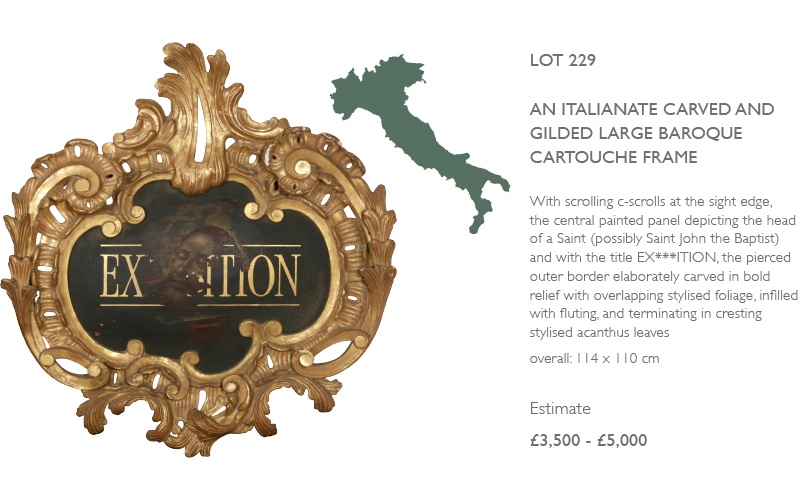 Different regions of Italy developed their own styles especially Florence, Venice and Tuscany.

In 16th Century Venice, frame makers were inspired by the style of sculptor and architect Jacopo Sansovino. Sansovino frames stand out for their elaborate embellishments such as winged cherub heads and scrolling clasps – see Lots 225 and 238.

In the late 17th Century, auricular frames began to appear – basically, shapes of ears or ear lobes in the design of the frame. Italian baroque artist Salvatore Rosa designed a frame that now bears his name (see Lot 234). It was a very simple, without elaborate decorative carvings. A similar design, called the Carlo Maratta or ‘Carlo’ frame (for example, Lot 223) became very popular in England where it was used to frame portraits. The decoration of such frames tended to focus on rows of decoration such as egg and dart or ribbon and stave ornamentation.

Cassetta frames (e.g. Lots 232, 233 and 235) – cassetta means ‘little box’ – were designed for secular paintings to be easily moved. It could incorporate many different kinds of decoration such as sgrafitto – the process of scratching a design onto a surface (sgrafitto means ‘to scratch)’; pastiglia – a moulded substance to add a raised decoration to a frame; marbelizing – using paint to simulate the appearance of marble or tortoiseshell on a frame; punchwork – working with shaped punches to create a design onto a surface to provide texture and create different effects under light – see Lot 233. 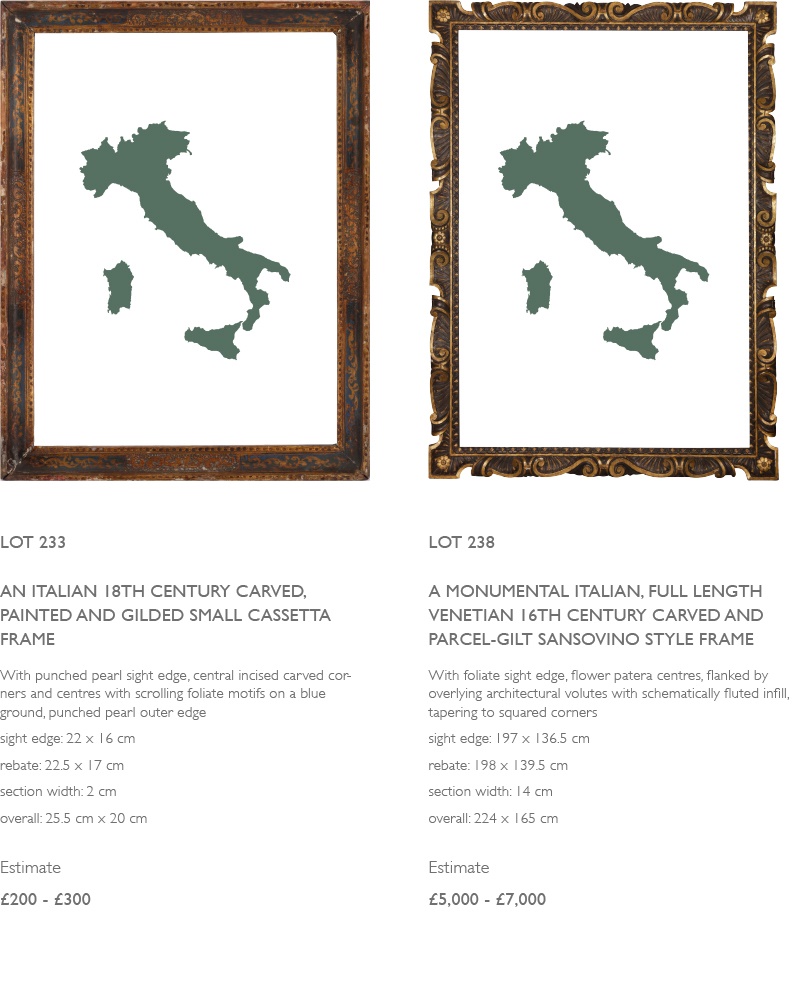 Our sale features just one splendid example from Spain. 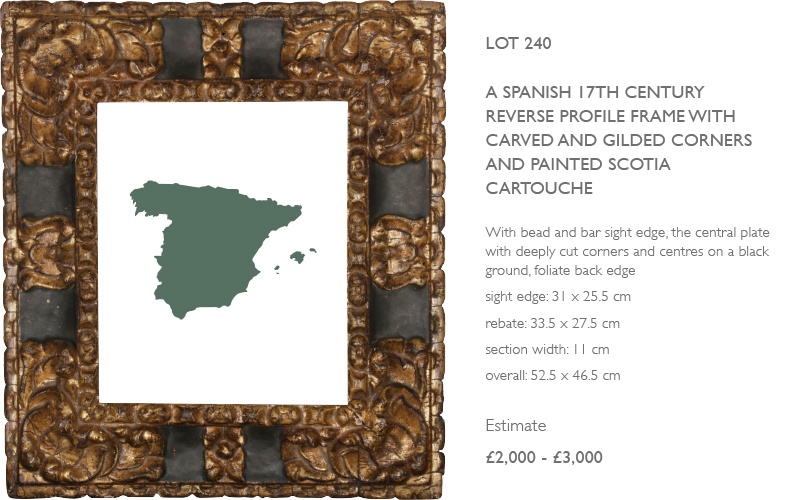 Although greatly influenced by the Italians, other factors led to the development of a certain flamboyant Spanish style. Philip II acquired Dutch frames when the Netherlands was a Spanish colony, and colonies further afield such as Mexico and Peru also influenced the style of Spanish frames. The peak of Spanish frame making was in the 17th century. Frames from this period have large sculptural carvings and elaborate decoration and were certainly bold and made a statement.

And finally to the 'golden age of frame making' in France.

This period commenced in the 17th Century when France became the artistic centre of the world. The development of French frames over this period can be closely aligned with whichever ‘Louis’ was on the throne, as each brought their own style to bear. 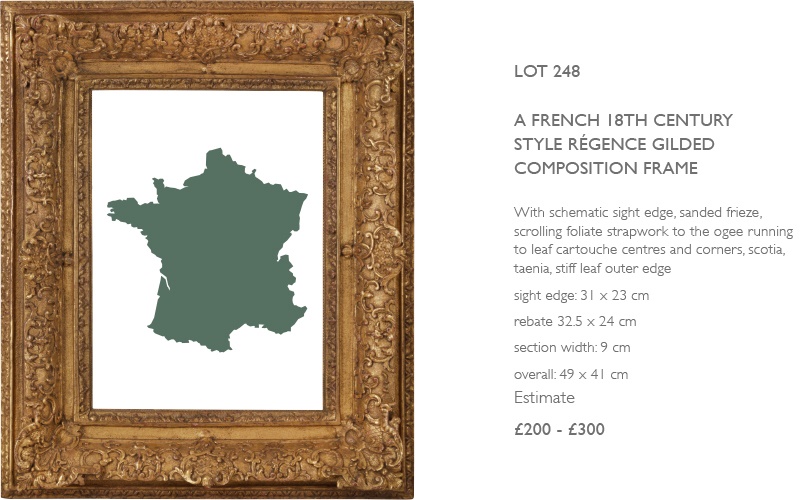 Frame style during this period is characterised by very decorative ornamentation with design inspired by nature and echoing the elaborate Baroque details of French architecture and interior decoration. Continuous carvings of foliage were very popular, often accompanied by carved ribbons. Louis XIV – the Sun King – loved excess; frames from this period are heavy, ornate and boldly carved with pronounced corner and centre elements, including sunflowers in homage to the king.

In the 18th Century, French frames remained opulent but with more delicate decorations, and incorporating some empty spaces to balance the ornament. The ‘Rococco’ style brought in a new pricing formula, where decorations such as ribbons or shells were charged as an extra cost. One way to bring the cost down was to substitute ‘compo’ for wood. Initially slow to catch on and considered inferior, compo would eventually replace wood by the end of the 19th Century. 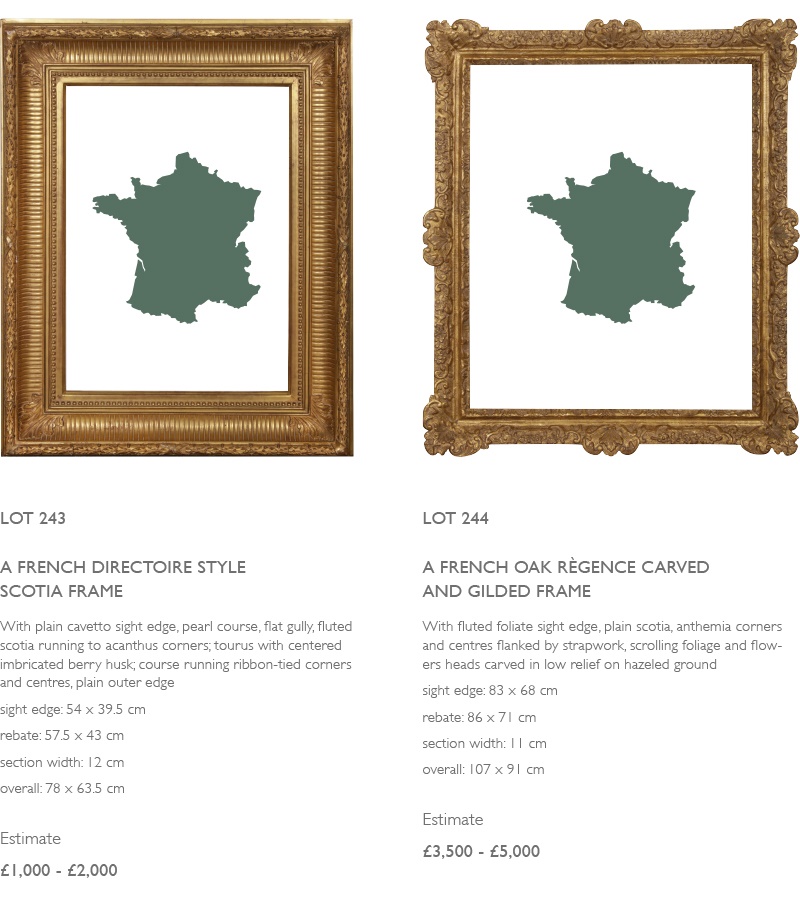 We hope you enjoy browsing through the online catalogue and learning more about the substance and grandeur of picture frames. A second story to support this wonderful sale will be out later this week, and will focus on our top picks, how to choose the right frame for a painting, and very importantly, how to inspect an antique frame before deciding to bid!

*Geographical note: we are aware that countries such as the Netherlands and Italy did not exist in their modern entities during the period under consideration, but modern names have been used for ease of reference.