Ahead of the Watches auction on 12 September, we dive into the underwater world with a deep sea legend - the Blancpain Fifty Fathoms. 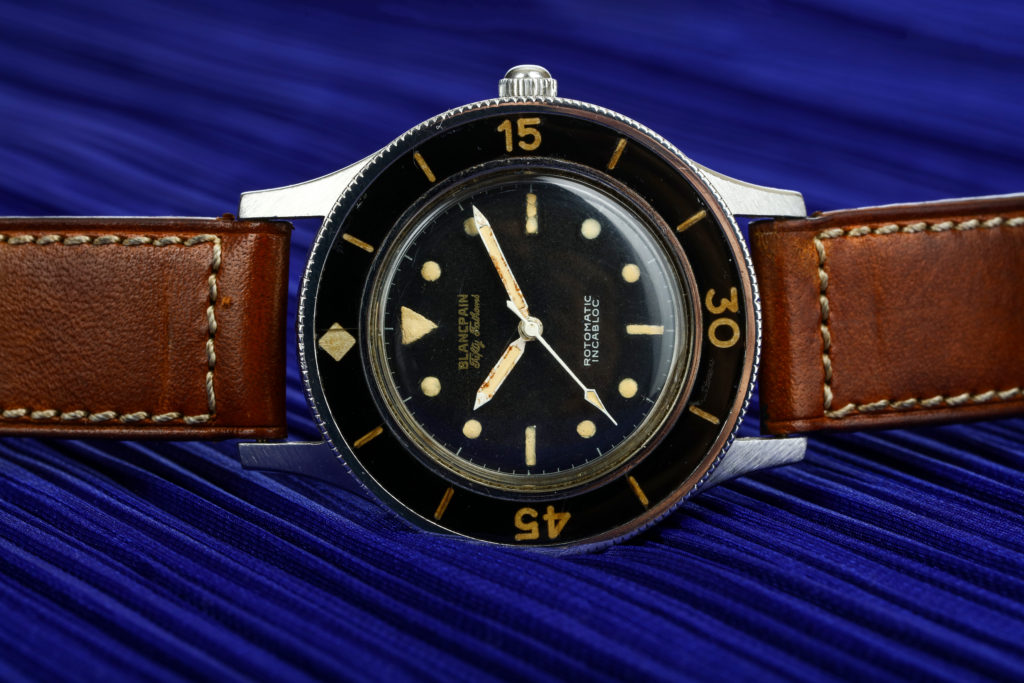 More than sixty years ago, before the Rolex Submariner and Omega Seamaster were even conceived, a diving legend was born. Marking an incredible moment in horological history – the now rare and collectable Fifty Fathoms was created and continues to have considerable wow factor 64 years later. It defined what a great dive watch should/could be, establishing the rules and specifications for all that have followed. With its high legibility, rotating bezel with 60min scale and dark dial with large luminescent numerals, it continues to inspire designers, collectors and divers alike.

As with most major technological developments in history, military demand was the driving force behind the creation of the Fifty Fathoms.

In the early 1950’s, the French Navy Captain Bob Maloubier and Lieutenant Claude aspirant Riffaud, of the ‘Nageuers de combat’, or combat swimmers – required a watch rugged and reliable enough to safely accompany his specialist force to the deepest waters during difficult missions.

Maloubier drew up requirements for his ideal watch but no company wanted to invest in what was considered a niche market. Unable to find a suitably keen manufacturer, he himself drafted preliminary sketches of what would ultimately become the Blancpain Fifty Fathoms. Eventually, Maloubier and Riffaud contacted the CEO of Blancpain, Jean-Jacques Fiechter, who was an avid diver himself and he accepted the challenge.

‘After all, we agreed with a small watch factory, Blancpain, to develop our project: a watch with a black dial, large, bold numerals and clear markings, as well as an outer rotating bezel. We wanted to be able to align this bezel with the large minute hand, in order to easily know our remaining oxygen time. And we wanted all those markers to clearly glow in the dark.’ – Captain Maloubier

After its release in 1953, the model proved to be robust and with no real contemporary competition went on to serve Israeli, Spanish, German and the United States special forces, proving crucial to specialist dive teams undertaking sabotage, coastal raids, underwater reconnaissance and the like. Furthermore, Jacques Cousteau and director Louis Malle used the Fifty Fathoms during the shooting of ‘Le Monde du Silence’ – a 1957 award-winning underwater film.

Measuring 41mm, which was notably large for its time, the watch was waterproof up to a depth of fifty fathoms, the deepest a diver could go without a compressed air tank – hence its name. Water resistance was obviously a fundamental element of its design and its screw down case back protected it's automatic movement excellently. The self-winding rather than manually wound mechanism meant that divers would not need to unlock the crown except to reset the time, thus maintaining a sound seal.

Its size was due both to maximising legibility and to make room for the external rotating bezel – the first of its time and a safety mechanism that would allow the diver to line up the 12 o’clock triangle with the minutes hand when starting a dive and thus making it clear how many minutes had elapsed when underwater.

‘The Fifty Fathoms are a collecting clique all of their own and if you have the money, patience and luck, they represent an exciting, challenging and rewarding choice of collecting discipline.’ – Matthew Caddick, Head of Watches

Over 50 derivatives of the Fifty Fathoms were produced, many for specialist military/industry use and never for public purchase. Given their limited production numbers and the demanding conditions that these watches were subjected to, finding any example for sale, let alone a good one, can be a challenge.

'It's rare these days for me to 'fall hard' for a watch, after all I'm gifted exposure to so many great timepieces throughout the year, but this one...like me, everyone seems to want it.' - Matthew Caddick, Head of Watches