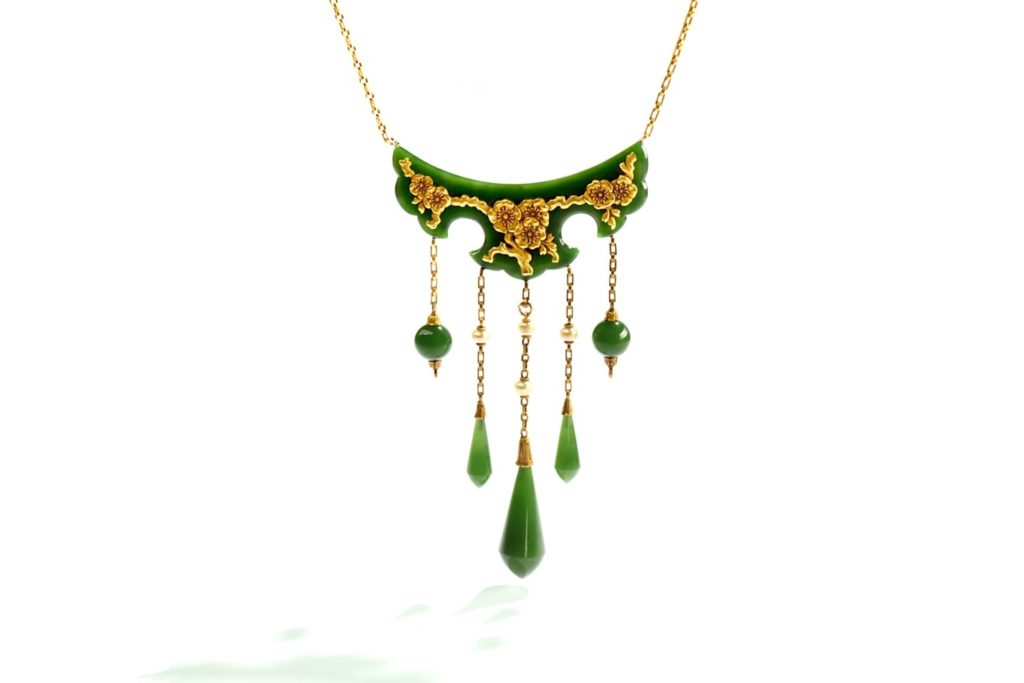 Ahead of the forthcoming Jewellery auction taking place on 15th May, we speak to Head of Department Sarah Duncan about the discovery of a rare necklace by the eminent early 20th century French jeweller René Boivin offered in the sale.

What are the key features to consider when authenticating jewellery?

One should think of jewellery in two categories, those that are by particular jewellery houses or designers and those which are not, but still hold their merit due to the gemstones or workmanship. When considering ‘signed’ pieces, it is useful to have a good working knowledge, almost a back catalogue, to constantly be referring to. For instance, Cartier has a certain formula to their signatures and when you have handled enough pieces you start to see the little details that you need for authentication. Sometimes, I just pick up a piece and know the weight and feel is not right. It also makes this job fascinating as you always need to keep learning, looking and feeling.

Is this the most exciting ‘discovery’ that you have seen during your career?

In terms of value, I had the pleasure back in 2015 to inform a client that a pair of late 19th century earrings were set with a remarkable pair of Kashmir sapphires. She was quite surprised to hear they could be worth a considerable amount of money. They ultimately sold at a London auction for over £1.5million (inc premium). However, my personal passion is for antique jewellery and since joining Chiswick Auctions at the beginning of 2017 I am delighted that we have been able to enlighten quite a few of our clients regarding the origins of their pieces. In May last year we were thrilled to offer a necklace which had been made by the highly sought after 19th century goldsmith Carlo Guiliano. The vendor had actually found the necklace 40 years ago and it had sat in a drawer untouched without the owner knowing its true history and ultimate value.

Is there any evidence to suggest why this piece, unlike others by Boivin, is not signed?

When the vendor presented this necklace to me, I was immediately struck by the workmanship of the cherry blossoms as they are so lifelike. This was clearly something which was made by a master craftsman. I was also struck by how the solder marks on the back were lovingly shaped into hearts. I had never seen that attention to detail before on something which would not have been visible when it was worn. The piece is only stamped with a marker’s mark and no signature stating the name of its creator. The maker’s mark is slightly unusual for Boivin which caused me to pause in immediately authenticating it. However, French laws would have prevented anyone else from using that same combination of initials and marks. The chain on the necklace was really the key. I compared the piece with early René Boivin pieces and I found another unusual necklace dated 1910 which had sold in Geneva 2014 for over 100K Swiss Francs. This necklace had the same distinctive box and belcher-link chain as the necklace I had sitting on my desk. From that point on it was simply a matter of proving it. 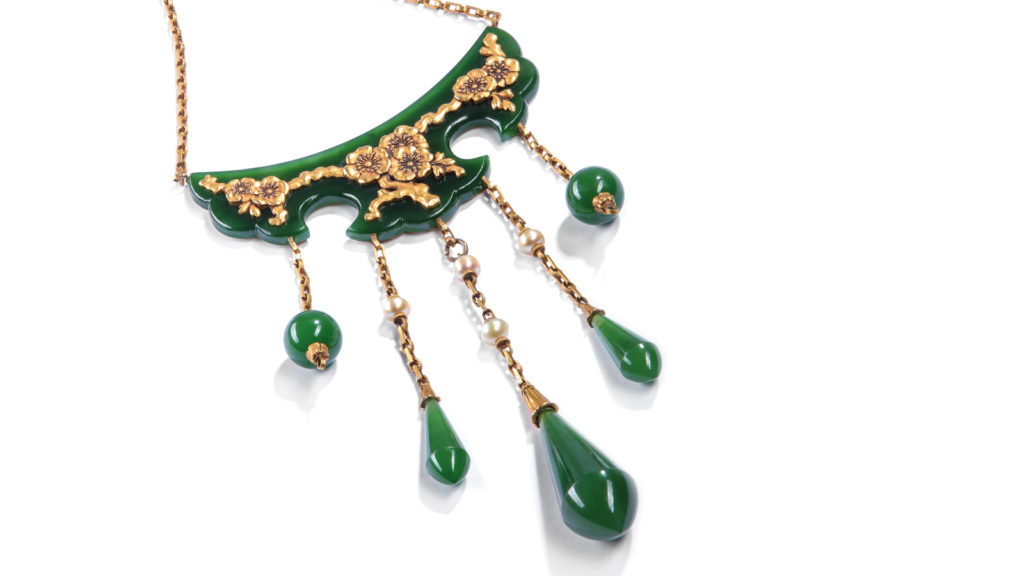 How was the piece officially authenticated?

Research in to jewellers and jewellery houses is sadly, and sometimes frustratingly, not as developed as it should be, especially when you compare the academic work done on say paintings. However, luckily there was a highly scholastic work published in 1994 on René Boivin. I spent the afternoon at the National Art Library in the V&A Museum studying Boivin’s early work and when I saw this exact necklace illustrated almost life size I was delighted. We also contacted the author of the book in Paris, who was happy to confirm its authenticity. She remembered the necklace from when she was preparing the book and her belief is that Boivin only made one of these necklaces.

What makes the piece particularly rare?

René Boivin really liked to challenge perceptions of what a jewel had to be. He liked to use unusual material that at the time would never have been accepted by contemporary fine jewellers. Boivin’s pieces could be made out of wood instead of platinum and set with semi-precious stones instead of diamonds and mainstream gemstones. Boivin had a scholastic passion for antiques and would keep pieces in his collection for many years before selling them. His interest in the exotic ultimately influenced the jewellery he made. He undertook a series of works themed around different cultures and civilizations such as the Iron Age, Mesopotamia and the Far East. This necklace represents his interest in Japanese culture and the use of nephrite and the beautifully modelled cherry blossoms are classic representations of that culture. More broadly, there was a surge in interest in Japan in the early part of the 20th century and this necklace tapped into those trends which were starting to permeate Western fashions. Boivin’s culturally inspired pieces were not the most sought-after amongst his collections and thus production was fairly limited. Today, the burgeoning interest in the designer’s work means that the more obscure collector’s pieces are highly sought-after by collectors.

What is the market for pieces by Boivin?

The Masion Boivin is now considered to be one of the most innovative of the 20th century. The most collectable period is works from the 1920-40s, a period when Boivin’s wife became head of the firm following the designer’s premature death. Certain iconic pieces from the Masion have gone up drastically in value in the last 20 years. Two of the most iconic pieces produced have increased by 295% and 433% in value respectively since the mid 1990's. The interest in Boivin pieces at auction and at premier international trade fairs shows no sign of lessening.