For ‘Cinderella of Chinese Art’ 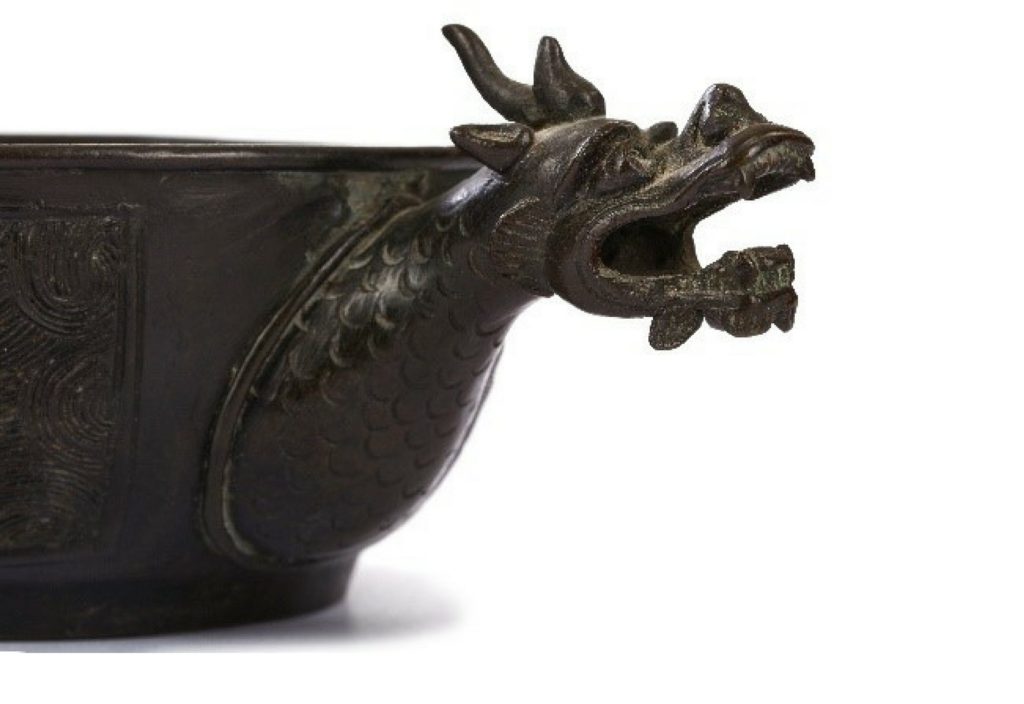 Chinese later bronzes, the term designated for pieces created from the Song Dynasty through to the Qing Dynasty (10th – 20th Century), are rapidly becoming one of the hottest areas of the Chinese art market. Long considered ‘the Cinderella of Chinese Art’, Chinese bronzes have undergone relatively little academic study and commercial interest, but this is changing fast. A number of recent exhibitions and private collection sales in Hong Kong and on the Chinese mainland have revitalised interest in this long-undervalued area. Prices have gone up sharply in the last five years, as collectors and dealers invest in an area where money still goes a surprisingly long way relative to the categories of ceramics, jades or other specialisms.

The dedicated sale of Chinese bronzes taking place in May, which offers work from a selection of private collections, will cater to this groundswell of interest. Ahead of the auction, Head of Asian Art Lazarus Halstead explores the categories that constitute this flourishing field through a selection of highlights offered in the sale. 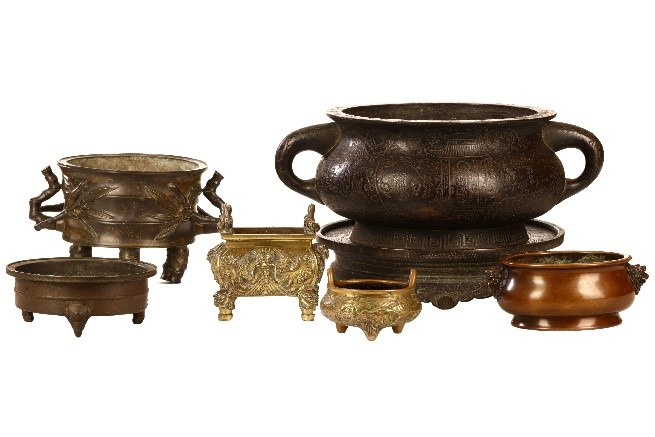 Bronze censers are an archetypal form within later Chinese bronze. They are typically of tripod or blombé form, with handles set on the shoulders or looping from the rim. However, they do exist in an infinite number of variations, as illustrated above. Their size, shape, patination, gilding or lack thereof and the subject of their decoration are all open to creative variation. 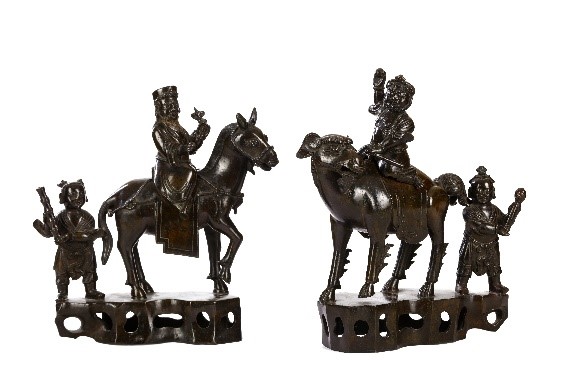 The burning of incense is also put to creative use through bronze censers with animalistic forms. The sale will offer a number of censers formed as historical and literary figures riding animals who have their mouths open for the dramatic release of smoke. The pair of censers illustrated above depict Zhang Guolao and Li Tieguai, two of the Eight Immortals, each riding upon a creature and with boy attendant standing by.  The two censers shown below depict the prominent Chinese poet of the Tang dynasty, Du Fu, on a horse and the ancient Chinese philosopher and writer, Lao Zi, riding a buffalo. 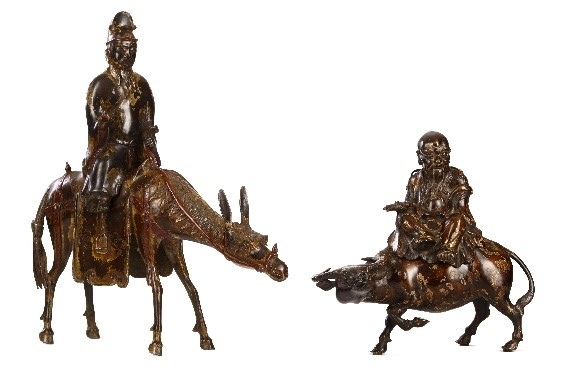 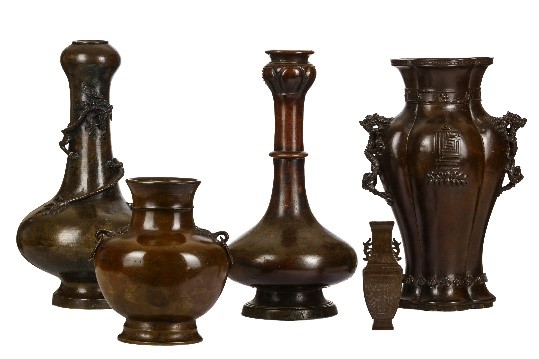 Bronze vases exist in a variety of shapes and sizes, ranging from miniature tool vases designed for holding incense through to monumental temple vases. They may be plain or with applied decoration, or inlaid with silver. 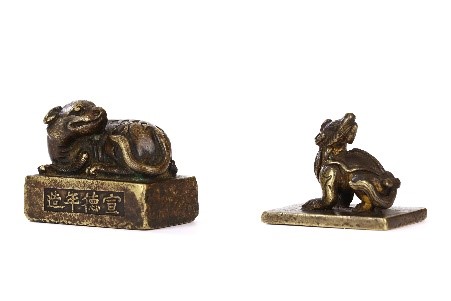 Bronze objects from the scholar’s table make up a diverse range of small scale objects. The two weights illustrated above each depict a seated animal raised on a rectangular plinth.

Interestingly, they both exhibit variations of the Xuande mark, the most common mark in bronzes and well represented in censers and vases. The reign mark of the Xuande Emperor, who ruled China between 1425 and 1435 during the Ming Dynasty, is a standard mark from that date onwards. Mark and period Xuande bronzes are often considered the holy-grail of later Chinese bronzes and cloisonné enamel pieces bearing the mark have been securely dated to the period. However, bronzes remain harder to pin down. 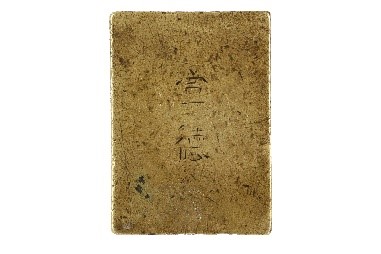 Scholars have argued that incised marks, such as the example shown above, are most likely date to the Xuande period (see Sotheby’s, 2015, Later Chinese Bronzes from the Collection of Mr and Mrs Gerard Hawthorn). 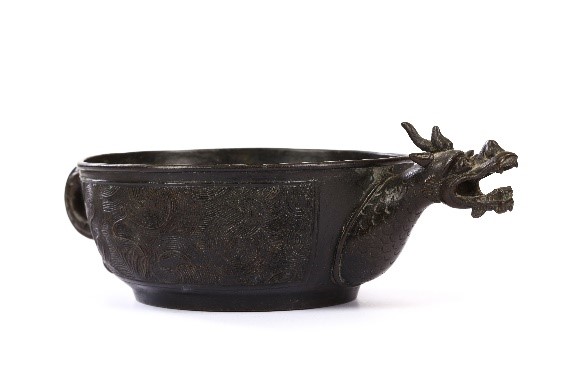 The dragon-like head forms the spout of the vessel, whilst the tail forms the handle. Panels of swirling waves decorate the exterior sides of the vessel, as though the creature is passing through the waves. The stylised waves appear to re imagine those which typically decorated Yuan Dynasty bronzes, in a highly stylised and abstracted manner. The piece also bears a resemblance to the zhun vessel represented in the handscroll of the Yongzheng Emperor. Interestingly this piece, which hails from a Portuguese private collection formed in the first half of the 20th century, is thought to have originally formed part of the Chinese Imperial collection.

Many works of later Chinese bronze follow the archaic forms of China’s first bronze age, which started 4000 years ago with the Shang and Zhou Dynasties. The inclusion of magical and mythical animals was an important aspect of the ritual function of these pieces. A vessel with clear symbolic meaning is the ewer illustrated above, which is closely comparable to a piece housed in the Kresko collection of Later Chinese Bronzes from the 12th through to the 18th centuries. 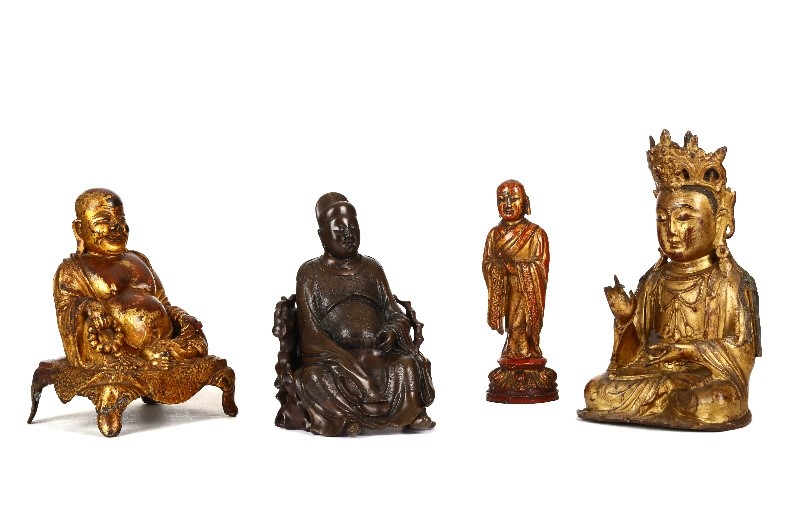 Sculptures of Buddhist figures such as the Buddha, Anada and Guanvin, or the secular figure of the seated scholar shown above illustrate varied and characterful renderings of the human form, which embody the contemplative, divine or humorous and continue to be a staple of Western collecting tastes.

We are accepting entries for the sale until 16th March 2018. Please contact Head of Department Lazarus Halstead: lazarus@chiswickauctions.co.uk