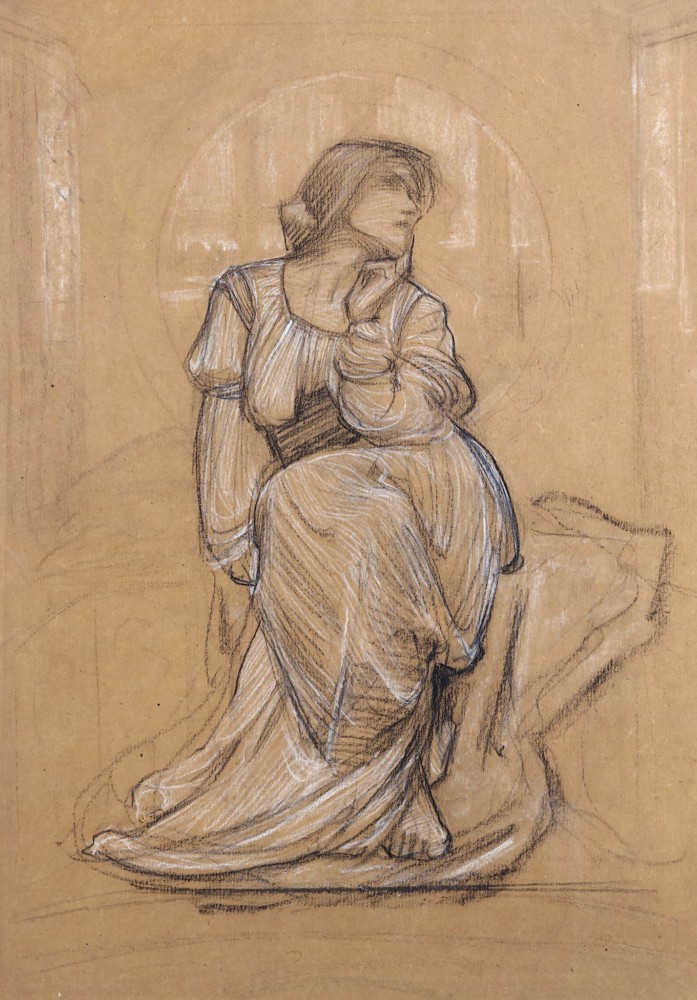 Ahead of auction of British & European Fine Art with Portrait Miniatures on 12th December, we take a look at a selection of portraits and landscapes offered in the sale that would make memorable gifts for Christmas.

‘The Lady of Shalott’ is a ballad by English Poet Alfred, Lord Tennyson (1809 – 1892) and was a source of inspiration for the Pre-Raphaelites who were fascinated with Arthurian subject matter. Harold Speed studied at the Royal Academy between 1891 – 1896, where he was awarded a travel scholarship in 1893. In 1896, he was elected as a member of the Royal Society of Portrait Painters. Speed’s instruction manuals, which combine pragmatic advice with reflection on the meaning of artistic practice, have long been considered valuable resources for artists and editions of ‘The Practice and Science of Drawing’ (1913) remain in the public domain today.

Don’t miss ‘Reflections: Van Eyck and the Pre-Raphaelites’ currently on display at The National Gallery, London. 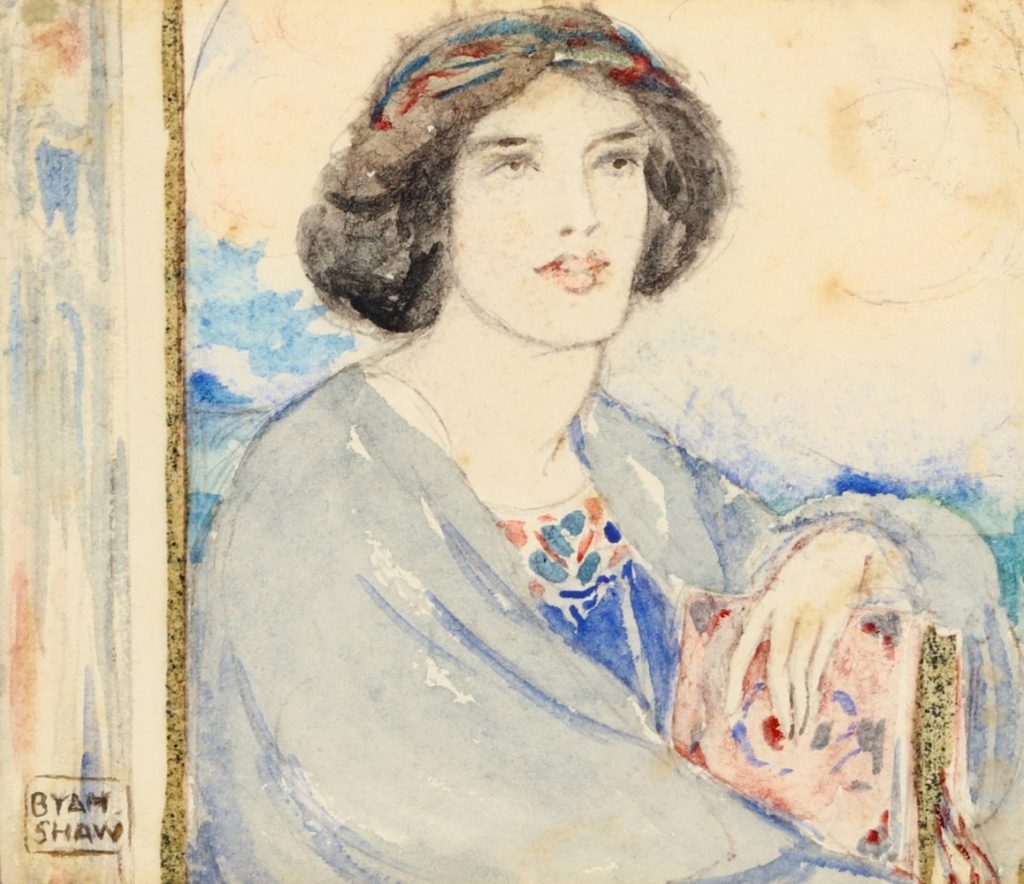 Inspired by the poems of Dante Gabriel Rossetti (1828 – 1882), one of the founders of the Pre-Raphaelite brotherhood, John Byam Liston Shaw (1872-1919) embodied the final breaths of authentic Pre-Raphaelitism. In 1887 at aged fifteen, Shaw’s work was shown to another founder of the brotherhood, John Everett Millais, who recommended that he enter the St John’s Wood Art School. From 1890, Shaw studied at the Royal Academy and in 1892, he was awarded the Armitage Prize for his work The Judgement of Solomon.

Shaw’s desire to revive the Ruskin-Millais ideals of realism and moral commitment that Pre-Raphaelitism was founded upon, which had drifted towards religiose symbolism, was in part successful during a time of shifting tastes and in 1910, along with fellow artist Rex Vicat Cole, he founded the Byam Shaw and Vicat Cole School of Art in North London. This was later renamed The Byam Shaw School of Art, which still exists today, as part of Central Saint Martin's College of Art and Design.

These vignettes by Myles Birket Foster are fresh to the market and encapsulate the artist’s travels to destinations far and wide, including Italy, Scotland, the Rhine Valley and the Swiss Lakes. Foster’s friends included prominent artists Edward Burne-Jones and William Morris and he decorated his home near Godalming in Surrey with tiles and paintings from their firm, Morris and Company. Foster exhibited approximately 400 paintings at the Royal Academy of Arts over more than two decades.

This original work by Sir George Scharf is inscribed, ‘….of Crooked Lane removed for approach to new London Bridge 1831.’ The work illustrates a view of St Michael Crooked Lane that is now lost. Originally built around 1270 and extensively developed in the 14th century, it was then burnt down in the Great Fire of 1666 and rebuilt by Wren, or Hook in 1684 –98. In 1831, the street was demolished to accommodate for a widening of the approach to the rebuilt London Bridge, when the parish was merged with St Magnus the Martyr. The work also depicts the premises of Willets, the gun flint manufacturer to the Hon. East India Company. 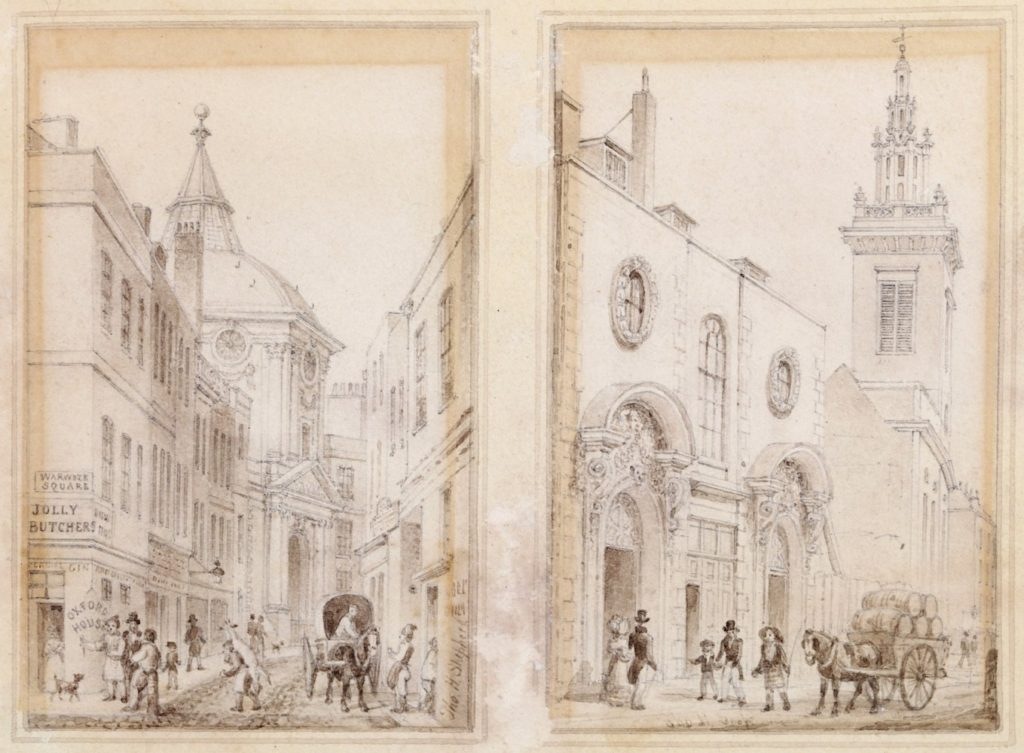 Four original drawings by Thomas Hosmer Shepherd, two of which are illustrated above, were engraved and published in ‘London and its environs in the 19th Century: illustrated by a series of views from original drawings’ in 1831, illustrated by Thomas Hosmer Shepherd and James Elmes. The drawing displayed on the left, titled ‘Physician’s College, Warwick Lane’, (shown above) looks down Warwick Lane towards the entrance to the Royal College of Physicians. Part of the ‘Jolly Butchers’ is also on view in the left foreground. 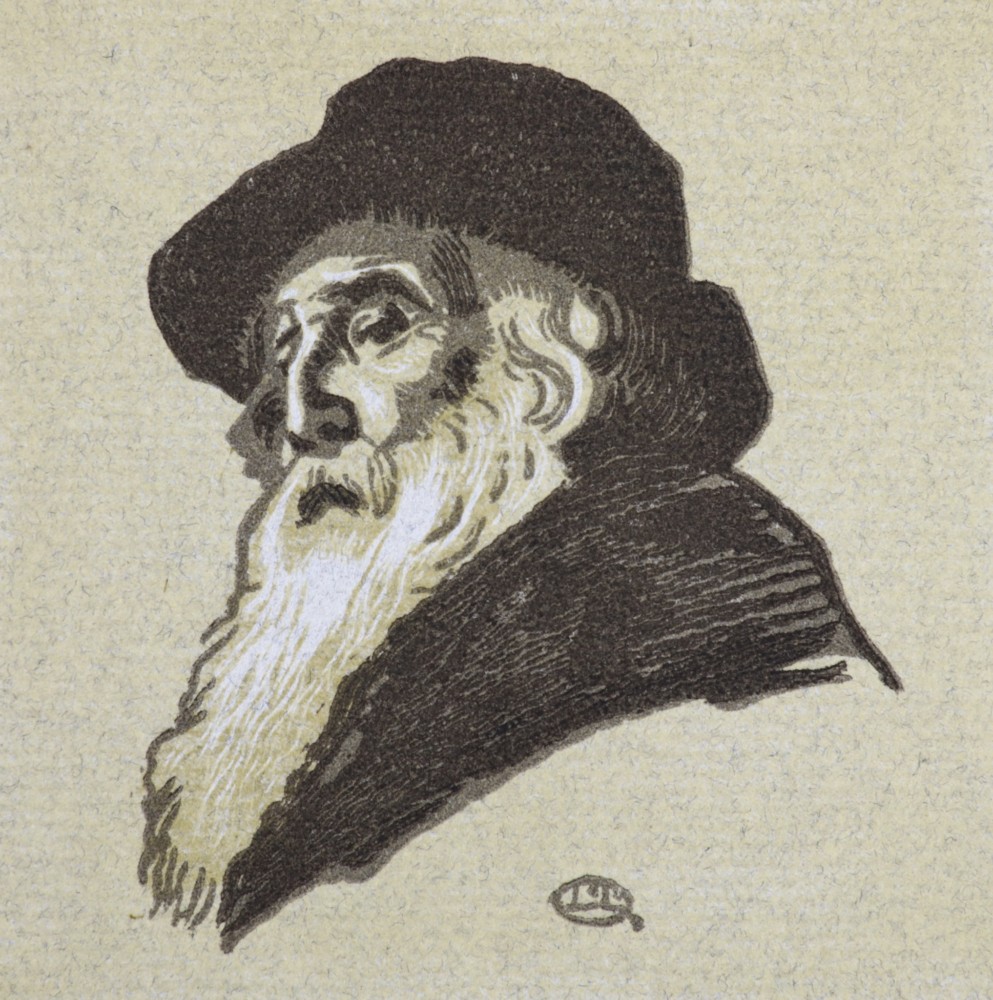 ‘Mr. Pissarro, holding the exceptional position at once of an original talent, and of the pupil of his father, the authoritative depository of a mass of inherited knowledge and experience, has certainly served us as a guide, or, let us say, a dictionary of theory and practice on the road we have elected to travel.’ – Walter Sickert.

Lucien Pissarro was born on 20 February 1863 in Paris, the eldest of seven children of the impressionist painter Camille Pissarro (1830 – 1903) and Julie Vellay (1839 – 1926.) During the 1880’s, Lucien Pissarro worked with painters Paul Signac and Vincent van Gogh. In 1887, Van Gogh dedicated Basket of Apples’ to the artist. In 1890, Pissarro moved to England, which was due in part to his admiration for William Morris and the Arts and Crafts movement.

In 1907, he was invited to join Walter Sickert’s Fitzroy Street Group. In doing so, he was exposed to those artists who would later become the Camden Town Group in 1911. Pissarro’s connections to his father Camille and friends including Georges Seurat, Paul Signac and Vincent van Gogh meant that he embodied a direct link to the origins of Impressionism and Neo-Impressionism for the younger members of the group. 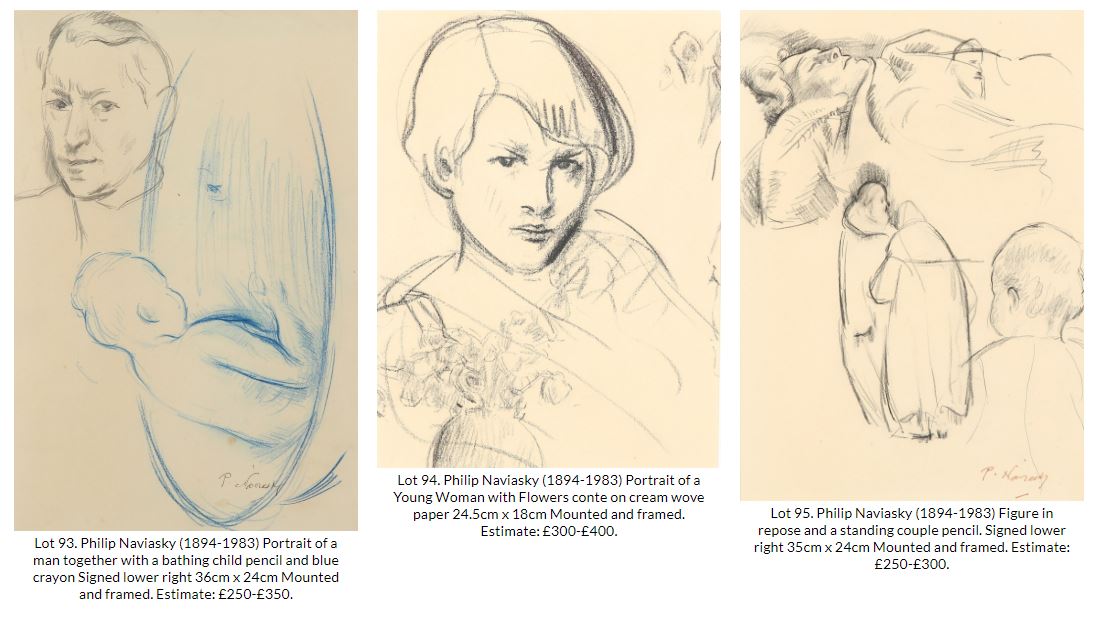 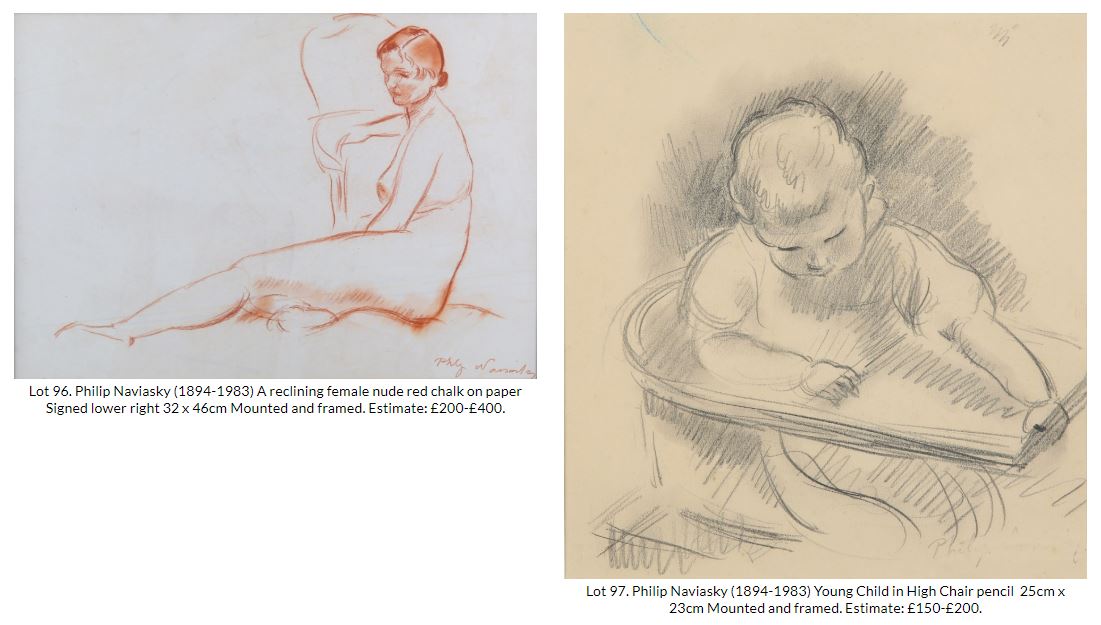 Philip Naviasky was born in 1894 to parents who were Jewish immigrants from Poland. In 1907, he was awarded a scholarship to Leeds School of Fine Arts. Founded in 1903, the Leeds Art Club formed a meeting place for the avant-garde in politics, philosophy, art and literature. Influenced by cultural and theoretical concepts forming in Germany, the club put on ground-breaking exhibitions including the 1913 Post-Impressionist show as well as Cubist and Futurist Art in 1914.