Three clocks by the creator of the world-famous ‘Big Ben’ and Royal clockmaker were auctioned in our European Works of Art and Clocks sale last month. You can view the catalogue or check the sale results.

The clockmaker Edward Dent (1790—1853), who was Royal clockmaker to Her Majesty Queen Victoria and HRH Albert Prince of Wales, won the commission by the Houses of Parliament, to make what was to become the most iconic clock in the world in 1852. Sadly he died while working on the project, and it was subsequently completed by his stepson. Such an important commission derived from his long-held reputation for his skills in creating highly accurate clocks and marine chronometers. In 1841 Dent’s admired ability to make the finest domestic timepieces secured the company a Royal warrant.

Rare chance to own

“This sale offers the rare chance to own a clock by two renowned Royal clock makers. It brings together horological masterpieces produced by the finest craftsmen spanning three centuries, with not one, but three clocks by arguably one of the most important clock makers in the world, Edward Dent.

As well as a rare Vulliamy timepiece that has been in the same family for generations, clocks by Frodsham, Le Roy and other fine French makers such as Linke, Raingo Freres, and Guilmet are also included.” 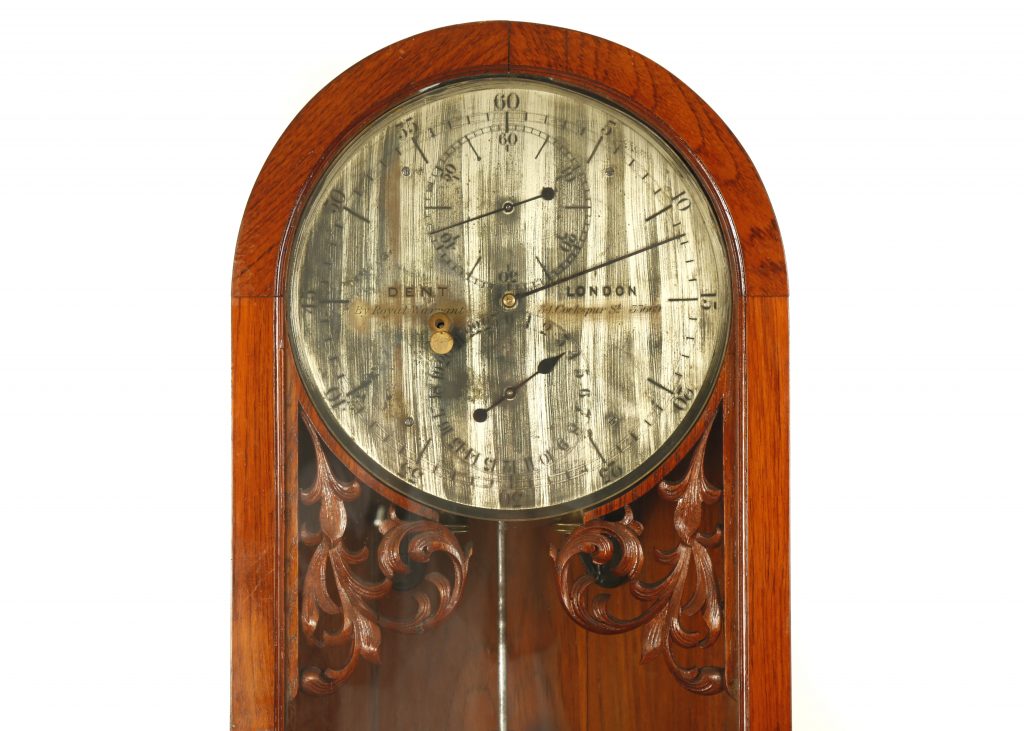 The first of the three clocks by Dent in the sale, is a rare 19th century mahogany astronomical regulator dating from circa 1861-64, which has been in the same family for the last 60 years.

The regulator is an important piece with others as equally important to be found in Museums, such as the Pulkova regulator in the Royal Museum Greenwich.

This particular example has a twenty four hour subsidiary dial, typical of Dent’s astronomical regulators and was produced just a couple of years before he installed ‘Big Ben’. It's in beautiful condition, with its silvered dial signed 'Dent by Royal Warrant 34 Cockspur Street, 33669' and an estimate of £7,000-10,000. 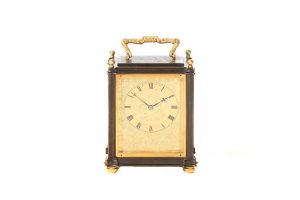 The second clock by Dent is a rare 19th century English gilt and bronze fusee carriage timepiece. Its sides, back and top are beautifully engraved with scrolling foliage, rocailles (shells) and h
o-ho birds.

It also features a Rococo-style swing gilt swing handle and four finials. Its gilt dial has similar decorative engraving and its Roman chapter is signed 'Dent'. It is estimated to fetch £1,500-£2,000. 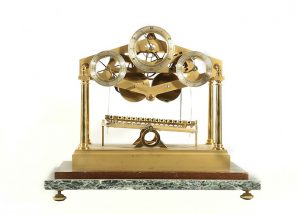 The third is a 20th century brass Congreve clock, designed by Andrew Fell, the first principal of the National College of Horology, founded in 1947. He produced the clock for Dent and Company and it was retailed by Charles Frodsham.

The clock is number 42 of 150 examples and is a reproduction of Sir William Congreve’s original rolling ball clock, which he patented in 1808. 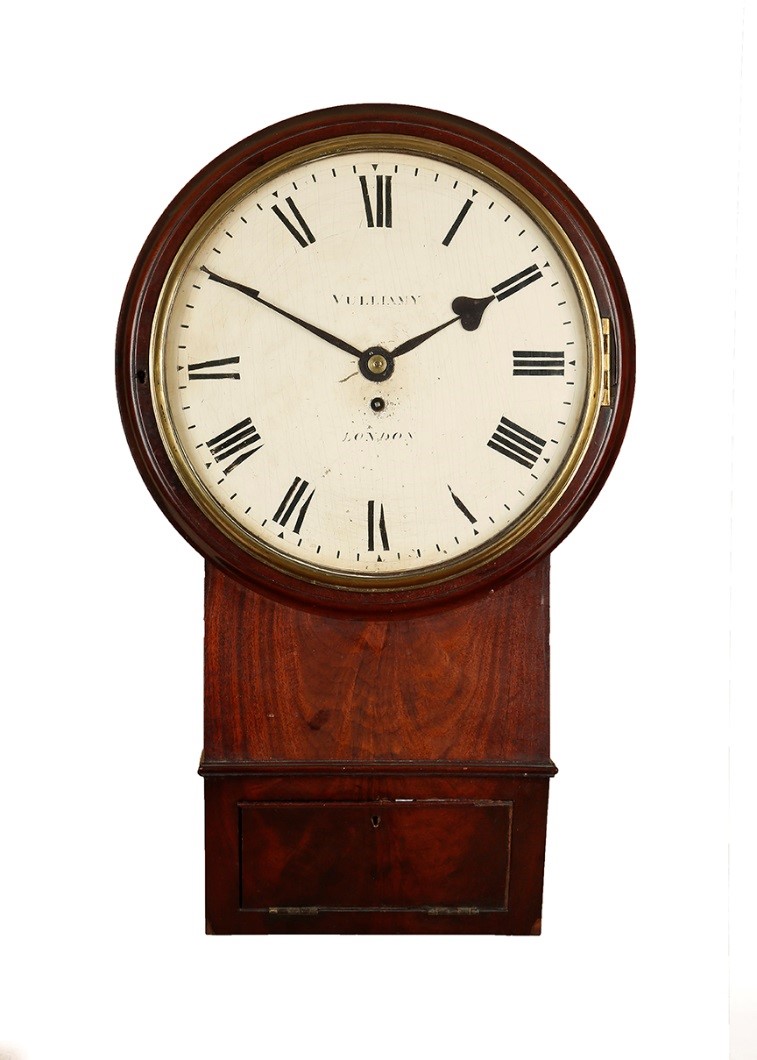 Adding to the importance of the sale is an early 19th century mahogany drop dial wall timepiece by another outstanding Royal clockmaker, Benjamin Lewis Vulliamy (1780-1854), who was active in the 18th and 19th century.

Vulliamy came from a line of exceptional clock makers that enjoyed Royal patronage for three generation. His father, also Benjamin Vulliamy, earned a Royal Appointment in 1773 as King George III's Clockmaker. He was also commissioned to build the Regulator Clock, which was responsible for the official London time until 1884, when the Greenwich Royal Observatory took over this role with the Shepherd Master clock and later in 1893 by Dent no. 2012, mentioned earlier in the release.

Born in 1780, Vulliamy received the Freedom of the Clockmakers' Company in December 1809 and became a liveryman in January 1810 at the age of 30. The present timepiece, estimated to fetch £4,000-£6,000 is typical of the clocks he produced, which were accurate clocks of exceptional quality and workmanship.

These practical and dependable clocks were supplied to the Royal Household, government offices and other important institutions. Vulliamy also produced clocks for several important buildings, including Windsor Castle, University Press, Oxford amongst others, as well as being clockmaker to the crown.

A late 19th century/early 20th century gilt and bronze figural ‘chariot’ clock garniture offered in the sale (pictured above), is by the renowned Parisien ébéniste (cabinet-maker) Fran?ois Linke (1855-1946). Linke was considered to be the finest exponent of Parisian cabinet-making of the ‘Belle Epoque’ style. His pieces are highly decorative and of stunning quality and ingenuity. This particular clock garniture is in the Louis XV style and is modelled as a putto riding an ornate chariot, cast with elaborate scrolls, acanthus leaves, trellis work, floral garlands and a blue enamelled dial with Roman numerals. It carries an estimate of £10,000-15,000. 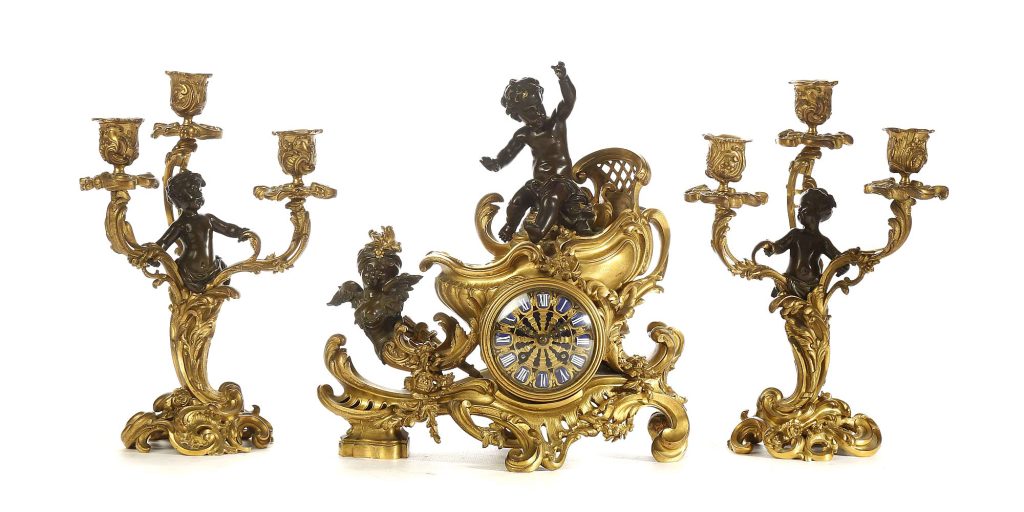