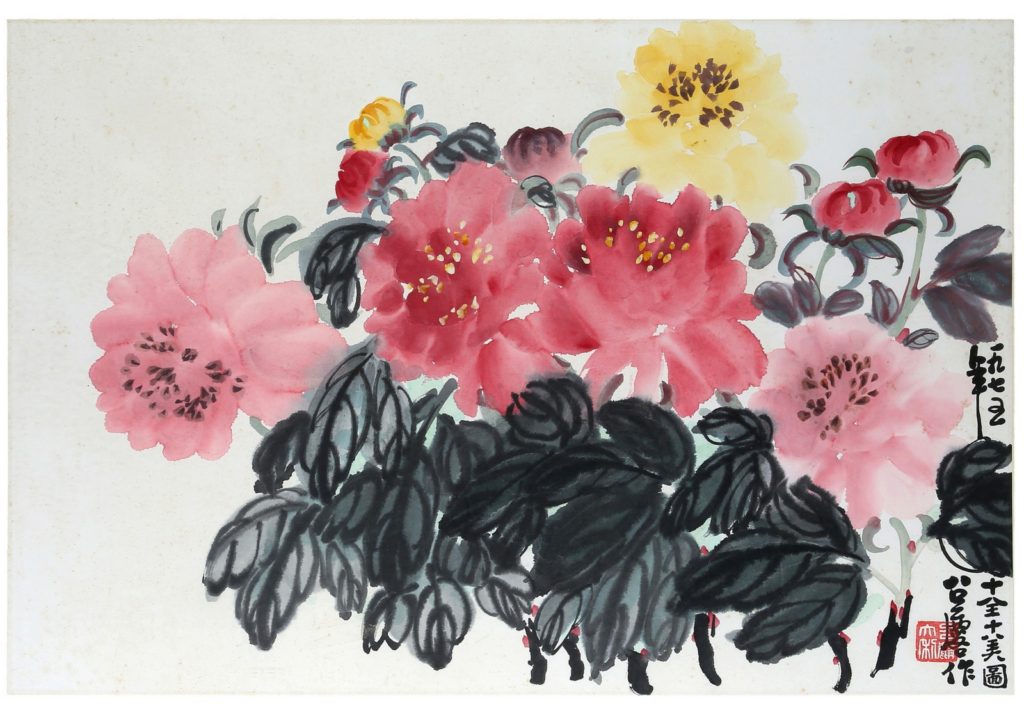 Ahead of the Fine Chinese Paintings auction on 13th November, Head of Asian Art Lazarus Halstead discusses the history of Chinese painting collecting in London through an exploration of ten works offered in the sale.

The collection of Chinese paintings in the UK has always been secondary to other categories such as porcelain. However, the efforts of a small group of dedicated collectors means that exciting paintings do come to light. The forthcoming sale of Fine Chinese Paintings offers works from numerous private collections and provides a fascinating snapshot into the various ways in which Chinese paintings have entered the UK.

There are two main ways in which paintings have made the journey from East to West. The first is that they travelled alongside the emigration or international travel of Chinese artists and collectors. The second is that they were acquired in China by Western travellers to Hong Kong or to China.

During the early 20th Century, there was an explosion of international travel by Chinese artists and literati who travelled in large numbers to Japan in the 1920s and to Europe in the 1930s. 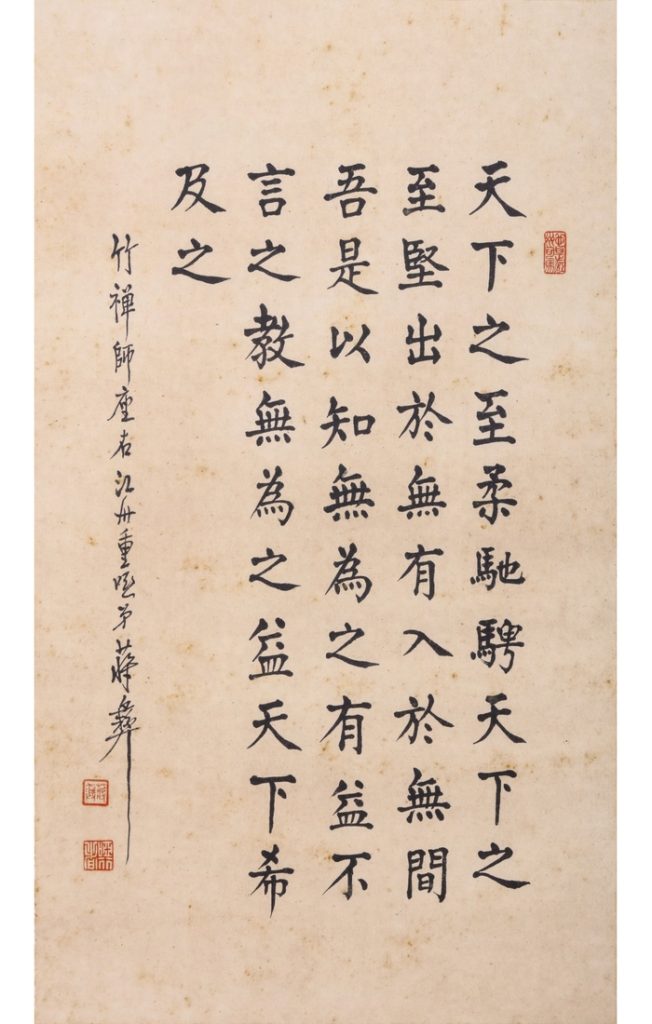 One such figure was Chiang Yee (1903-1977), the Chinese artist, writer and calligrapher who was based in England between 1933 and 1955. Famous for his “Silent traveller” travel guides to the Lake District, Oxford and other locations, Chiang was also the author of the first scholarly study of Chinese calligraphy in English. A calligraphic work by Chiang Yee is lot 35 in the sale [fig 1].

Furthermore, a number of art exhibitions travelled from China to Europe, such as the 1936 International Exhibition of Chinese Art at the Royal Academy. This exhibition included a number of works by contemporary artists. One artist represented was Pu Ru (1896-1963), cousin of the last Emperor of China. His work is well represented in the sale [fig 2]. 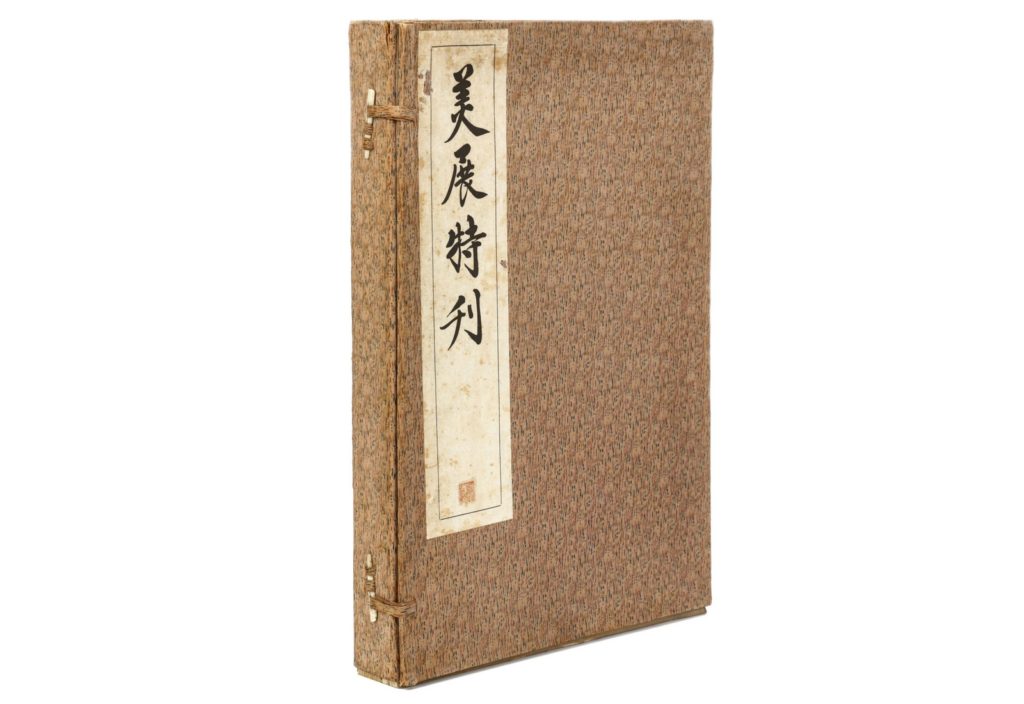 A precursor to the 1936 exhibition took place in 1929 in Shanghai as the first Chinese International Art Exhibition. The exhibition was the first attempt to define Chinese art as a national category and provided a blue print for future international exhibitions. The rare exhibition catalogue (fig 3), divided between categories including classical Chinese paintings, contemporary ink paintings, oil paintings and photography, is offered in the sale.

However, with the wars and political upheavals in China throughout the 20th century, progress in the Arts did not develop in a linear manner and international migration from China reached a peak just before the founding of the People’s Republic of China in 1949.

One such artist who left China in 1949 was Chiang Er-shi (1913-1972). He worked with a New York dealer and gained a somewhat controversial reputation, selling a forgery of a work by Juran to the British Museum in 1961.

His beautifully evocative paintings carry his distinctive style [fig 4], partly shaped under the eye of his teacher Huang Binhong (1865-1955) [fig 5].

Another work which represents the international travel and migration of artists and collectors is a work by the female artist Fang Zhaoling (1914-2006) [fig 6]. She taught at St Anne’s College, Oxford in the 1950s but the work was acquired in Hong Kong by the Chen family who emigrated to the UK in 1948 and visited the artist many times on trips to Hong Kong.

Collectors also emigrated to the West. A 30 metre long handscroll by Xu Naigu (1785 - 1825), shown above, was acquired in Shanghai in 1948 by the father of the present owner. It was then gifted to her on her wedding day in 1974 in Hong Kong, and she later emigrated to the UK.

The work has more than 98 calligraphic inscriptions spanning 127 years by renowned historical figures. Contributors include the Chinese scholar, Weng Tonghe (1830 – 1904), who was appointed as tutor to two consecutive Emperors, and the Chinese journalist and member of the Chinese Nationalist Party, Dai Jitao whose speculated love child was adopted by President Chiag Kai-shek (1887 - 1975.)

The handscroll would have been displayed at literati gatherings where connoisseurs gathered for esoteric artistic and philosophical debates with honoured guests invited to contribute. 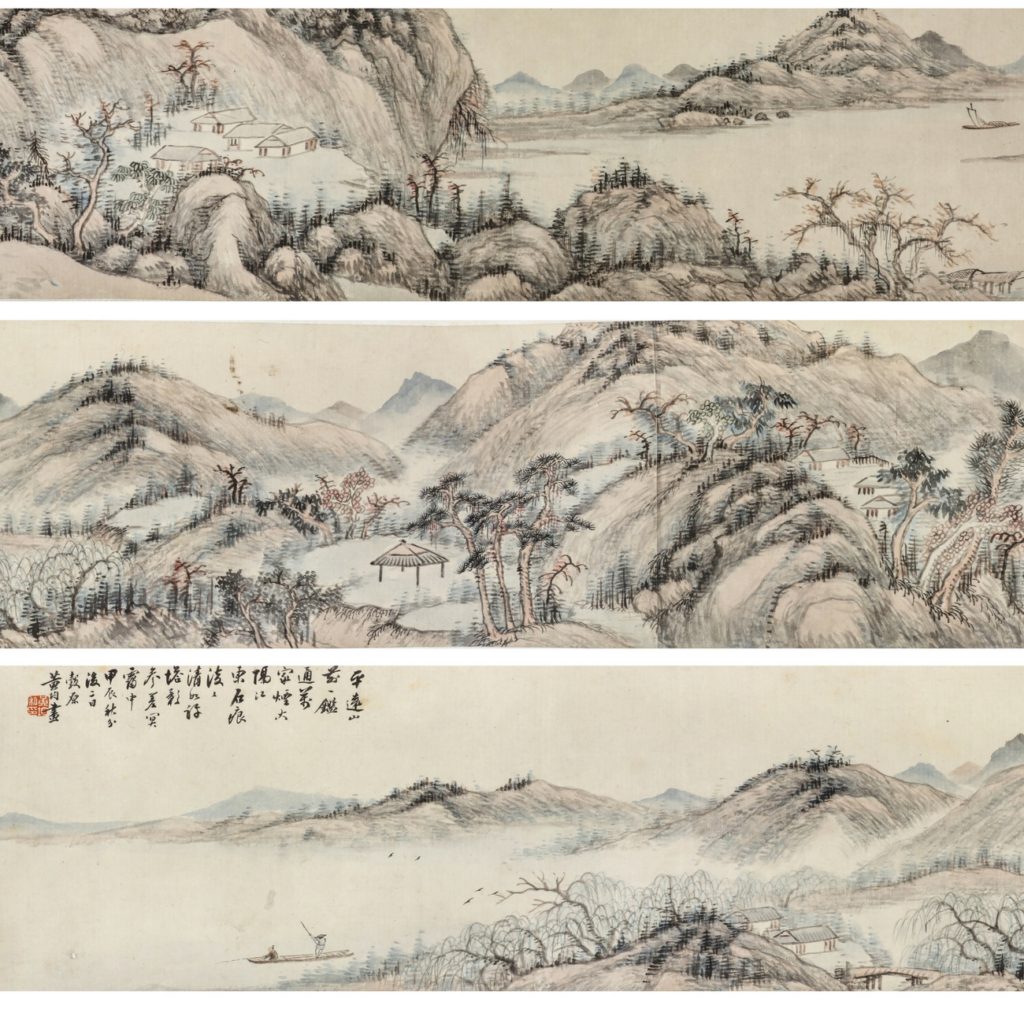 After the founding of the People’s Republic of China in 1949, it was relatively difficult for Westerners to enter China. Thus many of the paintings acquired by Westerners in China in the decades immediately following that were acquired by diplomats stationed in China, who were able to collect, through direct purchase or as gifts, interesting works which they later brought back to the West. Lots 1-5 in the sale are from the collection of a British Diplomat stationed in China and includes a handscroll by Huang Jun (1773-1850) [fig 8]. 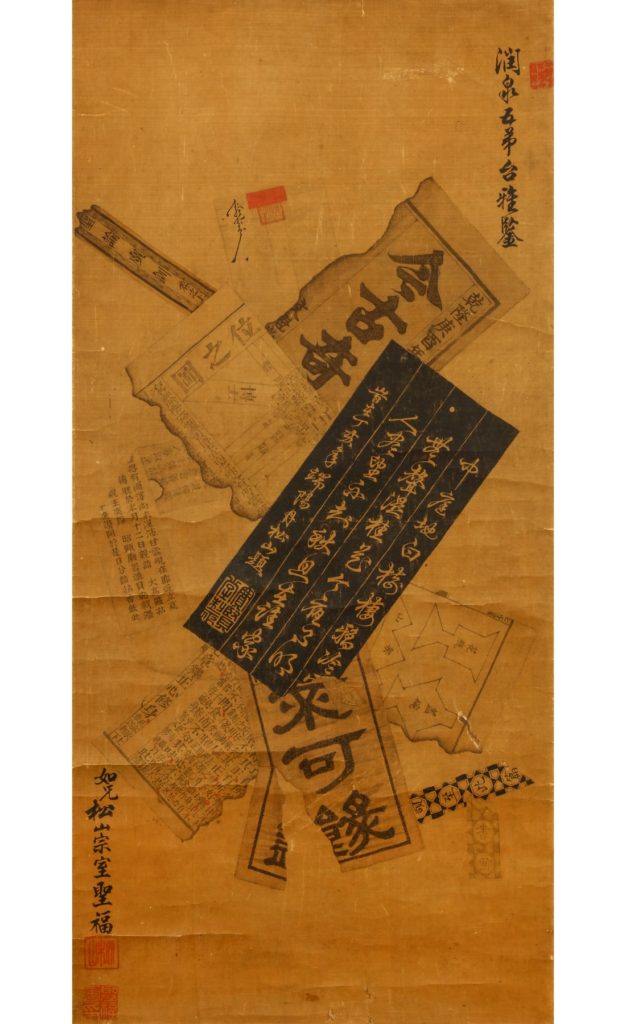 Hong Kong was more accessible to Western visitors than the Chinese mainland and as such has built a status as a centre for the selling and collecting of Chinese paintings. As such, Westerners who visited China would often make purchases from dealers during their visits. One such work is a so-called “Eight Brokens” painting [fig 9]. Such works which involve the painting of layered broken pieces of calligraphy has traditionally been undervalued in China, but has appealed to Western collectors for its intriguing comparison to Western artists such as Kurt Schwitters (1887-1948). The genre has been further popularised by the dedicated exhibition, China’s 8 Brokens: Puzzles of the Treasured Past, that was on show at the Museum of Fine Arts, Boston between 17th June - 29th October 2017.

A work by Tan Changrong [fig 10] is part of a collection acquired by a Danish banker working in Hong Kong in the 1980s. It was acquired from one of the many galleries representing contemporary artists, Wei Wu Gallery, from The Art of Tan Changrong in 1988.

The forthcoming auction of Fine Chinese Paintings represents a new chapter in the collecting history of the paintings that will be offered. As the only dedicated Chinese paintings sale in the UK, this is a unique opportunity for buyers across the globe to develop a deeper understanding of the world’s longest continuous art historical tradition.


If you have a collection of Chinese paintings and would like to discuss your collection or receive a complimentary valuation please contact  Head of Asian Art Lazarus Halstead: lazarus@chiswickauctions.co.uk / 020 3110 0604.

The next valuation day for Chinese Paintings will be held at 127 Fulham Road SW3 6RT on 30 November 2017.