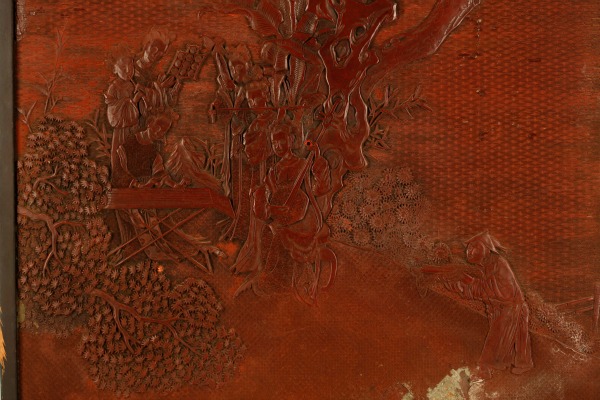 Large-scale narrative lacquer works including panels, screens and furniture produced in workshops within Yangzhou in the first half of the 19th century represent an important but sometimes overlooked part of Chinese lacquer art history.

Foremost among these lacquer artisans was Lu Kuisheng, (given name Dong c. 1775-1850) who is discussed in Moss, In Scholar's Taste, 1983, where four matching panels of by artist are illustrated. It is noted that his workshop produced lacquerware alongside scholarly objects including ink stones and bamboo brush pots but it was in the field of lacquer that their most striking innovations were made.

Sun Guoxin and Sun Zhuchen were likely closely linked to Lu Kuisheng and a comparison of compositional elements of the second panel illustration by Moss demonstrates close visual similarities between their works including the grouping of figures to the left of a diagonally sloping pine tree in an outdoor setting whilst an attendant emerges from the bottom right.

This interconnection is underpinned by the radically new technical and artistic developments these artists ushered in. The depth of carving and the use of contrasting diaper grounds to build up different surfaces is a radical departure from previous lacquering techniques. The expressive quality of the panel is extraordinary for the lacquer medium for combining the subtle nuances of visual composition most often associated with paintings, with the three dimensionality of a carved surface. The group of musicians is thrown into deep perspective by the dense network of leaves in the immediate foreground and the vertically orientated rocks and sparse bamboo stems behind, as well as the overlapping of the figures within the group.
Indeed the panel makes explicit references to the art of painting. The title of the piece, Dong Shan Si Zhu, which may be translated as “Musicians on the Eastern Mountain”, describes a popular theme within the genre of figurative paintings of beauties known as meiren hua where a group of female musicians is depicted within a landscape in contemplation of the politician Xie An. More widely within the genre, paintings of beauties playing musical instruments are relatively common and comparisons can be made with paintings such as “Beauties Playing Musical Instruments in a Garden Setting” illustrated in Beauty Revealed: Images of Women in Qing Dynasty Chinese Painting, 2013, as cat no 18B (pictured below left). The inscription of the present piece, fang xin luo shan ren biyi, makes direct reference to the artist Xin Luo Shan Ren also known as the Yangzhou Eccentric painter Hua Yan (1682-1756) (a portion of a painting of Hua Yan's is reproduced below right).

Decorated with an outdoor scene with a group of six female musicians beneath the shelter of a pine tree that emerges from a large rocky outcrop, with an attendant carrying a qin to the bottom right of the composition, an inscription to the top left of the panel reads Dong Shan Sizhu, followed by the inscription Fang Xin Luo Shan Ren biyi Sun Zhuchen ke, with seals Zhuchen ke (carved by [Sun] Zhu Chen) and Sun Guoxin yin (seal of Sun Guoxin), 114.5 x 78cm.