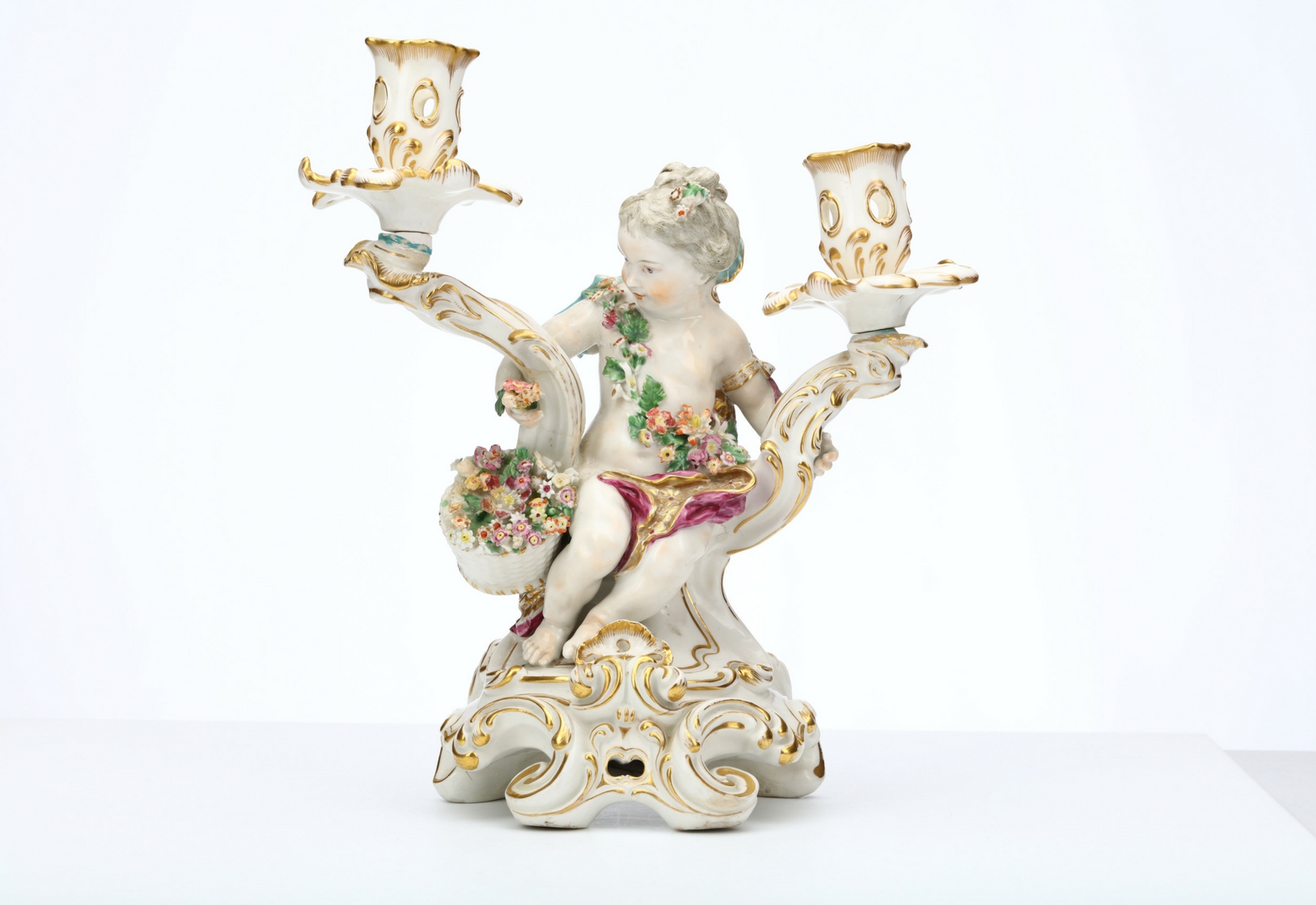 Ahead of the Ceramics and Glass auction on 24 October, Head of Department Dr. Jim Peake takes a closer look at the story behind a rare candelabrum offered in the sale.

Of all 18th century English porcelain, that produced by the Chelsea factory is perhaps the most celebrated. Founded around 1743-45, its earliest products catered for the luxury market. Nicholas Sprimont, the factory’s proprietor, is generally considered to be the artistic guiding force behind the factory’s success. Being a silversmith in Compton Street (Soho) by trade, he often relied upon the influences of silver shapes together with the outputs of Continental factories such as Meissen in the production of his early tablewares. However, the Chelsea factory is perhaps best known for its figures, produced from around 1759, in what is commonly known as the ‘Gold Anchor’ Period.

‘Chelsea porcelain is most easily recognised by its marks, which typically take the form of an anchor. The earliest pieces, which include the famous ‘Goat and Bee’ jugs and Crayfish Salts, are from the so called ‘Triangle Period’ (circa 1743-1749) and typically bear an incised triangle mark.’ – Dr. Jim Peake

The anchor marks were first used from 1749, taking its earliest form as an anchor in relief on an embossed ground in what is commonly known as the ‘Raised Anchor’ Period (1749-1752). This was later followed by anchors painted in enamel colours such as red or puce, or in gold, in what are today known as the ‘Red Anchor’ (1752-1756) and ‘Gold Anchor’ (1756-1769) Periods. Gold Anchor Period wares included a variety of richly gilded and colourful novelties produced in the French Rococo taste, heavily influenced by the outputs of French factories such as Sevres.

‘The products of the Chelsea factory were revered internationally, and imitated by makers including Samson of Paris, and a number of small Staffordshire makers well into the 19th century.’ – Dr. Jim Peake

Sadly by 1769 the Chelsea factory had run into difficulty and was purchased by William Duesbury, the proprietor of the Derby factory, who ran it until 1784. The similarities in the wares produced by both factories are virtually indistinguishable and the period is commonly known as the ‘Chelsea-Derby’ Period. Duesbury continued to use the Gold Anchor mark, but occasionally combined this with the letter ‘D’, presumably for ‘Duesbury’ or ‘Derby’.

‘Perhaps the rarest of all the Chelsea anchor marks is two linked anchors, which probably also represents the twin factories of Chelsea-Derby and was apparently reserved for the finest examples of Chelsea porcelain. One such rare mark appears on a large twin-branch candelabrum in the forthcoming Ceramics and Glass sale, emblematic of ‘Spring’. – Dr. Jim Peake

The original version of the figure offered in the forthcoming auction was probably modelled by Joseph Willems prior to the mid-1760's, which was then adapted for later versions. 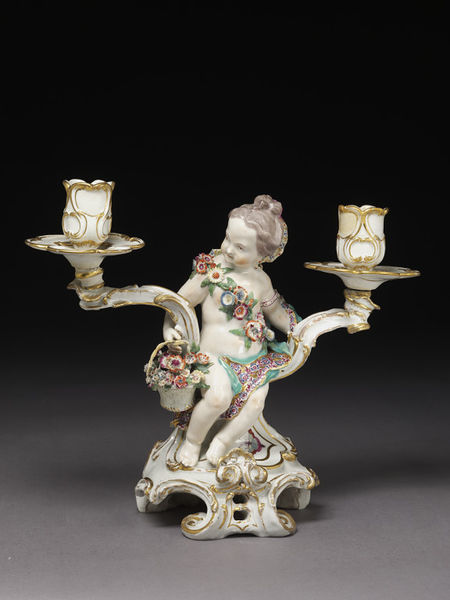 Versions of this figure with the more standard single Gold Anchor mark can be found in the Victoria and Albert Museum, the Museum of London and the Walters Art Museum in Baltimore, making the example set to go under the hammer next month a particularly rare example.