Silvanus deus est silvarum, ‘Silvanus is the god of the forests’ (Servius, Eclog. 10.26.1) 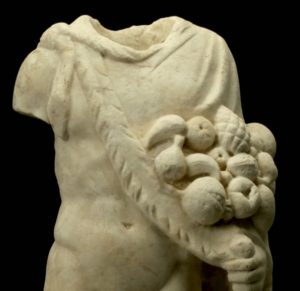 One of the highlights of the next Antiquities sale is a Roman marble torso of the god Silvanus, dating to the 2nd Century A.D.

Silvanus is a woodland deity who protects the forests and countryside, with his name deriving from the Latin word silva, meaning 'wood; forest'. Usually depicted as a bearded, elderly figure, he is even referred to by Horace as ‘father’ (pater, Epodes 2.22) and acts as a protective father-figure, looking after the forest with the wisdom of his old age. Wearing an animal skin and holding fruit and pine cones, his rustic charm harks back to the pastoral mythical Golden Age of Italy, where abundant nature flourished and the fields brimmed with produce without anyone lifting a finger.

“And the ground, without any hard work at all,

Will pour out its new little gifts for you, young boy;

The ivy with the cyclamen, wandering far and wide,

And the beans mixing and mingling with the smiling acanthus.”

This nostalgia for the humbler origins of Rome was important throughout the Empire. First encouraged by Augustus to counter the horror and violence of the Civil War that had abounded for so many years at the end of the Roman Republic, the new Empire was presented as a second Golden Age for Rome. The cult of Silvanus then became particularly popular during the reign of Hadrian, as the deity became associated with Hadrian's favourite, Antinous, especially with his associations with fertility and abundance. Usually famed for his love of everything Greek, Hadrian found a particular place in his reign for this very Roman god.

This piece is a wonderful example of this charming deity, with such fine detail on the animal skin and fruits that he bears. It is a rare delight to be able to pick out each of the items gathered in his cloak individually. This figure has been part of a UK family collection for around fifty years and is looking for a new home for the next fifty.

He has been bringing a little taste of the countryside and woodland into my office in the city. Perhaps he can watch over your own corner of nature, big or small, from a house cactus in a London flat to the fields and forests of the countryside.

For more information on Silvanus, see Doroey, P.F., The Cult of Silvanus: A Study in Roman Folk Religion, Leiden, New York and Köln, 1992.

This lovely figure will be going on sale in the Chiswick Auctions Antiquities and Tribal Art sale on 7 December 2016, with an estimate of £8,000-12,000. Please contact me on abigail@chiswickauctions.co.uk for more information.