Cartoons and Caricatures: the echoes and reflexes of history

Cartoons and Caricatures: the echoes and reflexes of history

Our upcoming  'Books and Illustrated Art, including Cartoons' sale, begins with a group of cartoons and caricatures featuring some of the most popular names in political and social satire. Catalogued by Rhydian Williams, and ranging from single lots by James Gillray and Thomas Rowlandson, through to works from the famous satirists of  1970's and 80's including Martin Rowson, Gerald Scarfe and Ronald Searle, the sale reminds us of the Victor Hugo quote: "What is history? An echo of the past in the future; a reflex from the future on the past." 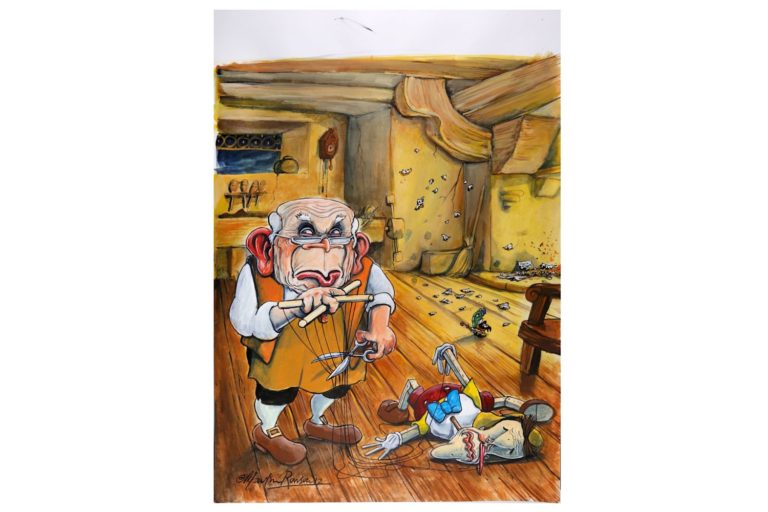 
The quote is particularly evident in Lot 14, a collection of Joseph Lee cartoons reflecting the tumultuous politics of early 1970's Britain which is still echoed today.  'Leadership advice on referendum' highlights the split between 'leave' and 'remain' (or more accurately 'no' and 'yes' in 1975) in Harold Wilson's cabinet over the referendum on membership of the European Community. In 2016, members of the Cabinet were free to campaign on either side of the debate, while the official government position was to vote 'yes'. Then, as now, all three main political parties campaigned for a 'yes' vote, but unlike present times, all of the mainstream media were also on the side of a 'yes' vote. The result was 67% 'yes' and 33% 'no', a viewpoint that of course proceeded to shift over the coming decades. Martin Rowson's cartoon (Lot 30) satirises David Cameron's humiliation at the hands of the then European President Herman Van Rompuy, during a period of budget negotiations with the EU, an event that hardened Eurosceptic feelings among Conservative MPs. 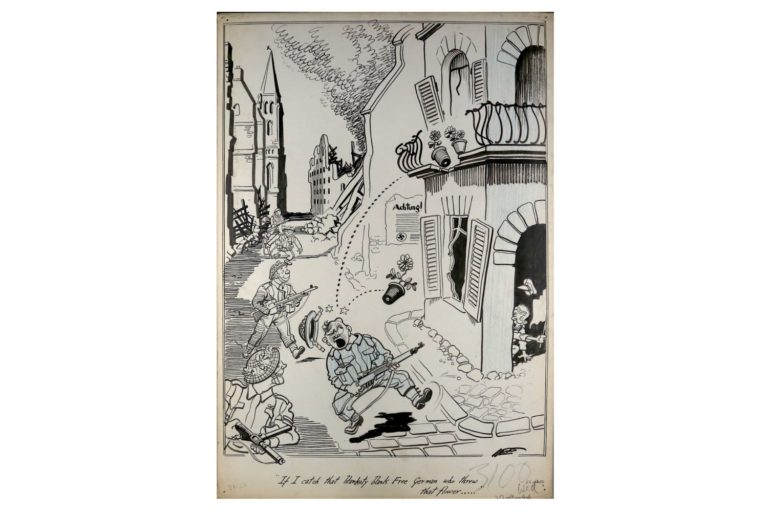 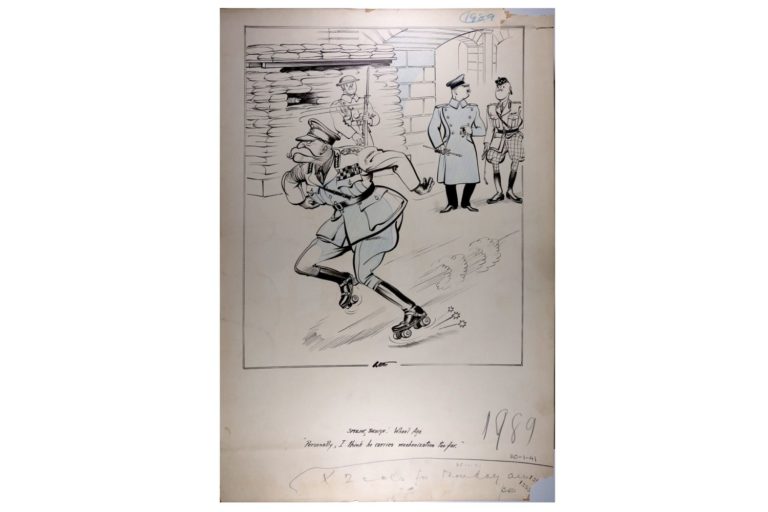 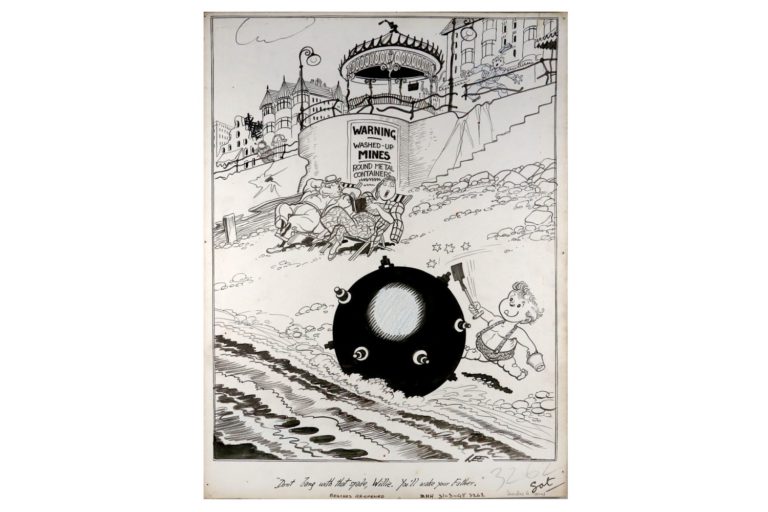 
Some of  Lee's earlier works from the Second World War are collected together in three Lots (11, 12 and 13). Like his famous contemporary, David Low (see Lot 15), Lee opposed the policy of appeasement in the 1930's. His 'Smiling Through' series during the war was very popular with the public, striking as it did a Churchillian chord of the battling British spirit and self-deprecating humour. His cartoons were so in demand that he produced two a day, one for the Evening News and another for the provincial press. 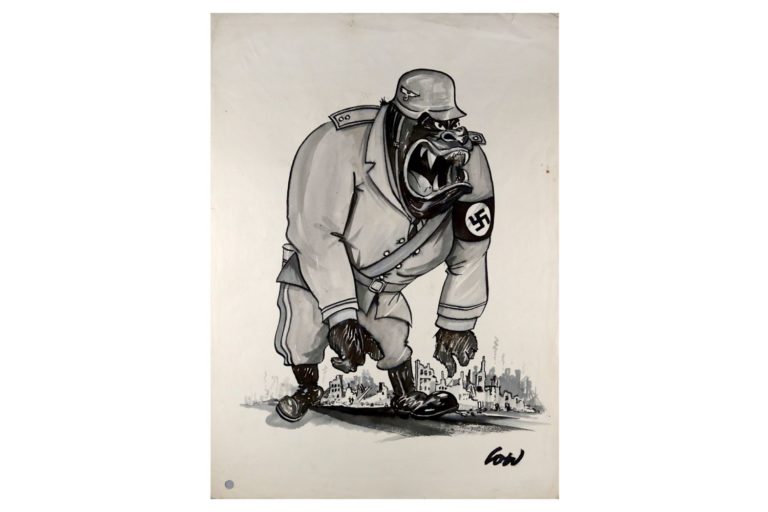 
After the war Lee moved to Wokingham, 40 miles from London. In a total contrast to today's 24/7 instant-news coverage, Lee worked for several hours at home on a cartoon, using the news from that morning's papers. He then sent the completed illustration to the Evening News on the 10.10am train the next day. The editor had to decide whether the cartoon would still be entertaining for readers, as it was yesterday's news! 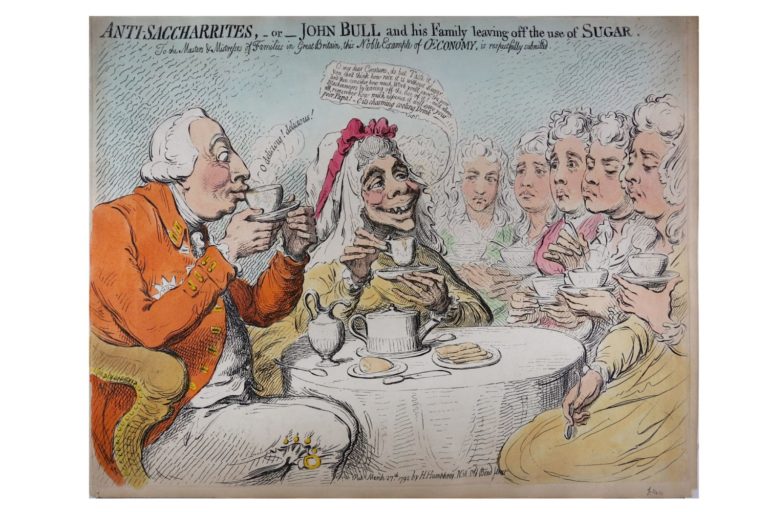 
In another echo of modern times, James Gillray's cartoon (Lot 6) references the power of the consumer boycott.  After Parliament rejected the abolition bill of 1791, abolitionists called for the boycott of Britain's biggest import, slave-produced sugar from the West Indies. As the catalogue notes, the boycott was aimed particularly at women, who could exercise power despite not possessing the franchise. Gillray humorously satirises the upper classes in this cartoon. 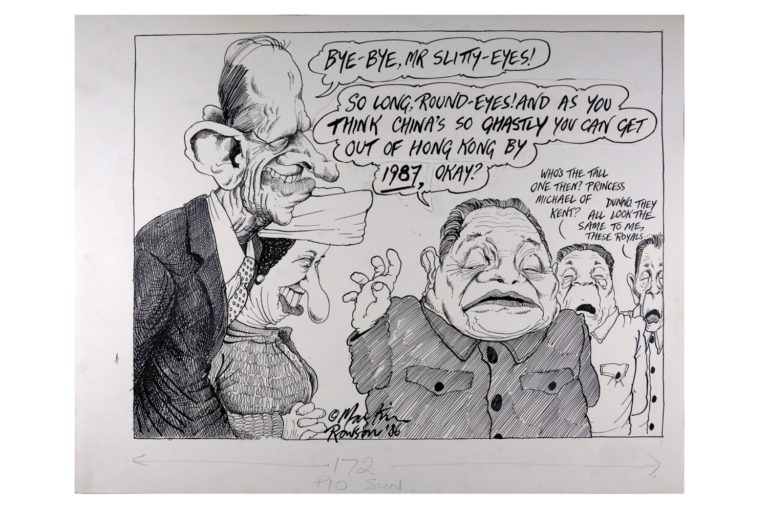 
One of Prince Phillip's most infamous gaffes is referenced in another collection of Martin Rowson cartoons (Lot 25), when the Queen and the Duke made their first state visit to China in 1986. At the time, the gaffe caused international embarrassment, and along with other comments made at the time by the Duke, risked international relations with China.

The sale also features: a collection of Gibbonian literature, Judaica, books from the collection the late Lord John Kerr, and the usual categories of continental literature, English, Modern firsts etc. It will be followed by a sale in May, focusing on Antiquarian and Continental books and prints.