Build your own Modernes Wunderkammer!

Rachael Osborn-Howard, Specialist, and Nick Greenwood, one of our Directors, pick ten lots from our ‘From the Curious to the Extraordinary’ sale on Thursday 6 May 2021 to get you started.

You could tell a lot about an 18th century aesthete from their cabinet of curiosity (‘wonder rooms’ or Wunderkammer). The arrangement of the pieces, the choice of objects and the story behind their acquisition communicate the taste and experiences of the collector. That modern, awkward conversation opener at a party – ‘what’s your story?’ – would have been easily answered with ‘come and see my Wunderkammer’!

Our sale is packed with everything you need to get you started on this journey. But how would you put together a modern Cabinet of Curiosity? What factors determine what you pick? What objects would best tell your story?  Reader, we have done the work for you. We’ve picked ten pieces from our sale. The first five are ‘foundational’ pieces that would have been very much at home in a pre-enlightenment Cabinet. The second five bring your cabinet right into the 21st century.

Cabinets always had a strong element of natural history – plants, bones, stones and fossils. The focus on natural objects meant it was much less expensive to start a collection. In the 17th century, a new breed of middle-ranking collector grew, taking advantage of an expanded world of global trade, exploration and colonisation. A well-stocked cabinet was the key to improving one’s social standing in society, and it said something about your view of the world.

What to pick? Lot 107. an elephant bird egg has the advantage of being from an extinct animal and therefore incredibly rare and in demand, a perfect first piece for your Wunderkammer. We have many relics of extinct birds (for example Lot 11), displays of fossils, seashells, stones, a rock python skin and a sperm whale tool with intricate carvings. Lot 295. a large lapis lazuli free-form specimen is the perfect piece for a person with a spiritual side to their character – lapis lazuli was collected for its healing properties as it was thought to increase self-awareness and self-confidence. Mythical creatures often found their way into cabinets, such as mermaids, as seen in Lot 102. a Fiji mermaid in a display case. We also have a bone from that most famous of extinct creatures, the dodo, hunted to death by Dutch settlers on the island of Mauritius. With less than ten people worldwide who own a dodo bone, it makes it a perfect foundational piece for your Cabinet.

The second staple of any Cabinet is taxidermy. Taxidermy art really took off in the 18th and 19th centuries, with Britain at the forefront of a new breed of taxidermist who developed worldwide reputations. John Hancock’s exhibition of stuffed birds for the Great Exhibition of 1851, most of which he shot himself, created huge public interest. The magnificent Lot 168. white peacock on a stand would have been perfectly at home in Crystal Palace. While taxidermy may have started off as a public education exercise in museums, it quickly became an art form and began to grace Victorian interiors. Anthropomorphic taxidermy became very popular later in the century. We have excellent modern examples in our jazz animals by Andre Robolobavich (see Lots 86 – 90). Our choice for the perfect taxidermy piece is Lot 181. Victorian boxing squirrel in the manner of the originator of this art form, Walter Potter. 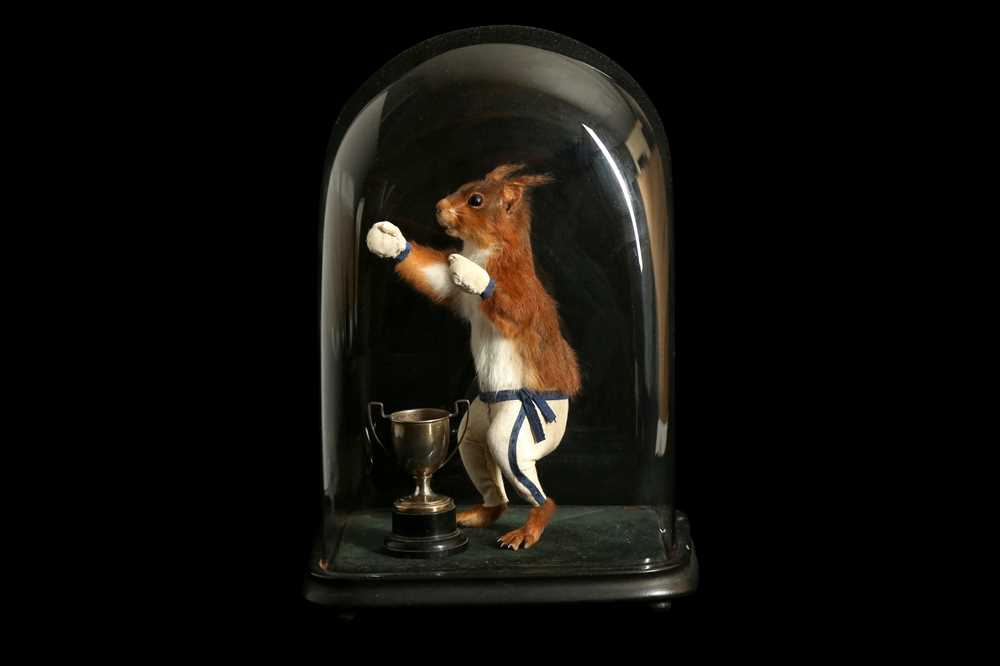 An automaton is basically a self-operating machine, such as a cuckoo clock or one of those naff stuffed fishes that does a little dance when you clap your hands. Automata became very popular in the late Victorian period. And yes, there is something creepy about them as well and that’s why we couldn’t resist including this rare late 19th century automaton, depicting a boy on a swing as a perfect choice for your dream cabinet. 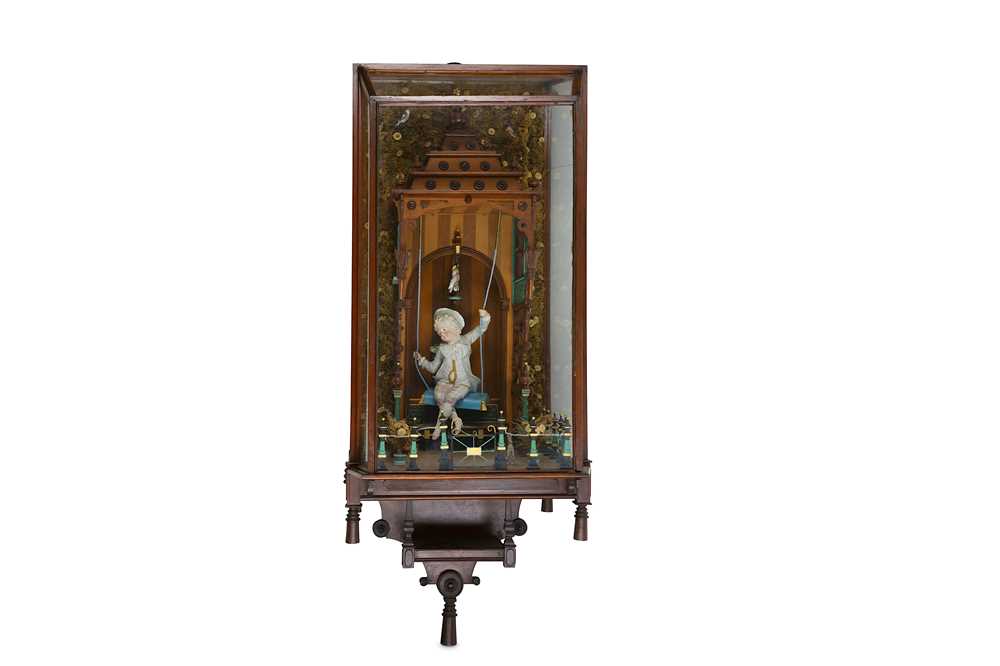 We now choose two pieces that would be very much at home in a Victorian Wunderkammer because of the conversations that they would start. If you have seen the film The Elephant Man starring John Hurt, you may know that his skeleton has been preserved and remains at the Royal London Hospital in Whitechapel in East London, despite Michael Jackson trying to acquire his remains for $1m.

We are lucky enough to have a cast of the skull of the elephant man, Joseph Merrick coming up in our sale. 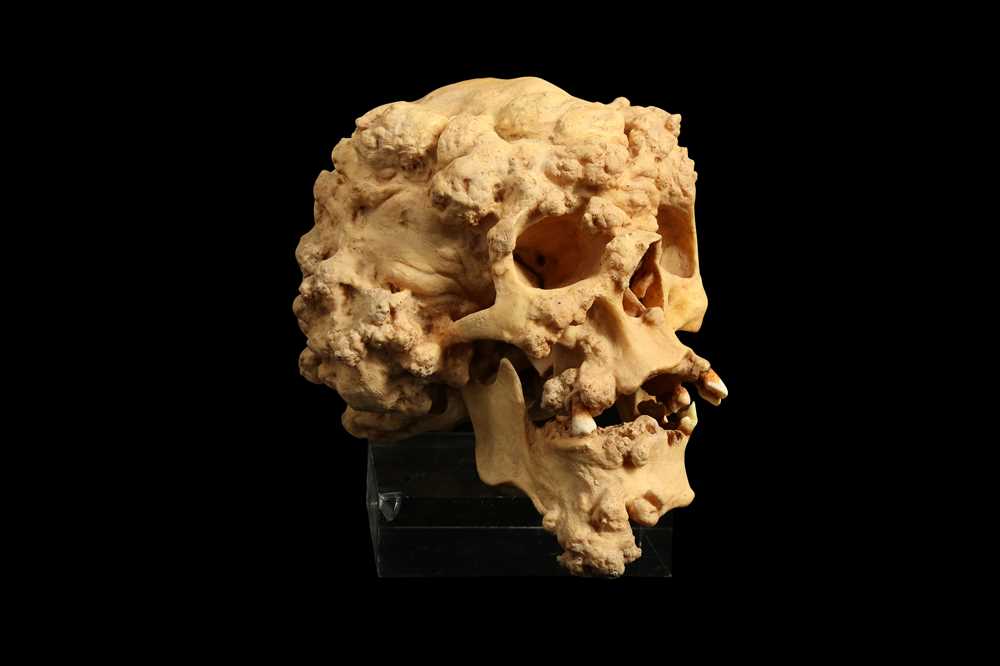 Lot 109. A cast of the skull of the elephant man, Joseph Merrick

Secondly, another conversation opener, where we can show off our knowledge and introduce all sorts of contemporary topics around gender and the treatment of women. This scold’s bridle was probably produced as a curio for Victorian gentlemen, as homage to ‘tales of olde’, popular at the time.

The first selection of our five ‘modern’ pieces has to be this floating zebra by Simon ‘The Stuffa’ Wilson. 'The Stuffa' is arguably the most well known taxidermist in the UK at the moment, having produced the famous ‘Floating Giraffe’ that recently sold in the Aynhoe Park sale for a record breaking £100,000. He also produced the white horse Madrono belonging to Luisa Zissman which recently featured in the press. Simon sources animals that have died from natural causes from zoos and farms and many of his pieces have appeared on screen in television and film in recent years. Look him up on Instagram @simon_the_stuffa 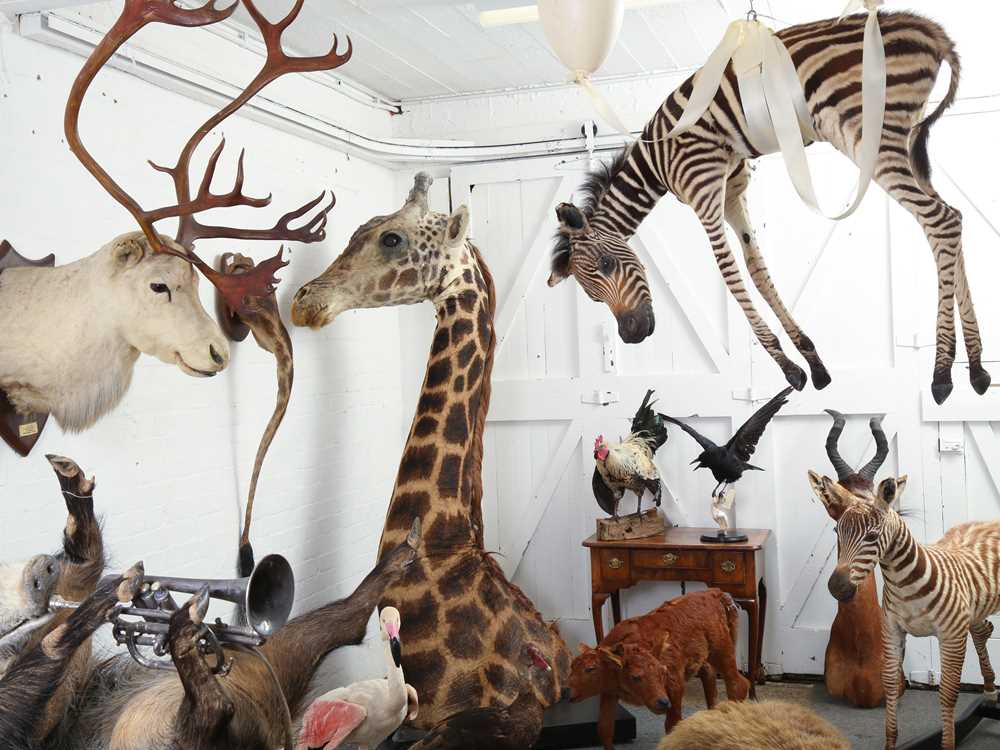 Lot 96. A floating zebra by Simon 'the stuffa' Wilson

This piece also appeals, principally because of its association with the fabulous and amazing Belgian artistic duo Mothmeister. The inspiration for their dark and creepy images comes from their nightmares and imaginings, as well as post-mortem photography, which was a practice of taking photos of deceased loved ones in everyday settings, as a memento. Check out @mothmeister on Instagram. Their photo of this piece comes with the Lot.

Let’s face it – once you’ve seen this creature, you will never get it out of your head! Legend has it that this species is the result of an escaped pet marmoset monkey having its wicked way with a wild stoat in the 1920s. A hundred years on, it is said that several small pocketed populations persist in areas of Epping Forest and the woodlands of Essex, where they frighten small children and amorous lovers! However, numbers are dwindling, as the females find the males too unattractive to mate with…. This is a conversation opener if ever there was one! This mythological creature was created by James Cranfield. Check him out on Instagram @thetaxidermist.

The Viktor Wynd Museum of Curiosities, Fine Art & UnNatural History is a contemporary reinterpretation of a Wunderkammer. It is the creation of artist and writer Viktor Wynd, who has just opened a Falmouth branch of his museum inside the National Maritime Museum. His most recent book 'The UnNatural History Museum' was published by Prestel in 2020. He shares his wonderful world on Instagram @viktor_wynd, where he has kept us entertained during lockdown with poems and fairy tales delivered on his rocking horse.

Maya Angelou’s 1969 autobiography I Know Why The Caged Bird Sings is one of our childhood favourites. But Viktor Wynd has now ruined that coming-of-age story with this disturbing piece of a hanging jackdaw skeleton in a bird cage. Of course, the bird did not die of starvation in the cage, but that is what you can tell people when they view your cabinet!

Can there ever have been a sale in the history of auctions where one could win both a pair of underpants from a contemporary artist and an early pair of Queen Victoria’s knickers? These items have to be in our selection of the best cabinet pieces, perhaps alongside the urinal, Lot 443. In the manner of Marcel Duchamp (French-American, 1887-1968).

From the Curious to the Extraordinary, Thursday 6 May at 12pm. For more information get in touch with Rachael Osborn-Howard.