Ahead of the Asian Art sale taking place on Tuesday 19th February at 11am, Japanese Art Specialist, Yasuko Kido explains the history of kacho-e in Japanese art.

The theme of birds and flowers (kacho-e) has a long history in Japanese painting, it is one of three painting genres, the other two been Landscape and Figures, which derives from the Chinese academic painting classification. However, Japanese artists transformed the courtly Chinese painting tradition into more exquisite, decorative and distinctive 'Japanese' style.

The Middle Ages: Spread of Buddhism and Chinese art 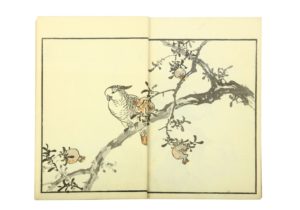 Kacho-e started to appear in Japan during 14th century, when Buddhist monks began making ink drawings with bamboo, plum and lotus combined with birds. These drawings were influenced by the Chinese Sung and Yuan dynasty paintings which were imported into Japan. 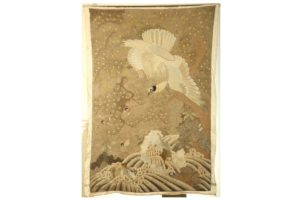 After a long civil war, Japan was unified under the warlord Shogun, who enforced a strict feudal system. The Edo period (16th century) was a time of economic growth and prosperity which resulted in many castles being built to represent power and wealth. These castles were often lavishly decorated by the court artists. Birds and flowers were typical symbols created with a gold leaf ground, a distinctive Japanese aesthetic. 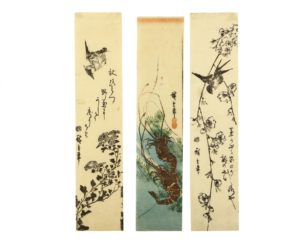 Under the Tokugawa shogunate and isolationist foreign policy, Japan had a limited contact with the outside world for over 220 years (1635- 1853). During this period, traditional Japanese style was revived and refined, helped by the development of colour woodblock printing techniques made famous by Hokusai and Hiroshigne. As a result of these new printing techniques, images of kacho-e were no longer just for nobility and became available to the wider population.

Cultural Revolution and the Golden Age of Decorative art

The Meiji period saw the emperor restored and the military government replaced with the samurai class resulting in a dramatic change in the role of the Japanese artists. The traditional sword smith transformed their profession, producing decorative works of art fit for international art fairs and exhibitions. As a result, the realistic representation of birds and flowers was introduced and popularised in the West.