For the first time, we will be offering a significant selection of antique picture frames in our Old Masters sale on Thursday 22 April. Here, Luke Price (Specialist, Paintings) and Nick Greenwood (one of our Directors) delve into this wonderfully rich world. You will never look at a picture frame in the same way again.

Frames are wonderful. Rarely understood to their full extent, they offer substance and grandeur. We are undergoing a rekindled appreciation of the frame; until relatively recently, few people outside a small circle would consider this invisible surround.  We are delighted to offer 34 antique frames from the 17th to 19th centuries, as part of our Old Master Paintings and Drawings sale. A very good representation from the French school complements frames from Italy and Spain, with some notable Dutch and British pieces alongside. In this story, we pick out some highlights, placing them in their historical context. We also offer an explanation of our cataloguing, to help illustrate the multitude of different styles and ornaments employed across the centuries.

The terms used to describe the shape and ornamentation of picture frames are based on the Latin and Greek terms used to describe classical architecture. Ogees, cavetto edges and incised dentils are equally at home on an antique picture frame as they are on a classical Greek column. And the development of architectural trends and details are also reflected in the development of picture frame styles, as are the strong influences of geography and empire, religion and politics.

Before the 15th century, frames, usually gilded with gold leaf, surrounded huge altarpieces of religious paintings in the great cathedrals and churches of Europe. Frames started to be developed as the great patrons began commissioning their own art. They were needed not only to protect the edges of the paintings but to allow those paintings to be portable between houses and countries. Dutch frames, as shown in lots 166, 167 and 168, tended to be darker, more austere designs of ebony or ebonised wood; given the lack of natural light in a typical Dutch house, this design ensured that what little light there was did not distract from the painting. On the opposite end of the scale, frame makers in Italy and Spain (for example, lots 169, 173) were lavish with the gilding. Each carved in bold relief, and gilded in gold leaf, the gilding served an important purpose - a source of light created to dazzle when illuminated by the light of candles or in natural light. The common use of softwood from the Poplar tree allowed for sumptuous, rich heavy carvings, often associated with the Florentine, Venetian and Bolognese studios.

During the 17/18th centuries, Dutch and Italian framing also conveyed the religious doctrine of the times, with the Italian schools deliberately extravagant, with displays of wealth and grandeur all to the glory of God (and patron). On the other hand, the protestant Dutch schools during the golden age turned to genre paintings with everyday scenes of interiors, and the frames, as described above, a more austere representation of Christianity.

Each frame tells its own story. We guarantee that the next time you look at a picture from the 17th to 19th centuries, you will look at the frame almost as much as you look at the painting itself.

For more information, look at our cataloguing and explanation below. 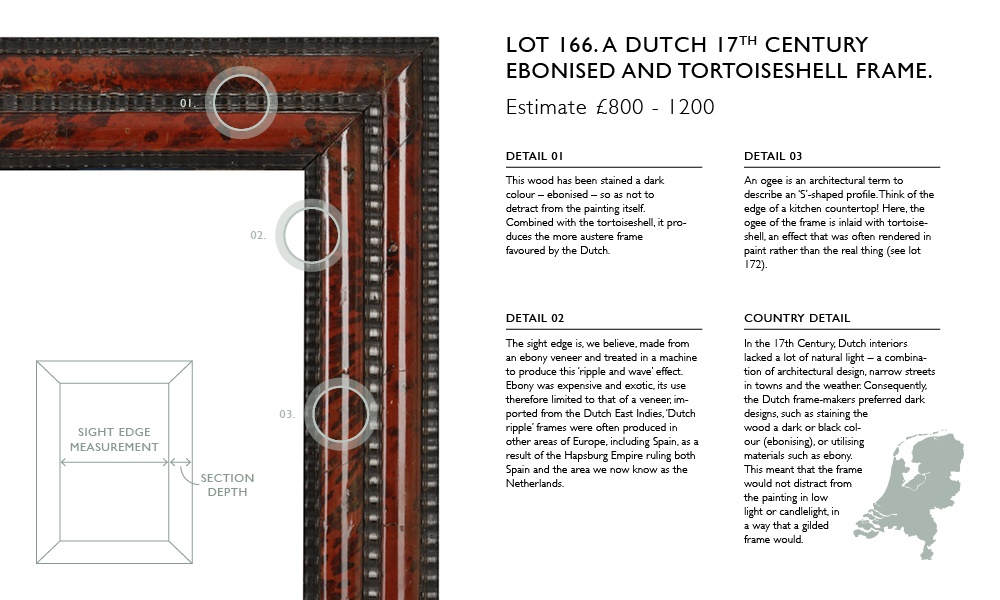 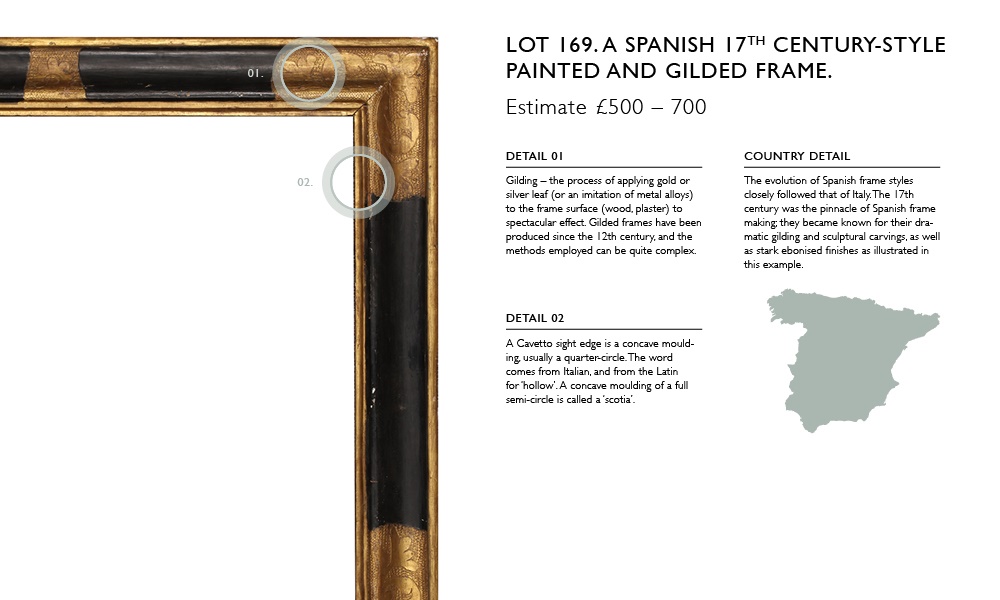 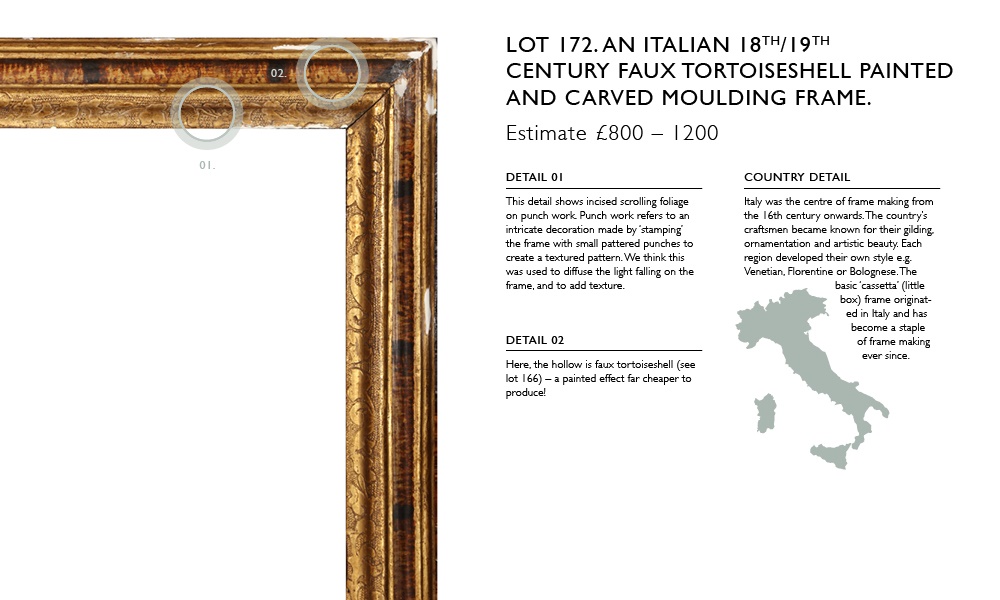 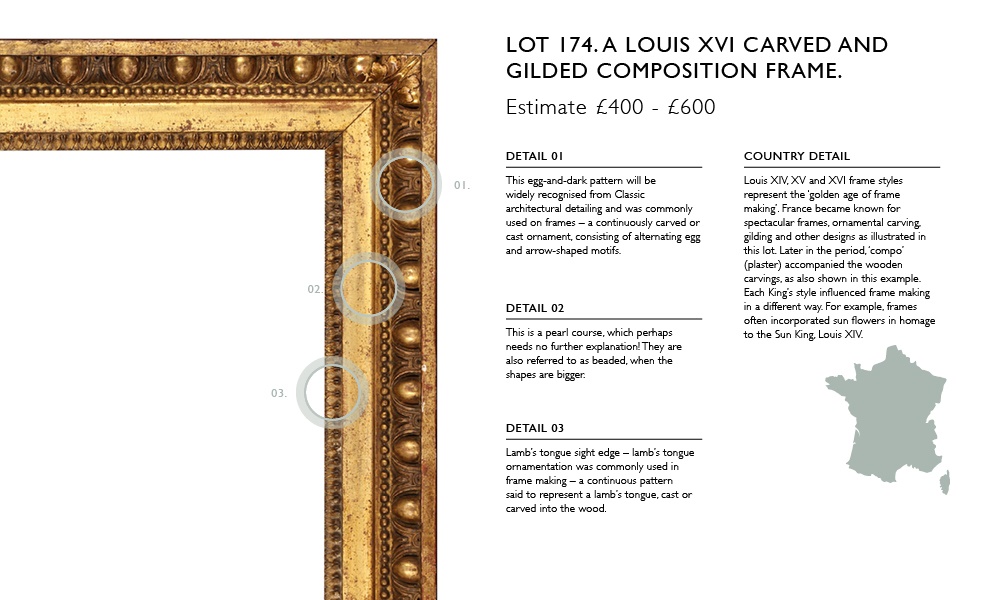 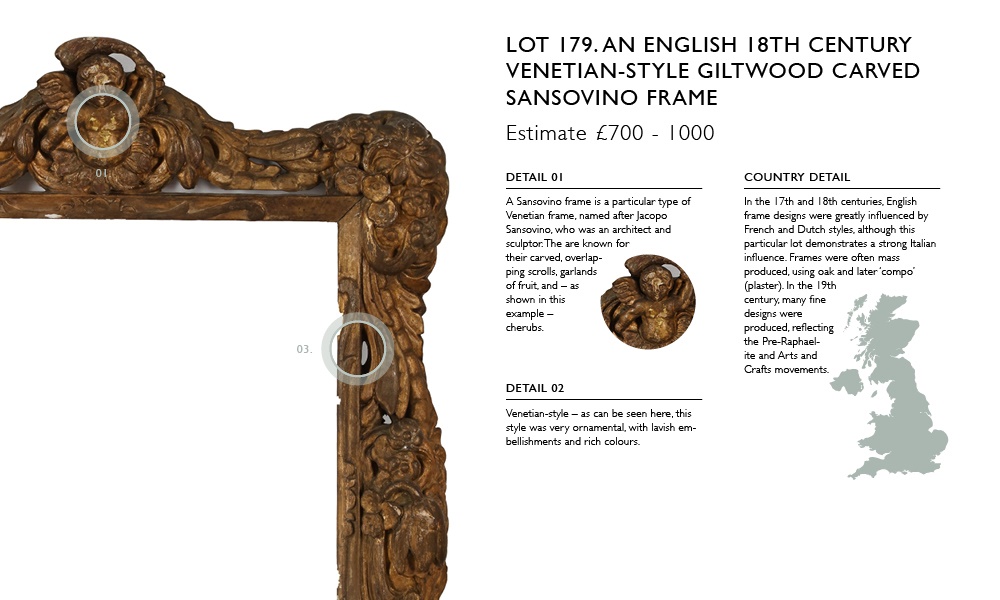 Old Master Paintings and Drawings, with a selection of fine antique frames, will take place on Thursday 22 April at 12pm. For more information contact Head of Sale, Laetitia Masson.