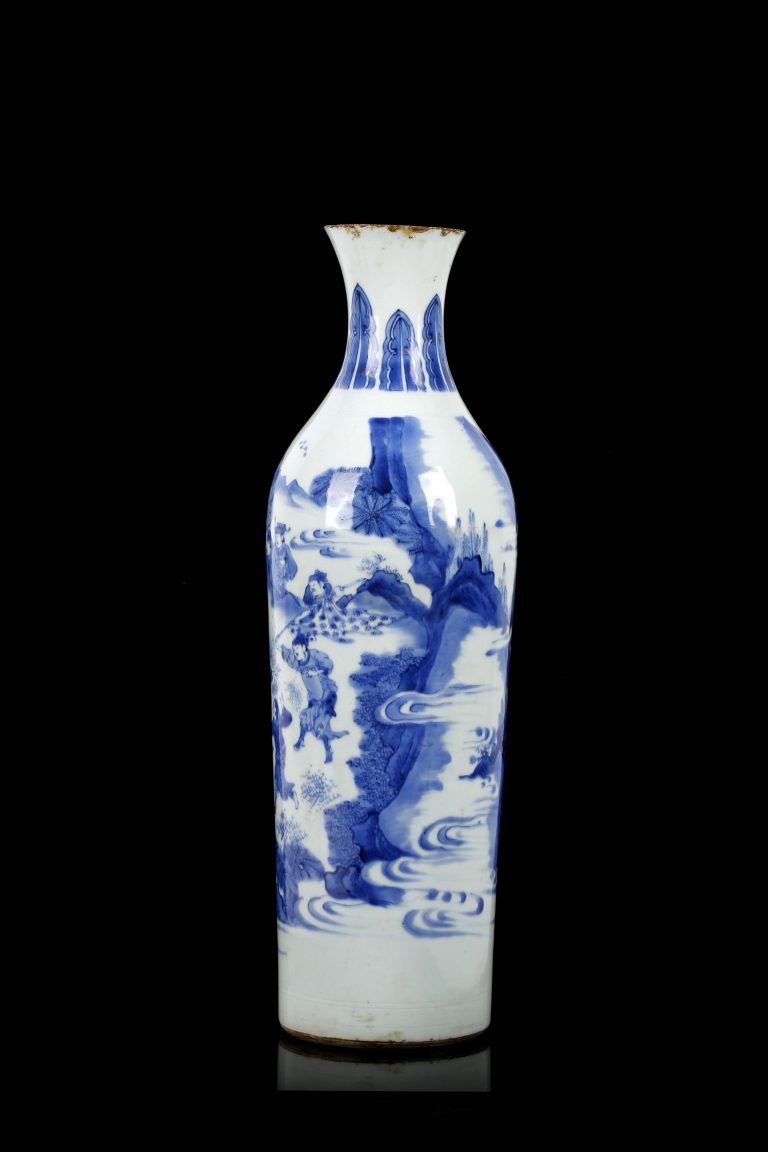 CHISWICK AUCTIONS is delighted to announce that it held its best ever sale on Monday 16th May, 2016 in the history of the company. Their Asian Art sale saw buyers from around the globe bidding fervently across all categories, which resulted in an 75% sold rate and top prices being paid across the board, with many far exceeding their pre-sale estimates.

A Chinese blue and white sleeve vase from the Transitional Period, (transitional meaning between the Ming and Qing Dynasties), came to Chiswick Auctions covered in thick dust and dirt and having been mounted as a lamp (pictured above). A London family had inherited the piece and it had been left forgotten in their home until a clear out, when they had considered throwing it away. It was in fact, underneath the dirt, a beautiful slender cylindrical vase painted with a scene of figures in a landscape and of huge historical importance. Conservatively estimated at £200-£300 it realised £5,040 (including Buyer’s Premium).

Among other blue and white porcelain pieces that performed well from the same period, was a stunning pair of elongated cylindrical Chinese blue and white sleeve vases, painted with garden scenes and featuring officials and their attendants. The tops of the vases are delicately formed as a band of pendent leaves. The pair sold for a huge £26,400 incl Buyer’s Premium.

Lazarus Halstead, Head of Chiswick Auctions Asian Art Department, said: “The sale proves the continued strength of the current market for Chinese, Japanese and South East Asian art. Strong results were achieved across all categories and it was encouraging to see the diversity within the buyers for the sale.”

The Chinese Soapstone carvings section saw just as many good results, with Chiswick Auctions now establishing exceptional prices for this category. Asian Art specialist, Lazarus Halstead, said: “Soapstone carvings have traditionally been the Cinderella of Chinese art; the strong prices achieved in this category reflects the enlightened view of collectors who naturally respond to the virtuoso skill of Fujian master craftsmen of the 17th and 18th Centuries.”

One of the highlights was a Chinese soapstone carving of Pindola with a lion, (above), an exquisitely carved 'tiger-taming luohan' seated with right knee raised and left lowered beneath long flowing robes. The right hand is clasped and held towards the body and the left is slightly raised, holding a fly whisp, with the face detailed in a look of concentration. The lion is seated with its head turned towards his master, its tail coiled above its body, with clothing and fur carved in detail. The colouring through the carving of this piece shows the stone in its full glory, with the face and hands a pale cream colour, the lion a butternut orange and the gown with streaks of blood red. The piece sold for £10,800 incl Buyer’s Premium.

The Buddhist and Japanese sections of the sale also performed well indicating an upturn in the marketplace.  A pair of gilded figures on lions, with stands (pictured above), achieved £10,800 incl Buyer’s Premium and a set of three Japanese pillar paintings by Utamoro realised £2,640 incl Buyer’s Premium.

Another outstanding area of the sale was the photography section. Four rare photographic albums showing a different perspective in each, of the European experiences within China during the first three decades of the 20th Century were estimated to fetch a combined total of between £800-1,200, but sold for almost £16,000 (£15,960), including Buyer’s Premium. Lazarus Halstead, in charge of the sale said: “The popularity of these photography albums reflects the rare and personal insights they provide, into a unique time of transitional between Imperial China and the modern era.”