Artistic Exchanges in the Land of the Ganges

Head of Islamic & Indian Art, Beatrice Campi talks us through the influences between English and Indian art during the 19thcentury

So far, 2020 has not failed to surprise and impress us. This leap year will definitely be remembered for a variety of reasons, including Brexit and the country’s tightest lockdown since WWII. But the beginning of 2020 was not all doom and gloom, especially in the art scene. From ‘Tutankhamun: Treasures of the Golden Pharaoh’ at the Saatchi Gallery, to ‘Kimono: Kyoto to Catwalk’ at the V&A, the London art exhibitions compass clearly seems to have been pointing eastward.

Among the Eastern-focused exhibitions our buzzing city had to offer before the Working From Home era, one, in particular, deserves a mention - the Wallace Collection, ‘Forgotten Masters: Indian Painting for the East India Company’. This star-rated and well-attended show, in the heart of Mayfair, was curated by William Dalrymple, a pluri-awarded contemporary writer, highly-connected socialite, charming Indian art collector and historian with over 25k Instagram followers. The exhibition showcases gouaches and drawings produced by Indian masters for English patrons in the late 18th and 19th centuries, a time when encounters and relationships between England and India became increasingly frequent and, shall we say, often promiscuous.

East India Company paintings, also known as Company school, used to be fairly sought-after in the nineties and early two-thousands, but lately the art market had turned its favour towards more indigenous Indian productions, such as paintings from the Pahari schools (e.g Kangra, Chamba, Basohli) and Mughal ateliers. So how come the Company school paintings are now back in vogue?

Firstly, from a purely aesthetic perspective, their style and techniques are very much rooted in the tradition of Western paintings and watercolours. Indeed, Indian artists painting for English patrons often took lithographed Western botanical studies or still-lives as their models and used watercolour techniques on English watercolour paper (often from the Kent-based papermaker K. Whatman). However, by choosing subjects from the local architecture, fauna and flora and by adopting meticulous Mughal elements, these painters created an extraordinary fusion of English and Mughal elements, writing a new chapter in the history of Indian painting (W. Dalrymple, Forgotten Masters: Indian Painting for the East India Company, exhibition catalogue, 2019, p.15).

This unique artistic fusion produced some exquisite pictorial masterpieces, such as the Impey, the Buchanan and the Fraser Albums, and is clearly the fil rouge of several of the ornithological and botanical paintings which are to go under the hammer in our next Islamic & Indian Art sale on Wednesday 22 April (lots 324 - 327). They all showcase the use of very thin brushes to naturalistically replicate bird feathers, animal hairs, and natural veneering of flowers, with gem-like highlights and brilliant colours to create life-like depiction. Their plain backgrounds were inspired by 18th and 19th-century European natural history prints that went against the Mughal pictorial tradition, which assumed the backgrounds normally depicted landscapes or interior settings.

Lot 326. Four studies of birds in their natural habitat

It shouldn’t surprise us that these paintings were so well-received and even welcomed by a Western audience. Company school paintings combined a minute attention to detail, with elements of both naturalism and exoticism - a winning trio in both Georgian and Victorian times. These paintings would please the eye with their symmetry and well-balanced compositions, whilst stirring interest and curiosity due to their foreign subjects. Their artistic vocabulary stood the test of time and these paintings are now back in fashion, ready to mesmerise a modern-day audience.

In our upcoming sale, we are offering examples of Company School paintings which have elements of intrigue beyond their brushwork.

For instance, lot 325 is particularly interesting as it presents a slavish and faithful depiction of the renowned Cheetah in the Calcutta Impey Album, painted by the master Shaikh Zain Ud-Din. Commissioned by Sir Elijah (1732 - 1809) and Mary Impey in 1777 and 1783, the Impey Album was a series of 326 natural history studies. Scholar Andrew Topsfield described the album as “a great undertaking, both of amateur scientific ambition and inspired artistic vision” (ibidem, p.40).

Lot 325. A study of a cheetah after the Impey album

The subject of our lot is truly Indian in choice. Cheetahs were revered pets at the courts of Mughal emperors and special companions during hunting trips. The naturalistic rendering, however, departs from Indian pictorial traditions and is so precise that is almost allows the beholder to count the hairs on the cheetah’s body; to enumerate the claws clenched into the ground; and to almost feel its panting. In this painting, shading and nuances in the fur are created using purple ink, a colour which was not included in the Indian palette until the late 19th century. Despite this difference, the overall composition is clearly in tune with Shaikh Zain Ud-Din’s album page and with East India Company painting principles.

Another watercolour in our sale worthy of mention is the Indian Barn Owl (lot 324). We won’t dwell here on the finesse of its draughtsmanship, the wise nuancing of the opaque pigments on the paper, or its overall realistic technique. What’s intriguing about this lot is the paper on which it was drawn. Indeed, by putting this drawing in front of the light, one can readily decipher the watermark of the French papermaker I VILLEDARY. This watermark, used for a period of over 150 years, was first created in France and carried on its use when the production moved to the mills of Hattem, in the Netherlands. It is plausible that this paper reached the shores of India during the time Bengal was a Dutch colony, showing once again how the artistic exchanges between 19th century Europe and India did not limit themselves to techniques and styles, but were also interwoven with commercial ambitions and diplomatic affairs. 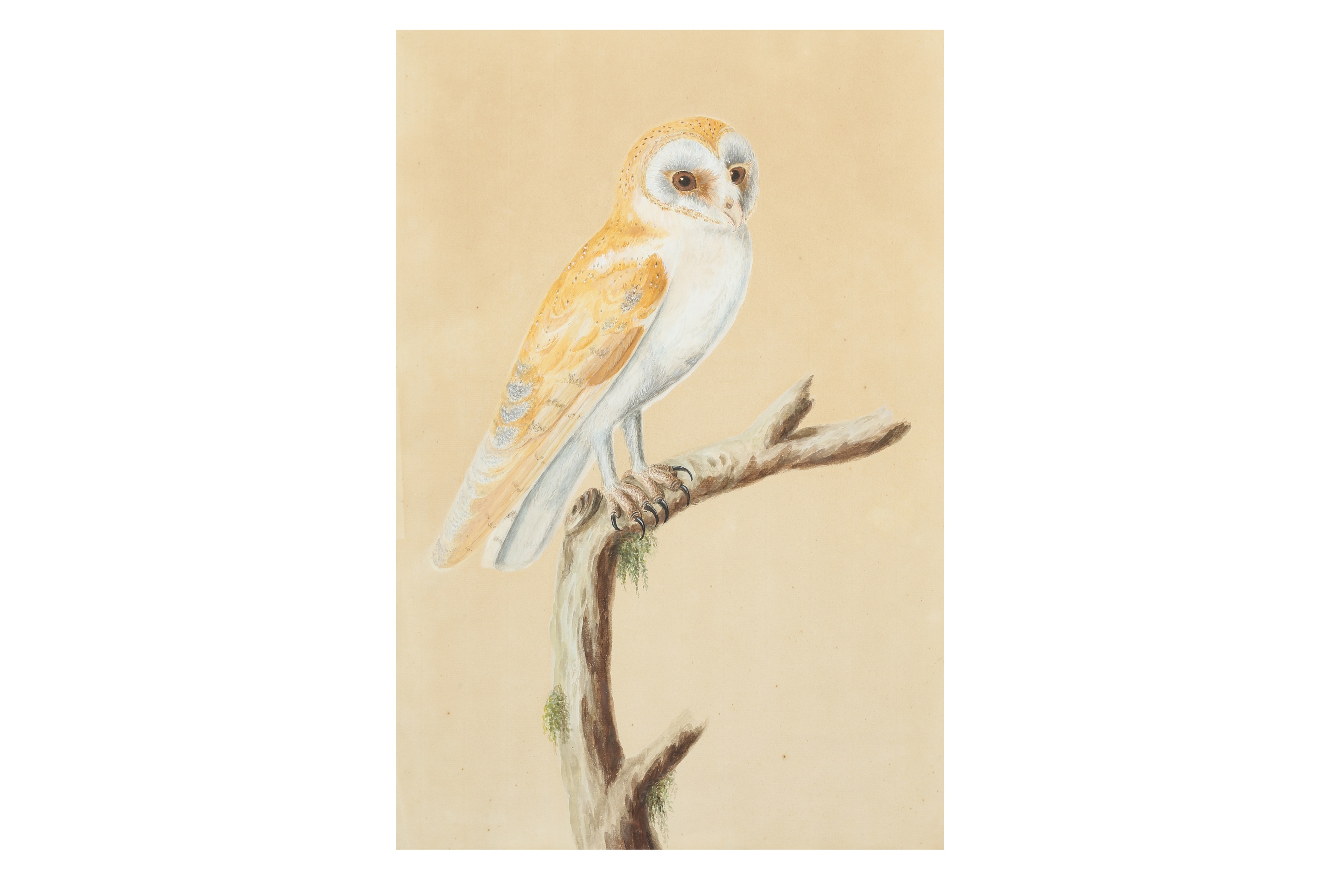 And by following the ‘paper trail’, we come to the last lot I want to highlight in this blog, the Telugu petition letter of Addepalli Ramaswami addressed to the House of Lords (lot 316). This extremely interesting letter, purchased by our vendor from the Chicago Newberry Library in 1995, presents two sections: the first part is in English and it is addressed to the Right Honorable the Lords Spiritual and Temporal in Parliament Assembled in London, on laid paper watermarked with the East India Company bale mark (VEIC, United East India Company) in its 18th-century format; the latter part is written in Telugu, described in a later annotation in pencil at the bottom of the page a Gentoo language spoken in South India (i.e. a Dravidian language), on laid paper watermarked J Whatman 1809.

The content of this document, a rare and interesting survival of Anglo-Indian diplomatic interactions before the Mutiny in 1857 and the establishment of the British Raj (1858 – 1947), is in my view even more intriguing than the paper on which it’s written.

The Telugu text translates as a plea for help by Addepalli Ramaswami to the House of Lords, claiming that the immigrants from Hyderabad, likely to be of Muslim faith, were causing great sufferings to the Kapu caste, a social grouping of agriculturists and cultivators local to the region of Andhra Pradesh. Clashes between the two groups were settled in the past by the local kings. Mr. Ramaswami thus begs the House of Lords to take on the role of the ancient rulers and to assist the autochthonous caste restoring the peace over their lands. 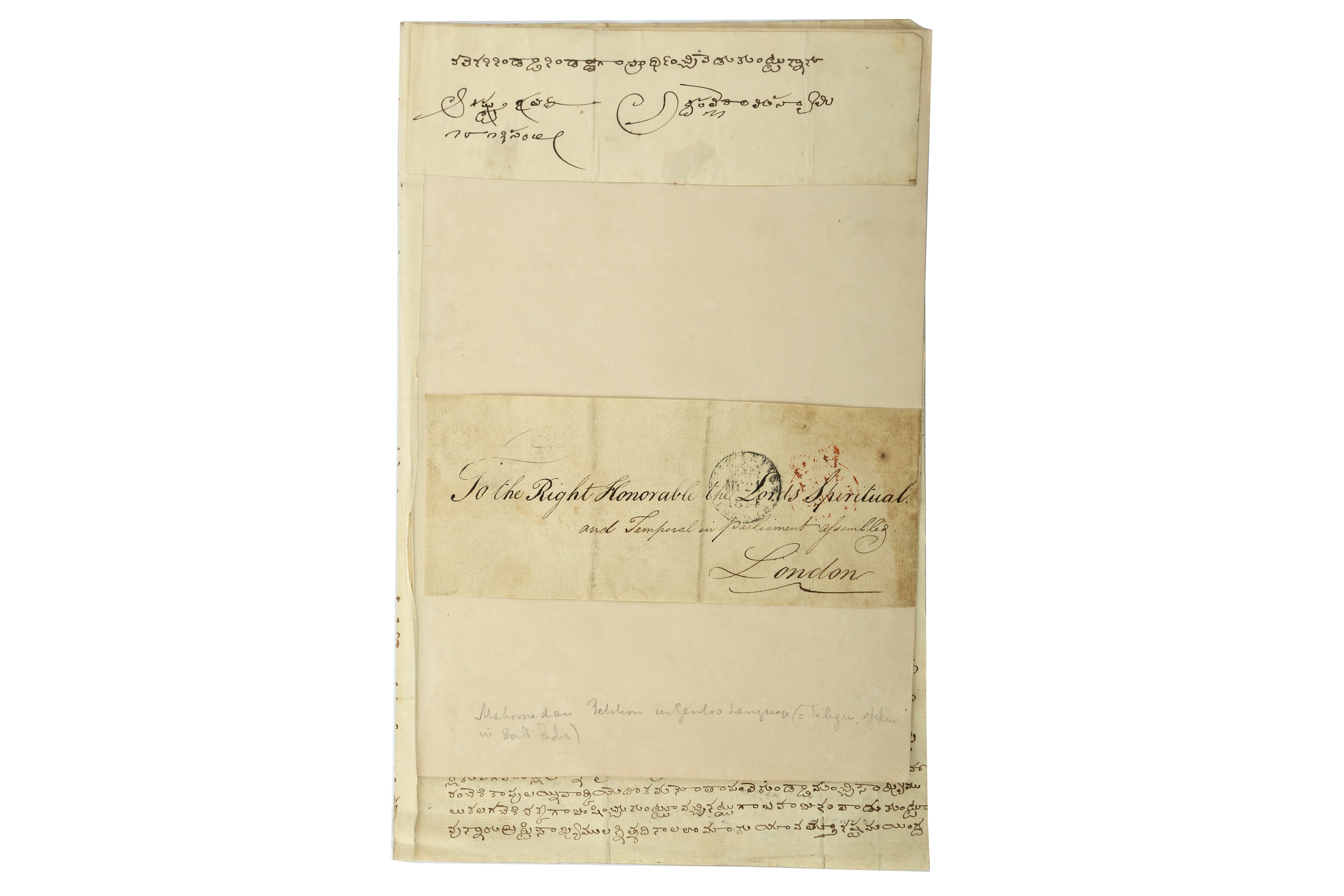 The plea is accompanied by a covering letter (in English) in which the House of Lords is requested to translate the document literally and accurately and to add a seal of official translation in the case that “tricks should be otherwise played”. This request, seemingly scornful, highlights how diplomatic interactions before the Mutiny expressed tensions not seen in the ripe artistic exchanges previously discussed, demonstrating once again the crucial role played by art in multi-cultural and inter-faith conversations.

For more information on any of the pieces referenced in our blog, contact Head of Islamic & Indian Art Beatrice Campi