“What is Art? It is the response of man’s creative soul to the call of the real.” --- Rabindranath Tagore

Head of Islamic & Indian Art, Beatrice Campi and Department Coordinator, Ghislaine Howard are thrilled to offer the private collection of Islamic & Indian Paintings from Anthony Dexter.  Dexter is an English Private Collector of Oriental arts and successful interior designer who has been a prolific collector for the last thirty years.  This collection celebrates the mesmerising variety of the pictorial arts of India across a variety of regions, centuries, and medias. Beatrice and Ghislaine have selected three of their favourite lots from the sale to take you on a journey of discovery and divertissement through mythological tales, epic adventures and amorous encounters. 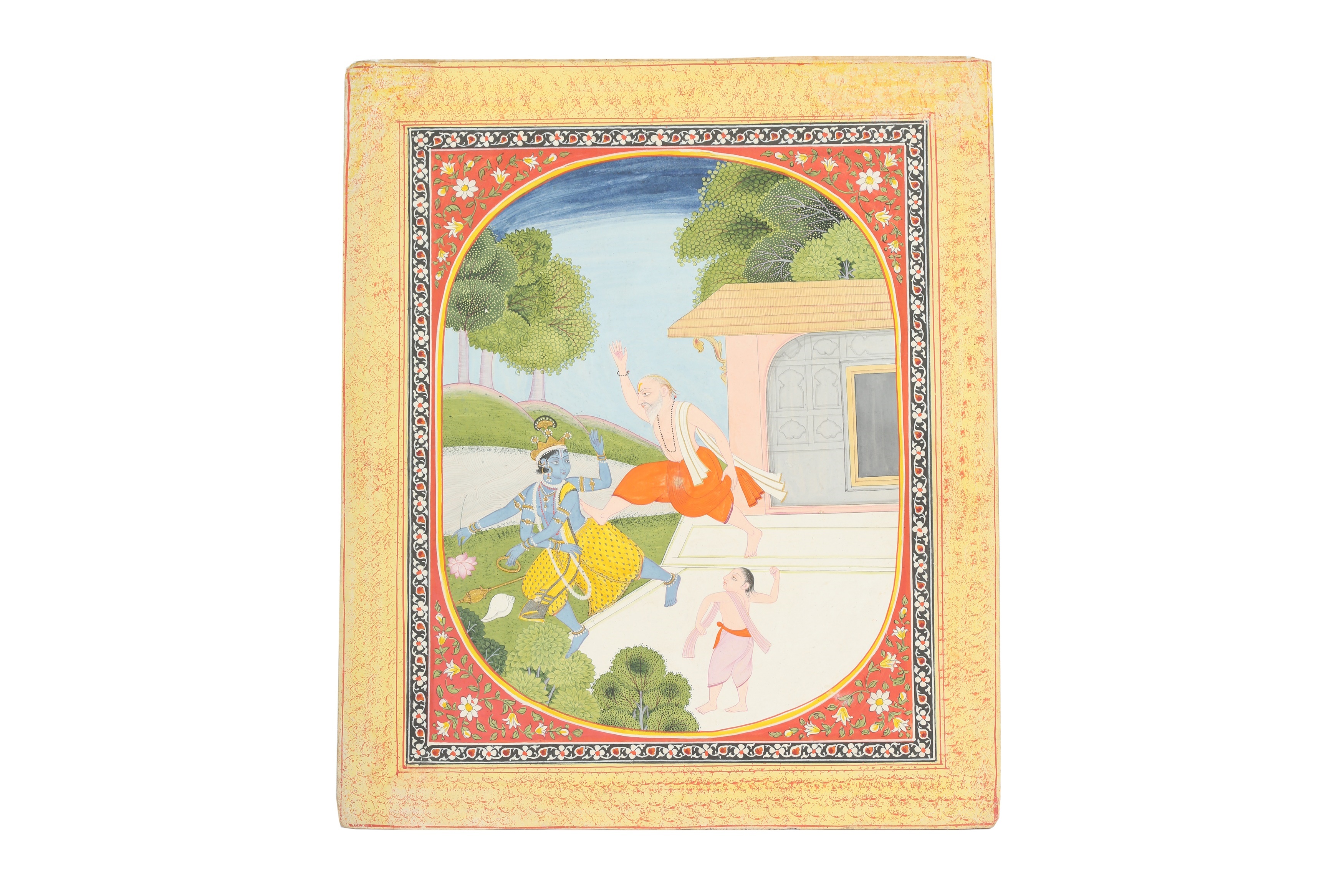 The choice of this painting's subject is rather unconventional. The Maharishi Bhrigu, one of the great sages of the Hindu tradition, is shown attacking Lord Vishnu and kicking him with his foot. This scene refers to a Hindu legend, known as the Patience Test of the Trimurti, in which many great sages gathered on the bank of the river Sarasvati to establish who out of the trinity of gods, Vishnu, Brahma, and Shiva, was the most important and to whom they should offer the Pradhanta (Master) of the Maha Yagya worship. Bhrigu was appointed as the sage that would test the deities.

After briefly confronting Brahma and Shiva with dissatisfactory results, Bhrigu tries to engage Vishnu, but he is deeply asleep on the Serpent Shesha. In an outburst of anger and frustration, Bhrigu kicks the God on the chest to wake him up. Upon his awakening, Vishnu greets the sage and start massaging his feet, concerned he had hurt his feet in kicking the God's chest. Bhrigu, ashamed of his ego and in total awe of the God's mercy and patience, elects Vishnu as the greatest deity of the Trimurti.

Some elements worth noticing here are the presence of the Vaishnava tilaka on the forehead of the sage, already hinting at his devotion for Vishnu and his final decision. Similarly, the facial expression of Vishnu shows no anger, surprise or disappointment instead, he may look a bit surprised and defenceless. At a first glance, the beholder may even think that Vishnu must have done something wrong to anger the sage and thus, sympathise with Bhrigu: the subtle double entendre of this painting is what makes it unusual. Although there is no sign of the Serpent Shesha, the presence of the river Sarasvati to the left creates an immediate link with the legend of the Trimurti Patience Test, reminding the beholders not to be hasty in their judgment. 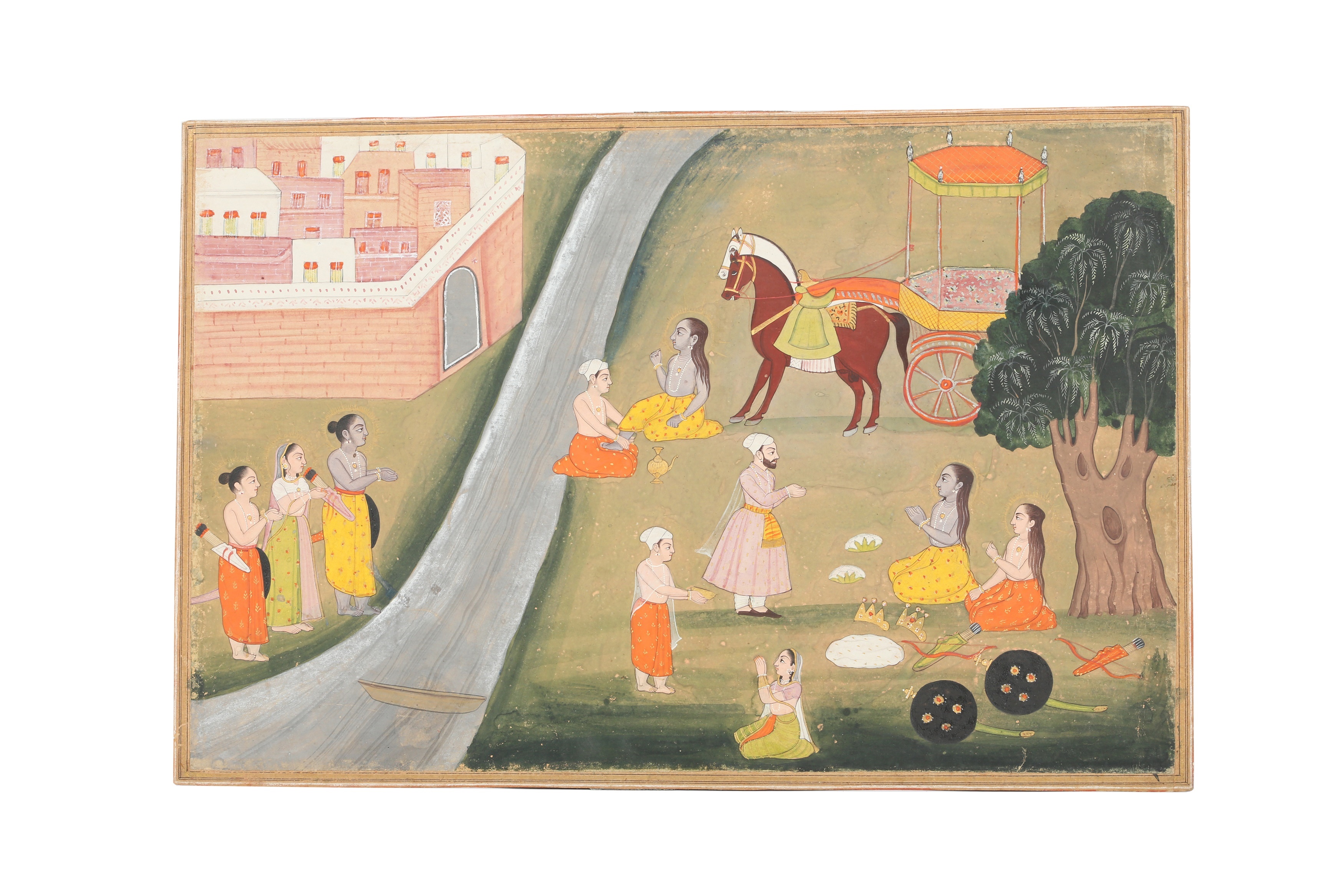 The composition is organised in chronological order from left to right, as if it was a comic strip and the story was unfolding under the viewer's gaze. Unlike Western art, Indian art will feature several scenes in one composition telling a visual story. Here, the trio (Rama, Sita and Lakshmana) is about to cross the river to finally get home, after 14 years in exile. Around their heads, flaming golden haloes symbolise their divine nature and emphasise their roles as heroes. Once returned, they are greeted, welcomed and treated by the locals as the rightful rulers of Ayodhya: Rama's feet are being washed by a courtly attendant; a royal palanquin in the background is awaiting them; a well-dressed courtier offers Rama and Lakshmana their lotus crowns while they sit underneath a tree. The composition is rich in details and emotions, but it is also wisely laid out, giving the viewer enough time to dwell on each scene and rejoice in Rama's return. 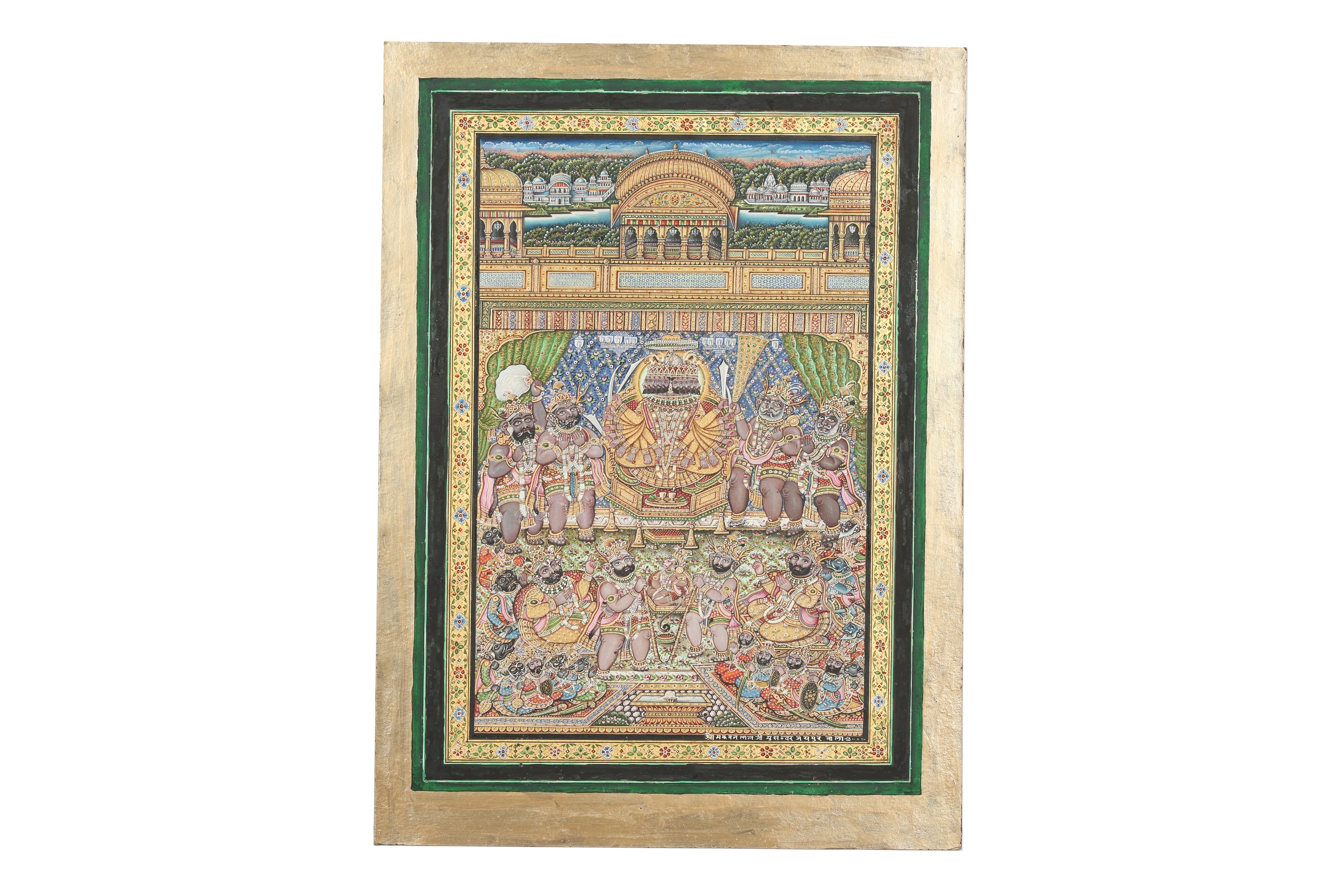 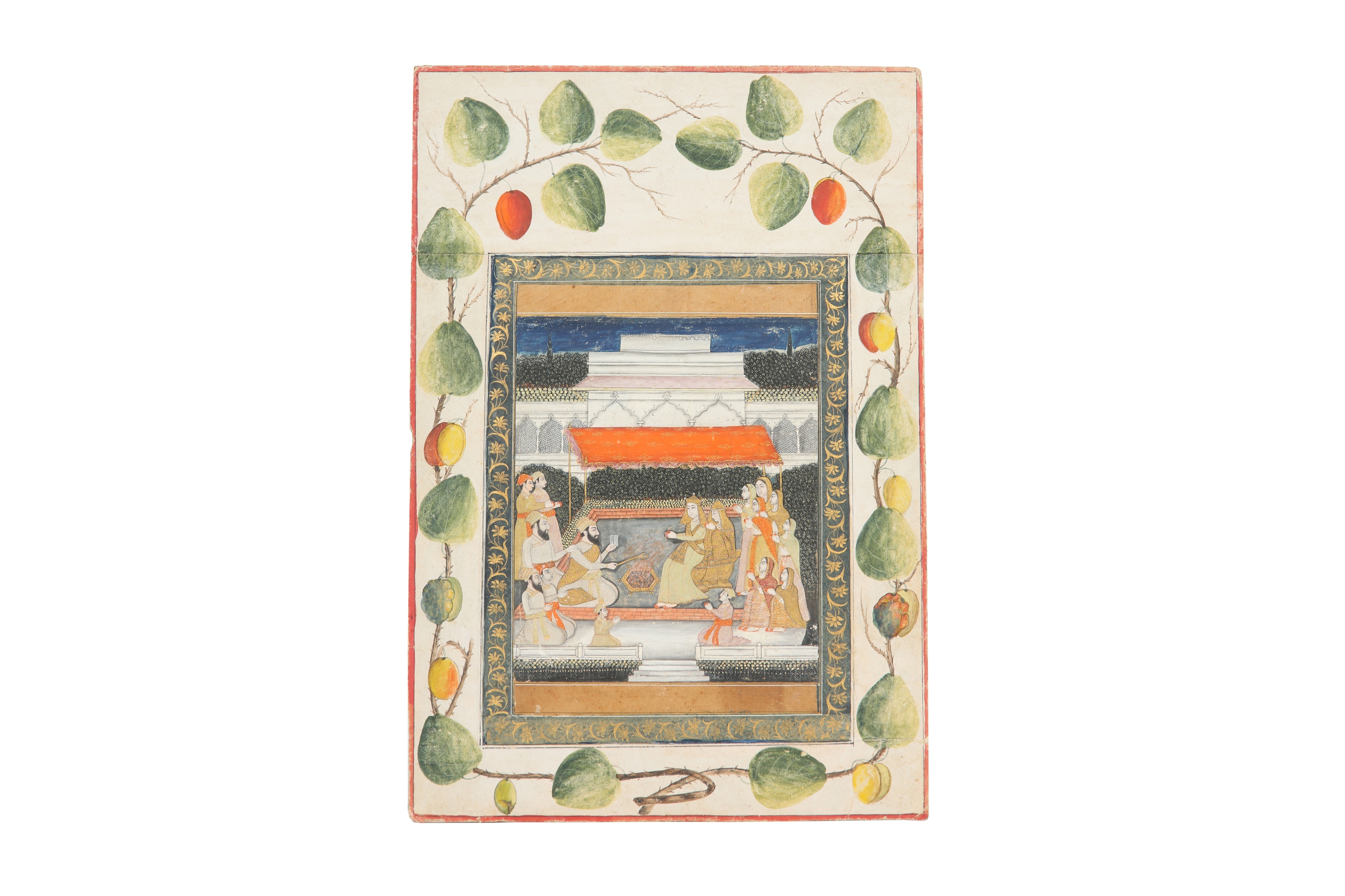 The influence of the Mughal pictorial tradition is very clear in this painting. The attention to detail, level of symmetry, and volume, dominating the scene, are quintessential features of many Mughal productions, both during the Mughal empire and in the years following its fall. Every character is depicted with his / her own peculiar features, suggesting a degree of naturalism and faithful rendering, almost like a photograph of its time.

The headdresses of the two noble ladies in the centre are of particular interest, given their unusual shape. Departing from the typical veils, shawls and turbans often seen in depictions of Indian ladies in the zenana and at court, these headdresses seem to be much more in line with Central Asian female headgears and fashion traditions. Indeed, their design are reminiscent of the shokulo, a traditional bridal headdress originating from Kyrgyzstan and widely in use in other parts of Central Asia, which features a high conical shape and is adorned with furs, feathers, jewels, and small amulets; and the Uzbek tubeteika, a more ornate variant of a female skull-cap. If Central Asian bridal headgears are featured on purpose by the painter, one may suggest that the yajna ceremony depicted in the composition is likely to be a Vedic wedding ceremony performing the traditional Indian Hindu ritual of Vedic yajna around the fire. The roots of this tradition are found in hymn 10.85 of the Rigveda, which is also called the "Rigvedic wedding hymn".

These three favourites echo how Dexter built his collection, he said of his collection, “I simply bought what I fancied and remained just a one-man-band with a liking for the unusual”. This passion for the unconventional, whimsical, and unusual ignited his collection and career since the start, when at the age of 18 he began running an antiques and second-hand shop in Leicester, England. Shortly after, he bought his very first Ushak carpet from a Polish dealer for the princely sum of £25.00. For the last 30 years, to say it in his own words, “this world of [Islamic and Indian] art has been an entire lifetime's trip”. It is with great pleasure that we offer his collection to the next generation of ‘art custodians’, as Dexter likes to define them: may you all find some joy, erudition, respite and amusement in the works of art now on offer.

Evening View with a glass of wine

For further highlights from the sale, see the Vanity Catalogue or view the Online Catalogue.

For more information or to book a viewing appointment contact: ghislaine@chiswickauctions.co.uk.