A taste of the Orient

On Tuesday February 10th we will be holding our first
sale of Asian Art, starting at 12 noon.
It will be followed by the General sale.

Following a number of recent successes, Chiswick Auctions is pleased to announce its first Asian Art sale, which is bound to attract both old clients and fresh faces. More than 200 lots will be offered, predominantly Chinese ceramics, decorative arts and paintings but also some notable South East Asian pieces and works from Japan and Korea from private collections and estates. One of the many highlights is a famille-rose enamel decorated triple gourd vase with a Guangxu mark and of the period estimated at £1000-2000. Also on offer will be an unusual famille-rose enamelled porcelain hat stand modelled from a Qianlong mark and period piece in the Chinese imperial collection in Taiwan and dating to the late 19th/early 20th century. The estimate is £8000-12000. 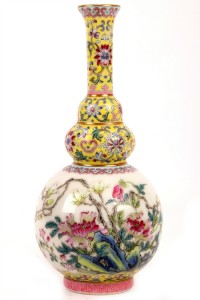 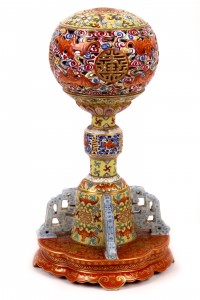 Coming up, on Tuesday 17th February we have a sale of Antique & Collectable Toys, Dolls and Teddy Bears, followed by more Vintage and Designer Fashion. The popular 20th Century and Contemporary Design sale returns on Tuesday 24th February, with Medals and Militaria on 3rd March and the Fine sale on 10th March.
We accept consignments up to 3 weeks before each Specialist sale, and every week for our General sales. Click here for the calendar.