It is always a real pleasure when, whilst cataloging a collection, every item is straightforward and easy to identify.

Even better is when, amongst the collection, the eye is caught by a mysterious object which one has never encountered before. Especially when the item in question gives off a surprisingly pleasant smell of spice as opposed to the usual sneeze-inducing cloud of dust.

The collection was formed by Mr Voigt, German photographer that travelled extensively during the 1950s-1960s, and includes a wide variety of ancient art and ethnographic items.

The ‘spicy’ object is a simple cylindrical container filled with dried lichens and leaves. At a closer look the item is made of cloves threaded together – hence the delicious smell that first attracted my attention.

Threaded clove items come originally from Indonesia – clove itself is native to the Maluku Islands so little surprise there – and some examples have entered museum collections around the world. Their function, however, is still not completely clear.

Charlotte Dixon, Phd candidate at the University of Southampton in collaboration with the British Museum, is studying these objects as part of her research project, in particular a group of model boats made of threaded cloves. She believes that such items were produced in the 19th or early 20th Century and were likely to be early souvenirs.

Other containers similar to the one in the Voigt Collection have been recorded as being used for ceremonial purposes. In particular Charlotte showed me a box containing dried betel leaves in the Museum Siwalima. The container was used in a ceremony for the museum’s relocation and ‘symbolises the plentifulness and unity of the Maluku Islands’.

Despite the festive season coming up, all you mulled wine lovers will have to wait until the 2nd February when the Voigt Collection will go under the hammer as part of our next Antiquities and Tribal Art sale.

Here is a link to Charlotte’s post on the British Museum’s blog – get in touch if you have a similar treasure in your collection: 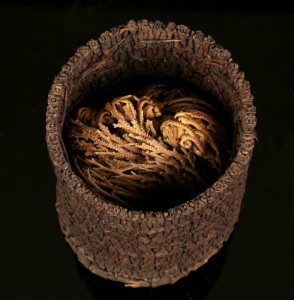 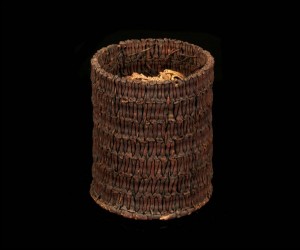