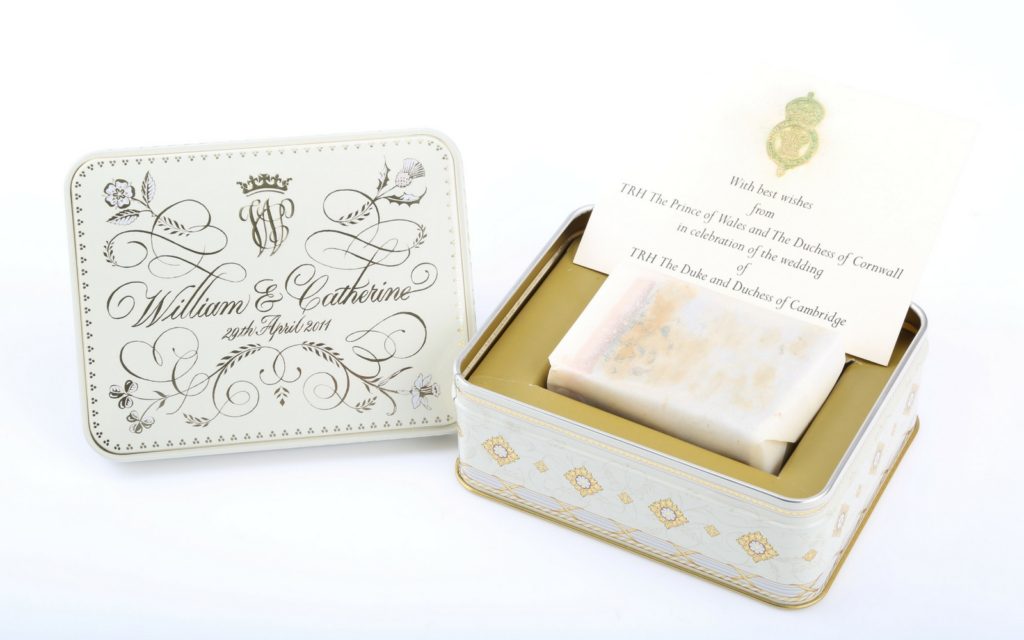 A slice of fruit cake from the Royal wedding of The Duke and Duchess of Cambridge, which took place at Westminster Abbey in 2011 and was watched by more than two billion, is offered in the forthcoming Printed Books and Manuscripts auction taking place on 27 September.

Originally given to guests as a special souvenir, this iconic component of the Royal wedding was an eight-tier bespoke creation crafted by cake-maker Fiona Cairns that took five weeks to complete. This culinary masterpiece was the centrepiece at the reception, which took place in the picture gallery at Buckingham Palace. It is said that The Duchess of Cambridge requested the Joseph Lambeth technique used for cake decoration. This lavish concept was born in The Lambeth Method published in 1934 and remains one of the most admired and skilled techniques used. The sophisticated technique is based on the English tradition of 'overpiping', which creates three-dimensional rows of intricately piped leaves, flowers and garlands.

The Duchess of Cambridge also wanted the cake to reflect the ‘language of flowers’, which consists of 17 different types of foliage that each hold a particular meaning. It is reported that Fiona Cairns took her inspiration from the architectural features in the room such as the garlands on the walls, which were recreated on the fourth tier of the cake. The elaborate cake was covered in cream icing and adorned with 900 exquisite sugar-paste flowers, including roses and apple blossom.

The slice of cake set to go under the hammer at Chiswick Auctions next month, shown above, is displayed within its specially commissioned cream and gilt commemorative tin, designed by Peter Windett and Sally Mangum. Also included is a printed card that reads, ‘With best wishes from TRH The Prince of Wales and The Duchess of Cornwall in celebration of the wedding of TRH The Duke and Duchess of Cambridge,’ accompanied by the Royal Crest printed in gilt.