The threatening appearance of the trombash ceremonial knife often means it is usually mistaken as a weapon and, arguably, it is designed with this purpose in mind. However, in the north western corner of the Democratic Republic of Congo, this throwing knife was used as a rather interesting form of currency by the Bushongo tribe and it soon became a status symbol in itself.

One of the ’Trombash’ ceremonial knives in the upcoming Antiquities and Tribal Art sale originated from the Democratic Republic of Congo and boasts an iron blade and ivory handle carved with grooves and dot and circle motifs. The materials iron and ivory were primarily reserved for the most important members of the group, and therefore one can assume this knife belonged to someone high up within the tribe; knives made of brass and copper could only be used by royalty.

In addition, the sickle-shaped blade features two holes, believed to resemble the number of wives that the owner of the knife had.

The upcoming Antiquities and Tribal Art sale will take place on the 14th September at 11am. 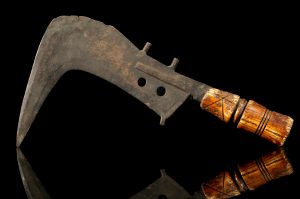