Our second A Middle Eastern Journey sale is taking place on Monday 23 November, and this is your invitation to consign.

We are seeking ethnographic objects and works of art, items collected on travels and more to build a sale that will highlight the dialogue and artistic exchanges which have occurred between Europe and the Middle East, and along the Silk Road.

To celebrate and reflect on the success of the sale’s first year, let’s take a closer look at four previous lots, letting them transport us to their place of origin as we discuss the cultural context behind them. 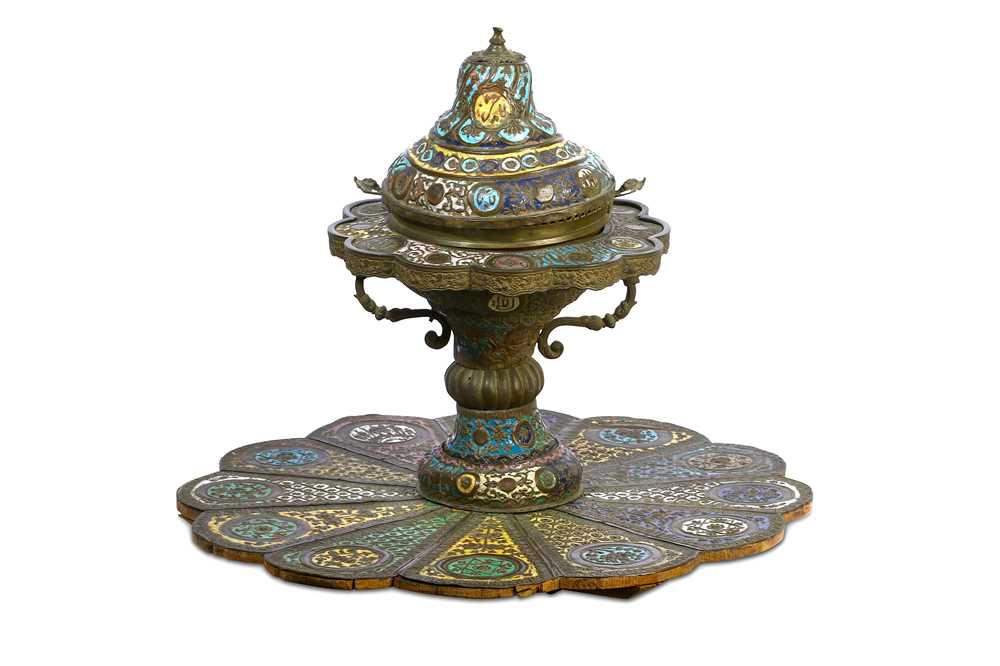 Braziers are a spiritually symbolic object, believed to be connected to the Holy Sphere and to God’s prayers, braziers are used to purify one’s self. This item dates back to the late 19th – 20th century from Ottoman Provinces. The shape is very similar to European models, the form is comparable to bowls used in France and Germany around the mid-19th century. This coexistence of two distinct styles within a single object eludes to both the Ottoman’s acceptance of European artistry and the expansion of European influence. A fluidity is present within the brazier, as two contrasting heritages blend together to shape and form its particular attributes.

Lot 69. Richmond (E.T.) The Dome of the Rock in Jerusalem: A Description of its Structure & Decoration, FIRST EDITION 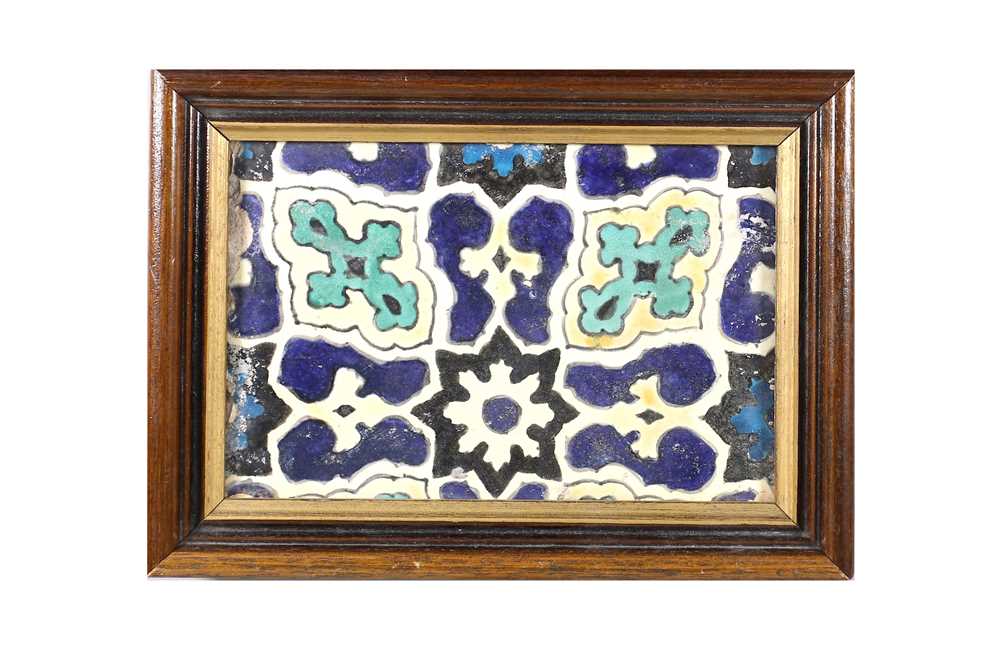 The Dome of the Rock is an important cultural and religious site located in Jerusalem, characterising the city’s landscape. Although a shrine rather than a Mosque, it is an important place for Muslim worshippers, but also holds significance for Jewish people as the rock, around which the dome was built, is believed to be the site where Abraham was to sacrifice his son, Isaac. The site and history of both the city and region gives the monument meaning for Christian believers as well.

Built-in the 7th century, during the Umayyad dynasty, the building has been continuously repaired and modified. Ernest Tatham Richmond, was a British architect who consulted on the building during the 1920s. Studying and drawing the monument, in 1924 he published The Dome of the Rock: A description of its Structure & Decoration which formed part of Lot 69. The other two pieces in the lot were tiles removed from the building during a period of restoration. It was common for removed tiles to be sold at the Bazaar to British and other Western officials.

Due to the significance of the site to people of Muslim, Jewish and Christian faiths, the tiles and the motifs are known to many people and can evoke a physical connection to the spirituality of the place of worship.

A photo album is an emblem and symbol for families, a tradition that everyone experiences worldwide. These three albums offer a unique perspective into the life of Western travellers, while visiting locations such as Tangier in Morocco, Constantinople (Istanbul) in Turkey, Tehran, Isfahan, and Shiraz in Iran, and Zanzibar in East Africa. The images are from the point of view of the families themselves, sharing their individual experiences, and providing a true and authentic outlook of their visits.

During the 19th and early 20th century, the Middle East was a popular tourist destination for both Europeans and Americans alike, and there was a simultaneous demand for Middle Eastern decorative arts. Personal records, such as these albums, were not only individual souvenirs of an epic journey but were also used by academics including anthropologists, journalists and missionaries too.

As modern-day observe collecting albums like these, transforms them into representations of the people and places, while also bringing forth a strong sense of preservation. While these photos continue to be admired, the generations of families depicted, continue to live on and tell tales of their lifetime. 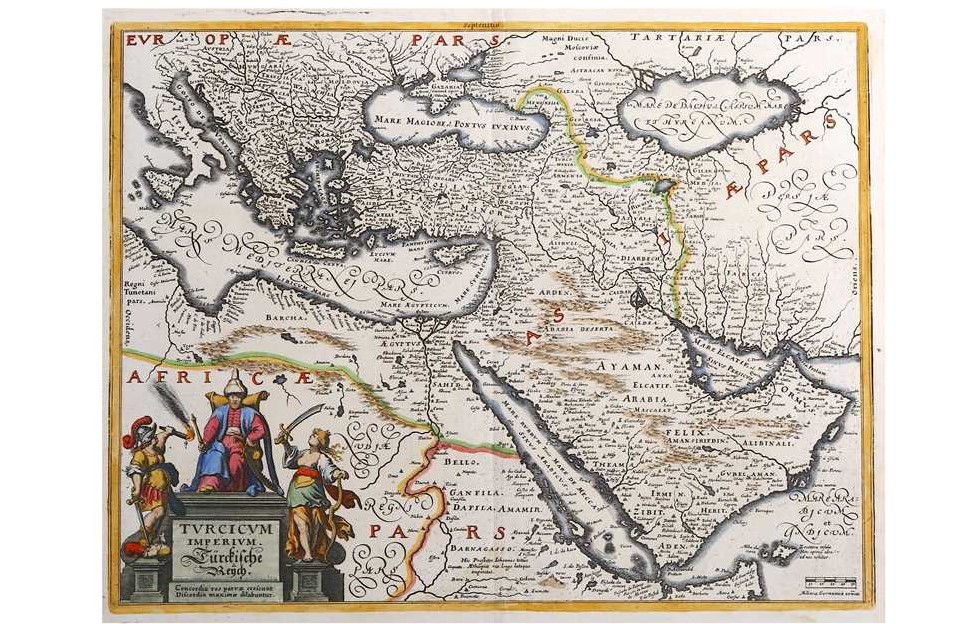 Maps are an effort to visualise and represent the world. Although we might typically think of them as geographical representations, they also encompass political relationships and have been employed as a tool of power, particularly as a method of controlling and monitoring political space.

Part of lot 84, is a hand-coloured map of the Ottoman Empire, taken from an Atlas published in 1635. Showing the reach of the Ottoman Empire stretching from to the Black and Caspian Seas and reaching the Saudi Arabia peninsula, the map captures the Ottoman rule at a particular moment in time after its peak years and at the beginning of its gradual decline. It also captures the empire, from a European perspective; Matthaus Merian was a Swiss engraver, known for his city plans and panoramic views and owner of a publishing house. One of his most popular works was a series of Topographia, which included city plans and views, as well as maps of most countries and a World map.

In the Ottoman world, there was an extensive tradition of mapmaking and cosmological writing which was in dialogue with Western cartography. During the 16th century, following the expansion of the Mediterranean regions, Ottoman geographers collated existing maps already in circulation in the region and combined them with new information as well as traditional Islamic writings. Late Ottoman geographical practice can be seen as a fluid blend of Islamic and European traditions.