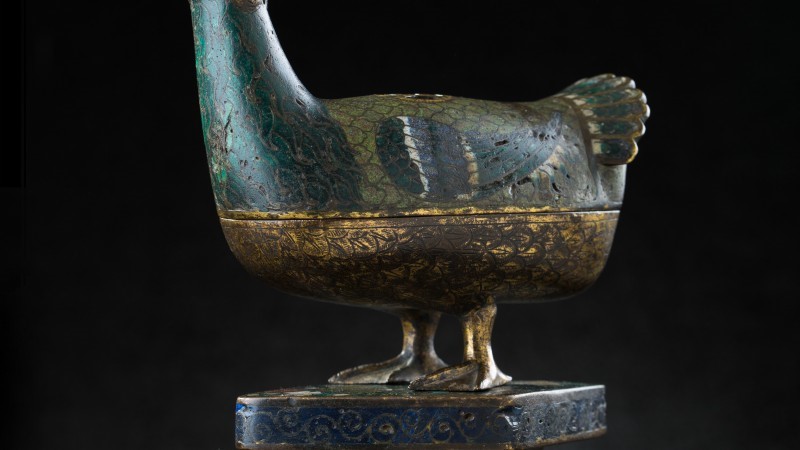 Duck-form censers have a long history in China dating back to the Han Dynasty (207 – 220). They were revived during the Song Dynasty and continued to be popular through to the Qing dynasty (for a pair of mother of pearl duck-form boxes see lot 73 in the present sale). It was arguably during the Ming, however, when duck-form vessels reached the zenith of artistic achievement. Examples are known to have been produced in enamelled porcelain, celadon, bronze and cloisonné.

The present example offered in the upcoming ASIAN ART sale of 5 May 2015, exhibits traits both typical and unique among the canon of known Ming duck censers produced in cloisonné enamel.

The top of the base, on which the duck stands, is decorated with a large blossoming white lotus flower and a red bud among lotus leaves, the horizontal face below is decorated around with scrolling waves, meaning that when viewed from a high level of elevation, the duck appears to be floating on a pond of flowers above a surface of water, an effect intensified by the translucency of the green-blue enamels.

When viewed from the side, the visual effect is somewhat more formal and geometric, the outer vertical faces of the stepped base are decorated with matching continuous scrolling cloisons sandwiching a wider inner section with a continuous pattern of white florets, two on each of the four faces, and with alternating red and black centres. This side view pattern is broadly similar to the South Kensington duck.

This observation situates the piece uniquely within the canon of Ming Dynasty cloisonné enamel duck censers. The NPM piece, dating to the early 16th century, a century before the present piece, is presented on an oval base supported by four feet and can be seen as a prototype for the present piece. The vertical face contains a single ring of scrolling cloisons on a blue ground similar to two bands on the present piece.

Garner, in commenting on cloisonné enamel duck censers states, “a number of figurative ducks are known, generally mounted on square or rhomboidal bases” (Garner 1962, p 83). Indeed this is true of a number of ducks, including the Stoclet duck, the single duck from the Amezaga collection and the pair of ducks from the Pierre Uldry collection. However, another important category of base is that of domed lotus flower-form form, of which the Palace Museum, Beijing holds three examples, and a pair reside within the Robert Chang collection.

Of these, all but one in the Palace Museum – over whose surface the cloisons mark out leafy veins – depict a lotus flower, creating a visual play between the lotus form base, and the flowers and foliage above the blue watery ground.

The present piece continues this visual play placing the duck upon the lotus flowers above another layer of translucent waves whilst retaining the formal structure of the trapezoid base. This feature of the base is most closely reflected in the South Kensington duck but the effect is not fully realised and only in a form derivative of the present example.

Realism of form is perfected to a significant extent in the present duck. The translucency of the green glass eyes gives them a lifelike glow and the feathers are unique amongst known examples of Ming cloisonné enamel ducks by being rendered in at least three distinct techniques. Flame shaped feathers down the neck and lappet feathers on the upper section of the duck are outlined by cloisons. On the underside of the duck's tummy the feathers are incised beneath the gilded surface. Finally, on the gilt bronze head behind the eyes, tightly curling feathers are modelled in relatively high relief, bearing the closest resemblance to the Hermitage duck.

It is a pleasure to bring this piece, hidden in private collections for over half a century, to the attention of scholars and collectors, and it is hoped that it will continue to instil delight and fascination in those around it for the centuries to come.

Formed in two sections, the gilded bottom designed to support the incense, raised on a lozenge-shaped base by two sturdy legs and webbed feet. The duck is modelled with lifelike proportions and the head tilted round to the left and open for the release of smoke and with a curling tongue slightly protruding. The expressive face is enhanced by modelled facial details and translucent green glass eyes. A gilded cash shaped opening, also allowing for the release of smoke is positioned in the middle of the duck's back. The cloisonné is composed of mixed and unmixed enamels have been used to form a varied palette, 24cm H.