Ahead of the British and European Fine Art auction, a letter from David Hayes, Publications Editor at the Camden History Society provides a fascinating insight into 'Camden Town' by Harry Rutherford. 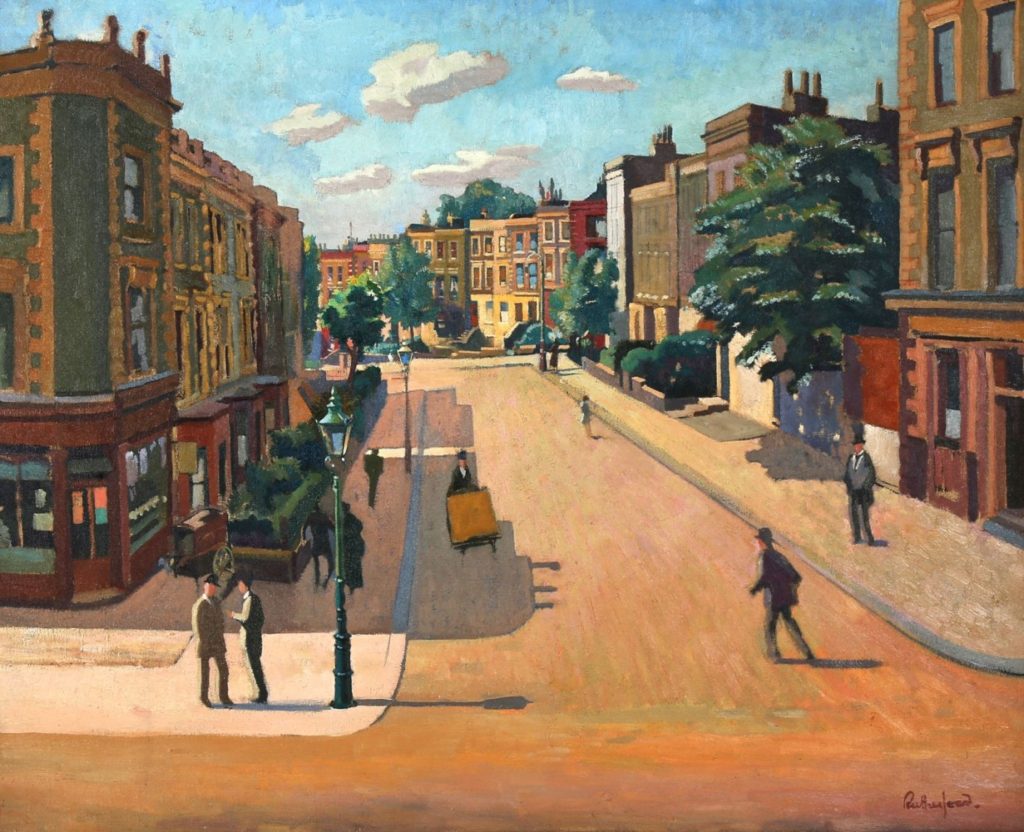 The painting, offered in the forthcoming British and European Fine Art auction, depicts a striking exterior street scene bathed in midday light and compositionally closely resembles 'Camden Town', c. 1935, by Harry Rutherford which is in the Royal Academy Collection.

In 1926 in Manchester, Harry Rutherford (1903 - 1985) took over the running of Walter Sickert's painting school and their friendship was to be lifelong, Sickert later describing Rutherford as 'My intellectual heir and successor.'

Populated with figures in transit casting shadows, to the right of the composition is a solitary single male figure in a top hat observing the scene. It has been suggested that this figure is a depiction by Rutherford of his mentor, the artist Walter Sickert.

Between 1927 and 1934, Sickert had established the last of his painting schools at No. 1 Highbury Place in Camden, and Rutherford may well have used these studios at this time. He would later set up his own studio after Sickert departed London for Broadstairs, Kent, in 1934.

During the Second World War, Rutherford's studio was obliterated during a bombing raid with the loss of a considerable body of his Camden work, making this work a rare example of his output at the time. When he left school at the age of 14, Rutherford sought to develop his drawing skills and alongside fellow artist LS Lowry attended evening classes at the Manchester School of Art. Whilst there are echoes of Lowry's figurative depictions in this work by Rutherford, alongside the undoubted influence of Sickert, it is clearly a singular work by an important British artist.

David Hayes addresses the painting's intriguing provenance and considers the compelling questions surrounding Rutherford's studio and the view depicted in the work: 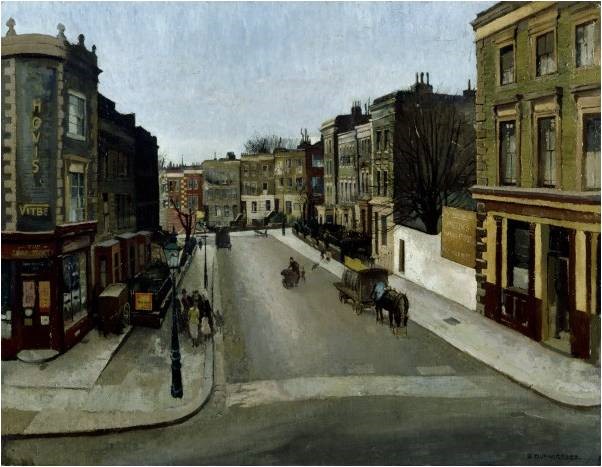 The view in the two versions is not recognisable as anywhere in Camden Town proper. The RA’s 1935 version is actually the more helpful in identifying the actual location.

The HOVIS and VITBE legends on the left-hand corner shop identify it as a baker’s. If the image is enlarged, the inscription on the board to the left of the right-hand corner building clearly contains the word MEUX’S, followed illegibly but probably by FAMOUS STOUT, the slogan displayed by the brewery on all its pubs. So, we are looking for a road junction with a baker’s on one side and a Meux’s pub on the other. (It’s pronounced ‘Mewks’ by the way.)

Brewery History, http://bit.ly/2qbWrYM lists all of Meux's pubs in north London. The only one actually in Camden Town is the Camden Arms in Randolph Street (now renamed the Colonel Fawcett), and that doesn’t fit the picture at all.

So, how about the Leighton Arms in neighbouring Kentish Town? If you go to http://bit.ly/2qccKod, click on 'See outside' to get the Google Street View, and then on the white and beige building, you're in Torriano Avenue. Pan to the right for a view which nicely matches that in the Rutherford paintings, complete with the tree-filled gap still there on the right.

I conclude that Rutherford’s view is of this uppermost section of Torriano Avenue, westward from Brecknock Road as far as the left-hand bend where it turns southward.

The 1933 street directory lists the Leighton Arms (landlord, Jn. Dennehy) at 101 Brecknock Road. No.99, on the other corner is the bakery of Mrs Hilda Mary Payne.

Might Rutherford have lived or had a studio locally? The answer is yes. In the 1937 street directory, ‘Rutherford, Harry’ is the occupant of Studio 4, Brecknock Studios (one of six). In the same year the Islington North & East electoral register likewise has him in Studio 4. In the two available earlier available directories 1933 and 1936), he is not listed there - or, for that matter, anywhere else in London. The 1933 directory has an artist called Reid Adams in Studio 4, but directories were often 1 or 2 years out of date, and Rutherford could have rented the studio, either continuously or on and off, but never long enough to be officially recorded. In 1936, Studio 4 has no listed occupant. (I have made a list of the other studios’ occupiers if it’s of any interest.)

Rutherford did travel abroad at least once during this period. ‘Ancestry’ provides a record of his sailing from London on 1 September 1934, aboard the Highland Princess and bound for Vigo and then Buenos Aires. He was travelling with his slightly elder brother Donald (32), a ‘mine dealer’. The London address of both brothers is given as 25 Topsfield Parade, N8. That Donald was his brother is confirmed by the 1911 census, which has the Rutherford family living in Hadfield, Glossop, Derbyshire: father William (baker & restaurateur), mother Mary, sons George (19, baker), Robert (17, shorthand clerk), and schoolboys Donald (9) and Harry (8).

Brecknock Studios may well have been recommended to Rutherford by Walter Sickert, who back in 1909 had acquired ‘a large top-lit studio in Brecknock Road’ (Wendy Baron, p 138), retaining it until 1915 (ibid, p 139). This would be Studio 5 if it was he same one Sickert shared in 1910-11 with Spencer Gore.

I have left until last the real significance of the studios. Situated at No.142 Brecknock Road, on the eastern (Islington) side, Brecknock Studios were directly opposite Torriano Avenue! Rutherford’s elevated view of the street was probably taken from his own studio window.

The bakery at No.99 has subsequently been rebuilt and is no longer a shop. The Leighton Arms has recently closed. Brecknock Studios were demolished decades ago, and their site is now part of the greensward fronting Islington’s Upper Hilldrop (council housing) Estate.

Why did Rutherford choose ‘Camden Town Street’ as the titles of his paintings, when the street depicted is most definitely in Kentish Town? It would, of course, resonate with the name of the earlier Camden Town Group. And the Camden Town name was once often used loosely by people for an expanse of north London much wider than Camden Town proper. The house in Hilldrop Crescent (not far from the Studios), where Dr Crippen poisoned his wife, was invariably reported in the press as being in Camden Town, though actually in Holloway. Gillian Tindall, the historian of Kentish Town, whom I’ve consulted about this, has replied: “It does seem a bit feeble of him to have called it `Camden Town Street' when it is right in the heart of Kentish Town, but I think this is typical of the period. Kentish Town, as the older name, was well known to Dickens, but in the early 20C. Compton Mackenzie wrote emotively about Camden Town in his novel Sinister Street, making it sound as if the area stretched all the way to Hornsey, and that seems to have created an enduring notion that Camden Town was a huge, mysterious expanse - see David Storey's 1960s Flight into Camden. In those days house agents would hardly allow that Kentish Town existed: they called it `North St Pancras' or `Highgate Rise'! Whereas now, of course, people eagerly claim to live in Kentish Town.”