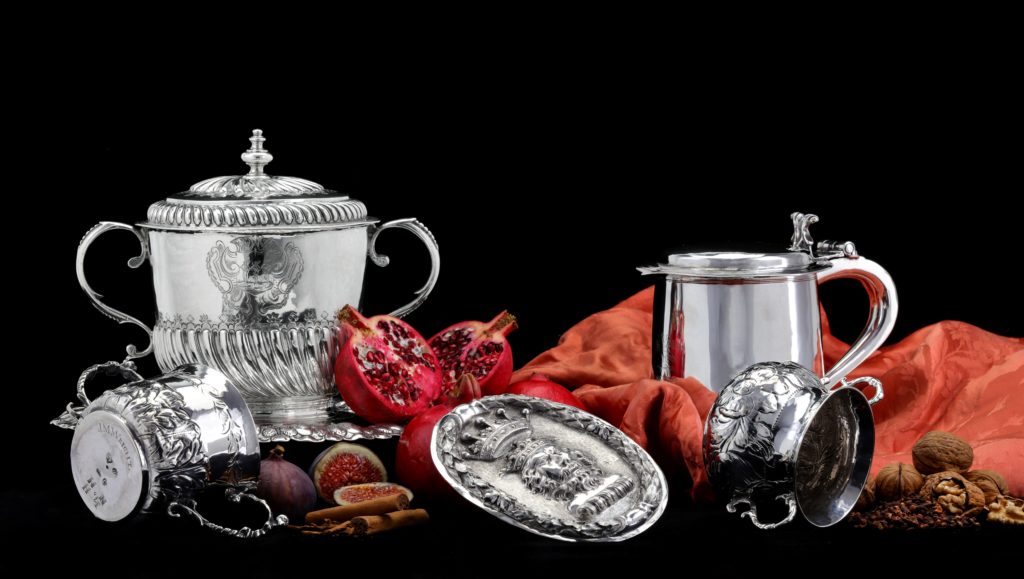 Rarity is a key factor in what drives something to be valuable, but rarity can be ascertained in different ways, either from exclusivity or survival in the face of destruction. For silverware, the latter is a key factor in the value of much antique silver. Due to various reasons including everything from war to overuse or poverty, silver was melted down over the centuries and it’s existence today is a testament to its past and continued future. In our Silver and Objects of Vertu sale on 23rd October, we will be offering eight pieces of 17th century English holloware, each made in the decades just before and following the Great Fire of London. 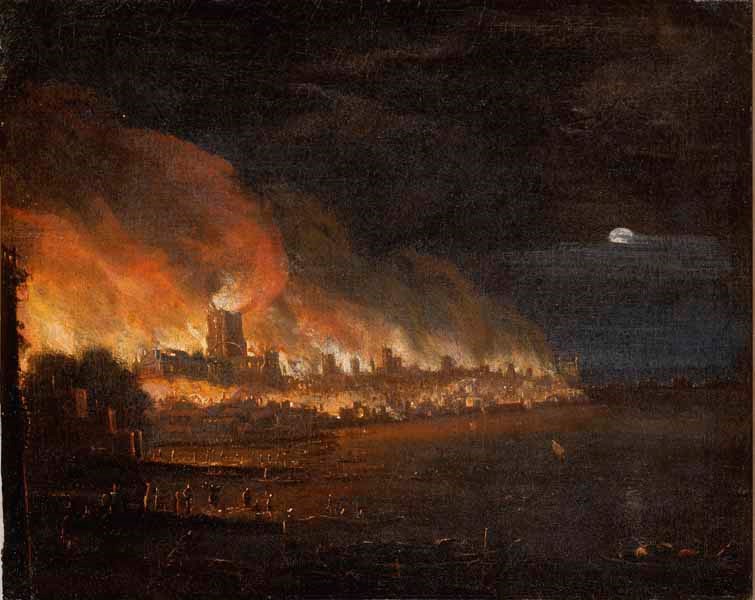 Surviving pieces of silver from the 17th and preceding centuries are in a distinct class of their own in terms of rarity. All are venerable survivors of any number of issues that may have befallen them during their own century, let alone the three more that followed. The civil war of 1642-51 saw a wave of destruction in unsettled political times, as well as the Great Fire of London in 1666 which incinerated so much of the capital and its contents. The 1697 Britannia act also introduced the new standard of working silver as Britannia standard (958/1000) instead of Sterling (925/1000) as compulsory until 1720. Additionally, as the 18th century dawned, outmoded silver was exchanged for heavier designs and new implements. The church often acted as a safe reuse for early ‘plate’ (as silver objects are collectively refereed to), but secular objects were not afforded such protection. Other than spoons, which do survive in reasonable numbers, holloware (vessels) survive in much fewer quantities and have taken on quite the allure for silver collectors and historians alike.

The earliest piece in the sale is marked for London 1656, the middle years of the English commonwealth under the stewardship of Oliver Cromwell as Lord Protector. An important addition to our known corpus of Commonwealth silver, this porringer stand belongs to a small group of surviving examples from the 1650’s. The circular salver with a central recession originally had a trumpet shaped conical foot and was the support for a porringer, (a twin handled vessel often lidded and used for serving a spiced oat-based pottage). Sadly, this example has lost its foot and the accompanying porringer it once supported. But what we do have is an articulate snapshot into a London goldsmiths’ life during this fraught period that remained largely inactive for Goldsmiths. 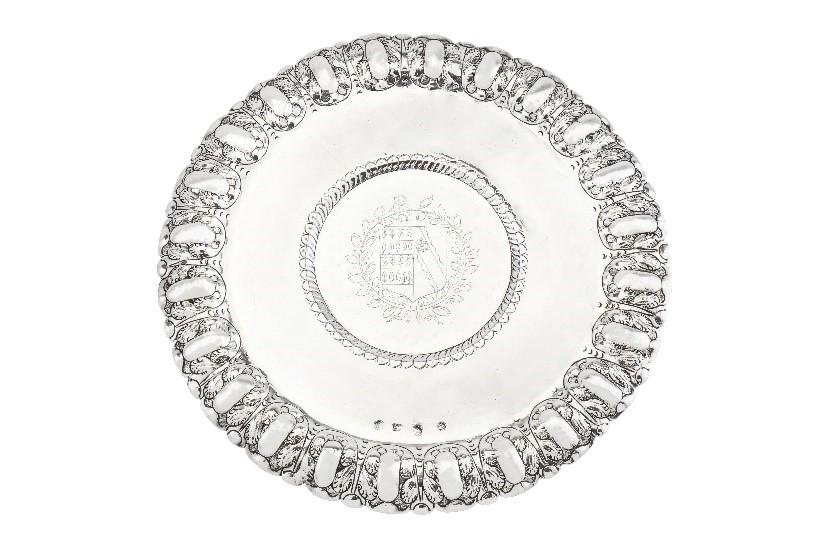 The Porringer is marked for Danial Rutty, a somewhat prominent smith given the number and breadth of his existing examples, however the shape and form of decoration have led to an attribution to the workshop of another less prosperous Goldsmith, Arthur Manwaring. Through comparison to other known surviving examples of porringer stands by him, which bear consistent idiosyncratic decorative features such as, the repeating crescent shape punch work, it would seem that Manwaring supplied this piece to Rutty who sent it for assay. Assay was a common practice throughout the history of silver, which tested the metal or ore to determine its ingredients and quality. A comparable piece of a lidded porringer and stand of 1655 marked for Manwaring was described by silver historian Michael Clayton as “one of the most important pieces made during the Commonwealth period”.

Related to this lot there are five porringers included in the sale; one of the more frequently encountered items of 17th century holloware. Interestingly, the smallest example which only bears a partially stuck makers mark has been attributed to the maker Thomas Mangy circa 1675. The Mangy’s were a prominent goldsmithing family across York and Hull in the 17th century. Provincial silver, especially that of the 17th century, is a great order of magnitude rarer than that made in London. Less was made in these provincial areas and as a result even less had the chance to survive the centuries that followed. 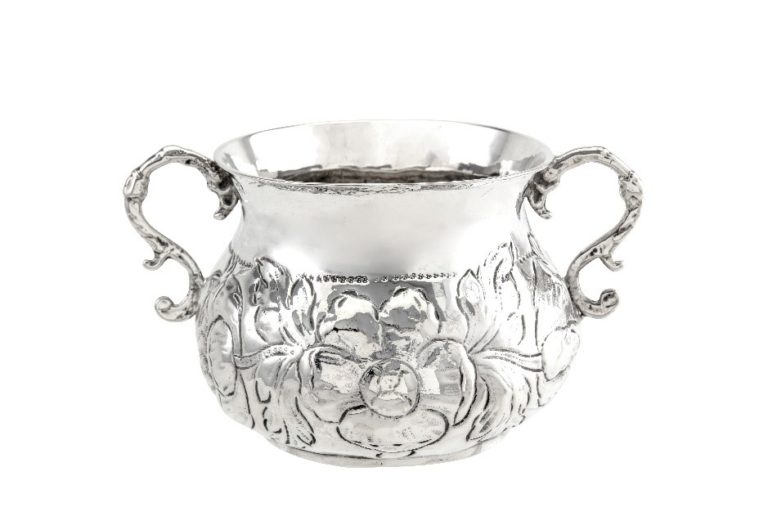 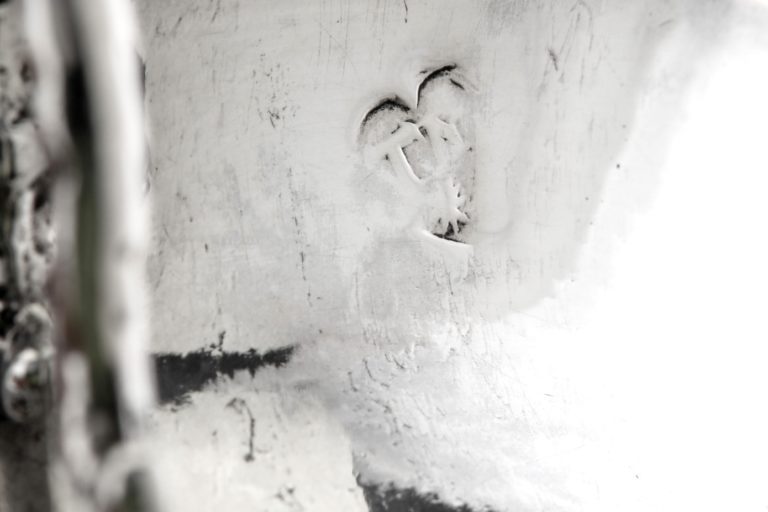 The most unusual and scarcely encountered item is the final lot, a livery or alms badge marked for London 1682 by Francis Singleton. Finely embossed with the crest and coronet for James Bertie, the first Earl of Abingdon (1653-1699), this piece represents perhaps the finest example of its kind to come to auction.

Almshouses are housing institutions set up by the wealthy to house the poor and aid their benefactor, which was part of a social expectation on the wealthy known as noblesse oblige. These badges would have been worn by the almsmen and almswoman where they were provided with a black 'frize' gown each year at 'Allhollentide' on Oct 31st and again at Christmas every fourth year, where they would be given a red 'frize' gown and would wear the badge on the left arm. Other examples have come to auction in the last forty years, including examples for eminent brewer, Emery Hill (1610-1667) and Sir Ralph Verney (1613-96) probably on behalf of his late wife Mary. This example is distinctly interesting not only because of its great state of preservation to the prominent and sculptural detailing of the Saracen’s head crest, but that it hails from the same period when Bertie was raised to the title of Earl on the 30th November 1682. An evocative, socially interesting and distinct piece that sets itself aside as a lead item of 17th century English silver. 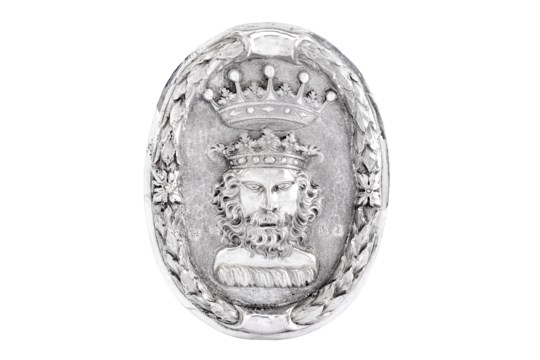 Our sale will be held on Wednesday 23rd October. For more information contact our Head of Silver & Objects of Vertu, John Rogers.