THE COLLECTION OF THE

A man of great values and charisma, Jean-Pierre’s memorable character touched the lives of many throughout his time. His passion for collecting Buddhist art led him on worldwide travels in search of unique pieces which could reflect his taste, aesthetics and beliefs. When he came across a piece with which he instantly felt a connection, Jean-Pierre would be drawn to the artwork with a sort of impulsivity characterised by deep emotion rather than superficial materialism or a desire to display possessions. He, in fact, conserved many of his pieces with a degree of privacy which allowed said connection to maintain its integrity. His spirituality dominated much of his decision-making, and purchasing art was no exception.With a profound interest for philosophy and metaphysical ideologies- his knowledge of which he continuously furthered throughout his life - Jean-Pierre would never turn down the opportunity of acquiring a piece which could embody and represent in a tangible manner the beliefs which resonated with his essence. His collection of Buddhist art is the very culmination of this notion,as it perfectly concretised the intersection between his spiritual interests and his devotion to art. Despite his ability to immediately identify works which reflected his ideas, Jean-Pierre nevertheless tended to carry out extensive research on artists and their art, so as to refine his selection and align meaning and aesthetic, which in turn allowed him to create a coherent and harmonious collection. Distributed between his homes in New York, London, Geneva and the South of France, his carefully selected artworks constituted a personal element which imbued these spaces with great energy and aesthetic beauty.

It is with great pleasure that Chiswick Auctions offers six previously unseen sculptural works of Buddhist and Hindu art which have been part of Jean-Pierre Yonan’s collection in London since the 1980s and 1990s. The auction is taking place on 29th April 2022 at 1pm and it is our wish to hand these artworks over to the next generation of passionate collectors who will not only admire them, but also fulfil their potential by researching them further and keeping their legacy alive.

The first piece in the collection comes from the ancient region of Gandhara, an area roughly corresponding to modern day north-western Pakistan. From the first to the third century AD, this region was under the control of the Kushan dynasty, Central Asian people who first invaded Bactria and subsequently settled in North-Western India3.

The Kushan kingdom was centred in two main areas: Mathura, in North-Central India, and Gandhara. Both areas distinguished themselves in the production of remarkable Buddhist artworks. The style of Mathura had a distinctive Indian flare and could be rightly considered the precursor of Gupta sculptural art. Meanwhile, the stylistic rendering of the image of the Buddha in Gandhara was the product of the aftermath of Alexander the Great’s campaigns, yielding a unique fusion of Western art canons and Eastern religious and philosophical concepts. This blend of Greco-Roman stylistic influence and Buddhist subjects led to a very prolific output of sculptures and figural panels, typically carved out of gray schist, the most readily available material in the region, which can be admired in numerous important private and public collections around the world.

Lot 200 presents several elements of the standardised sculptural canon of Gandharan art including the naturalistically rendered wavy hair tied into a round topknot (ushnisha); the oval face with perfectly arched eyebrows, a straight Greek nose, full bow-shaped lips and deeply cut, stylised eyes; lastly, the heavy-monastic robe (sanghati) with numerous deep pleats, reminiscent in style of a Roman toga. The halo at the back (now in a fragmentary state) and the dot in the middle of the forehead (urna) act as visual reminders that the figure we are looking at is the historical Buddha, Siddhartha, and not one of the many deities of the Greek Pantheon. Another identifying feature would have been the hands and their position (mudra).

The production of Gandharan Buddhist reliefs and sculptures started declining in the third century and completely ceased by the sixth century AD. Nevertheless, the innovative artistic vocabulary introduced by this region’s creations provided an ideal platform for the development and evolution of Buddhist images, not only in India, but throughout the Asian continent4.

3 Christian Luczanits in The Buddhist Heritage of Pakistan: Art of Gandhara, 2011, p13

Jumping forward a few centuries in time and eastward in space, our journey of discovery brings us to warmer shores, specifically to Thailand and Cambodia. As Fisher explains, the migration of peoples and ideas from India was one of the main cultural catalysts in South-East Asia, shaping not only art and mythology, but also written language, religion, mathematics, and science5. Hinduism preceded Buddhism in the region, but in the 6th and 7th centuries AD, its influence started growing and Buddhist faith became more and more established.

South-East Asian sculptural art and architecture witnessed their Golden Age in the period between the 10th and the 15th centuries AD, when large templar complexes were built and the ruling classes commissioned exquisite sculptures in a variety of media (mostly terracotta, sandstone and bronze). The South-East Asian sculptures here presented as part of the Late Jean-Pierre Yonan collection all belong to this rich and prolific period, and their different dates of production and features guide us step by step through the iconographic and stylistic evolution of the sculptural arts witnessed in this region, sublimating Indian and Sri Lankan artistic influences with local forms of expressions, canons of beauty and aesthetic sensitivity.

In Cambodia, pre-Angkor Wat sculptures were characterised by lively physicality and subtle animation, the faces always ignited by a gentle smile6.  However, during the classical Khmer period (10th –13th centuries), the sculptural canon became much more hieratic, stylised and prone to stasis instead of movement (see lots 201 and 204). This change was fostered by a shift in political ideology, whereby kingship and divine power were conceived as one, and therefore, sculptures were signs of divine authority on earth, intended to demonstrate power and success, and not human nature. With the rule of Jayavarman VII (1181 – 1219), a new chapter began for Buddhist art. The creations of this period saw the introduction of a wider range of figures, such as Bodhisattva Lokeshvara (Lot 202) and Prajnaparamita (Tara). The need to represent their individual features provided an unprecedented evolution of the iconographic vocabulary. What was established at this time, was continued successively throughout the generations of sculptors and artists who learned the craft. This adherence to the canon enhances each sculpture, bestowing on it a sense of timelessness.

Around the same time, Thailand was a divided country. The period between the 8th and the 12th centuries was quite tumultuous, with the country torn by both Indo-Javanese and Cambodian Khmer influences7.  Mon art (the art produced by the inhabitants of Thailand in the first millennium AD) became less and less in demand and it eventually ceased in Central and North-East Thailand in the 10th century under the impact of Khmer influence. Nevertheless, the last stronghold and artistic centre of Mon art, called Haripunjaya (modern Lamphun), continued producing images, especially of Buddhist subjects, right up to 1292-1293, leading to the creation of a new style8.

Haripunjaya sculptures (like our lot 203) are usually characterised by square faces; a thick band framing their faces along the hairline, a feature adopted from Khmer art; slightly swelled heads above the temples, with flatter tops and foreheads; joint, horizontal eyebrows; broad noses; and the hair is worked in small, spiky curls. Differently from the Mon period, when stone was the primary material for sculptures, terracotta and stucco became favoured materials in the Haripunjaya production, as the Wat Kukut stupa (early 13th century) and its five-storey tower housing stucco Buddha images in the Dvaravati style testify9.

When the Thai people took over at the end of the 13th century, considerable changes were introduced. Firstly, the prime materials used in the past such as stone and terracotta were largely replaced by bronze (either plain or often gilt). Secondly, the sources of aesthetic inspiration shifted from the locally available Javanese and Khmer productions to the Indian Pala and Sinhalese canons. 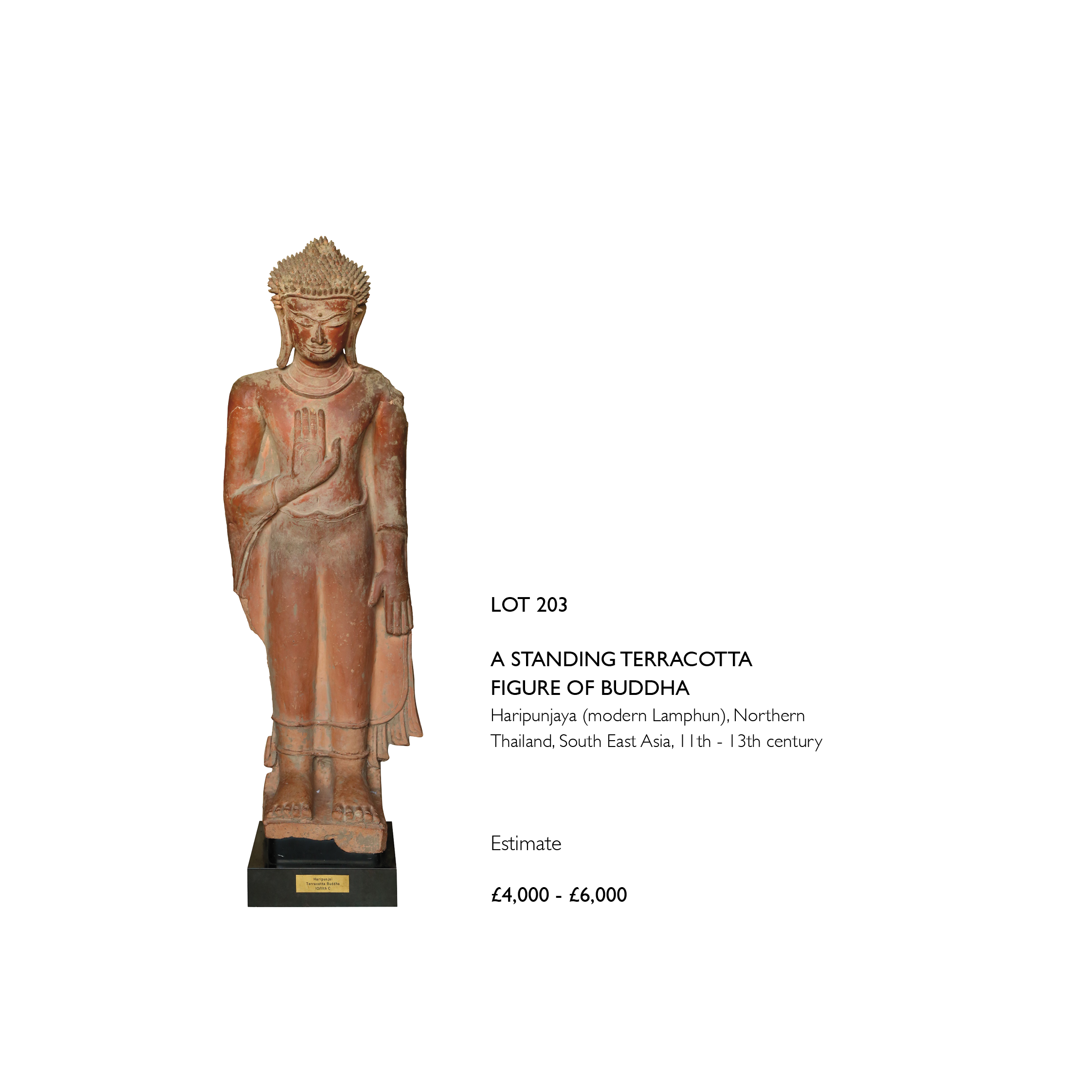 With the rise of a new capital in 1350, Ayutthaya (Central Thailand), the Thai kingdom was fully formed and ready to be the dominant power in the region until 176710.  The art of this period, often referred as Early Ayutthaya style or U-Thong C style (mid-14th – mid-15th centuries), is characterised by a wise and charming blend of features present in Sukhothai and Khmer sculptures, and the introduction of innovative elements, leading to the creation of a brand new aesthetic. If we take lot 205 as an example, the gentle, oval face and elongated silhouette of our Buddha present a clear Sukhothai influence. The band framing the hairline and the engraved contour around the lips are instead features typical of Khmer sculptures.

On the front of innovation, one can admire the flame-like element on top of the Buddha’s cranial protuberance (ushnisha), also called rasmi, a symbol of spiritual radiance inspired by Sinhalese examples and developed into a unique flaming conch-shell form in U-Thong C style art. Hands and fingers become much more elongated and mudras are revisited, introducing original solutions like the Calming the Ocean gesture (both hands in abhaya mudra), which appears to have been very popular at the time11. 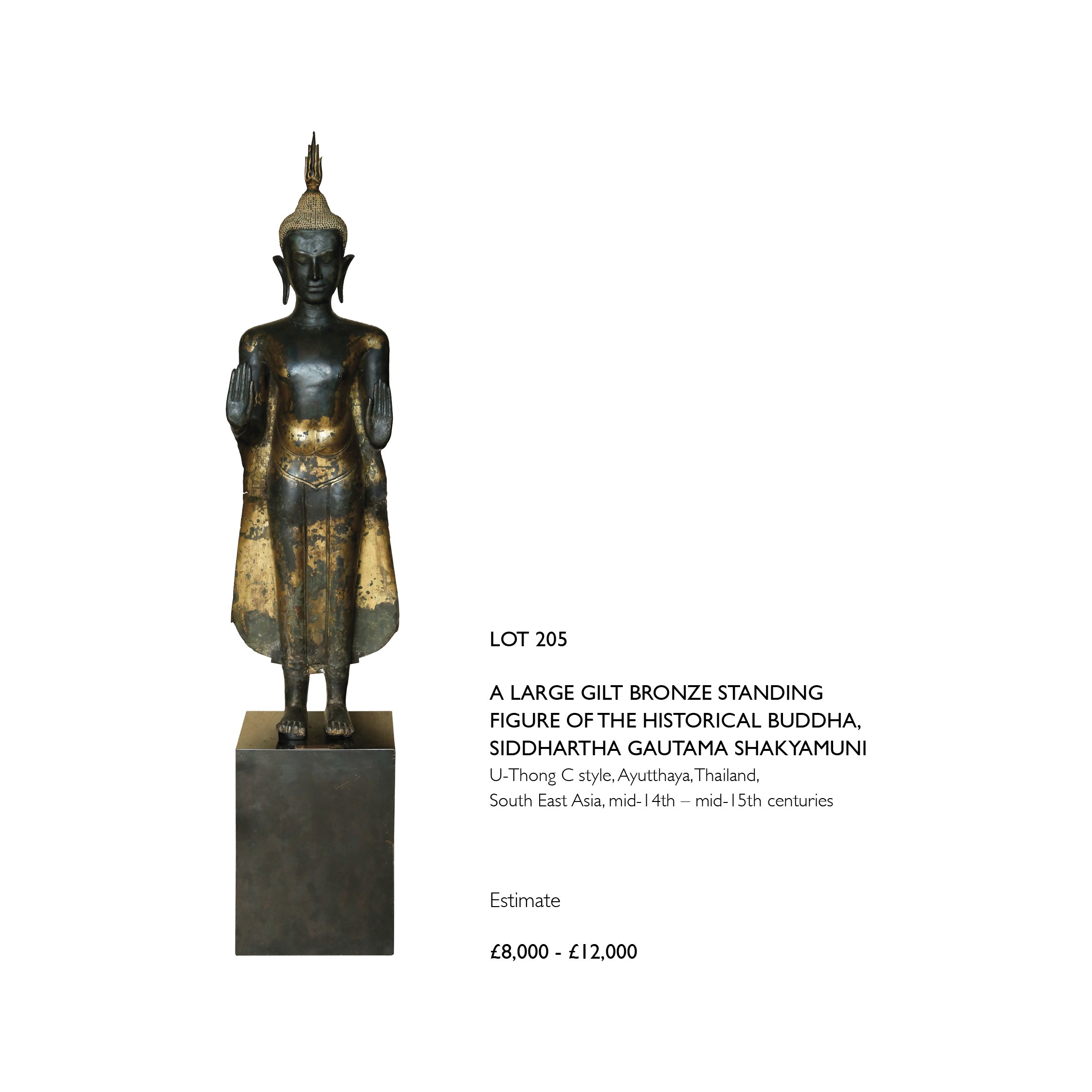 “I have always believed, and I still believe, that whatever good or bad fortune may come our way we can always give it meaning and transform it into something of value.”