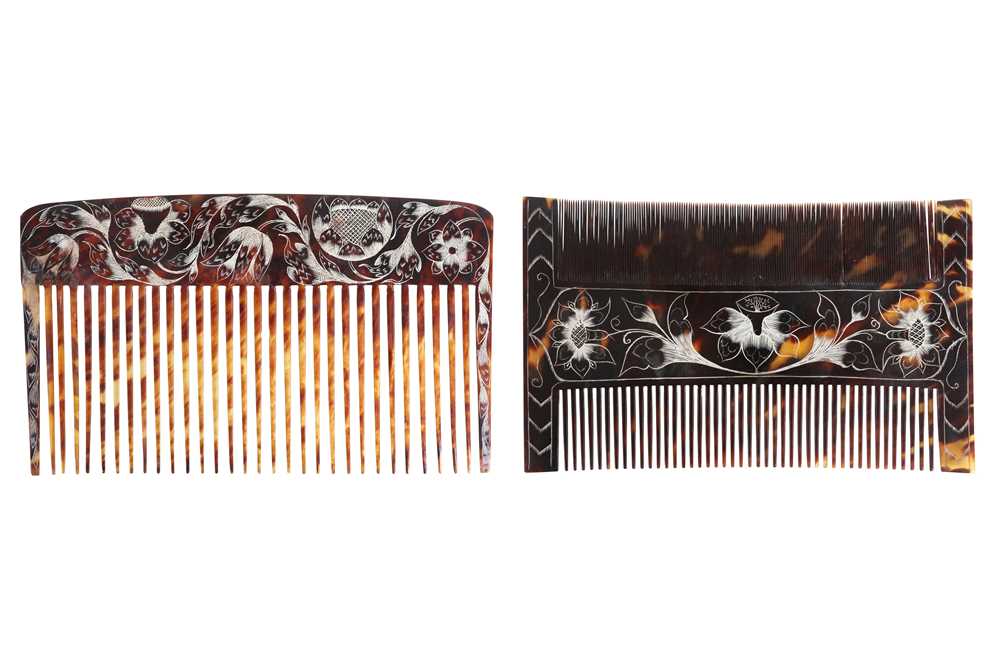 TW0 RARE AND IMPORTANT LATE 17TH CENTURY JAMAICAN COLONIAL ENGRAVED TORTOISESHELL WIG COMBS, ATTRIBUTED TO PAUL BENNETT (FL. 1673-92) OF PORT ROYAL, JAMAICA, comprising a wig comb and another for lice, the single sided coarse comb, with long, well spaced teeth, carved with a central shield with a coat of arms featuring a lion walking beneath a tree, with a helmet over, flanked by scrolling sunflowers and other flower heads, the double sided fine comb with one side more closely spaced than the other, both combs engraved on both sides with various indigenous flower heads and scrolling foliate motifs, some restorations,

These two tortoiseshell combs were almost certainly produced as part of a set together with a tortoiseshell comb case which would also have been finely engraved and possibly even dated and inscribed ‘Jamaica’. A very closely related pair of combs together with their comb case, inscribed ‘JAMAICA 1685’ and attributed to Paul Bennett are now in the permanent collection of the Metropolitan Museum of Art, New York, having been acquired from a sale at Bonhams in 2017. (Bonhams, London 25 October 2017, lot 39, sold for £46,250, now Museum no. 2018.7.1–.3). A further closely comparable pair of combs and case, attributed to Bennett and inscribed ‘Jamaica 1673’ are in the Victoria and Albert Museum, London, (Museum No. 524 to B-1877). Further examples together with their cases sold at auction include lot 82, Sotheby's New York, Important English Furniture, 16th October 2009, realised $20,000 and lot 9, Bonhams, London, 21 November 2012, sold for £23,750 inc. premium. Other known examples which can be attributed to Bennett include the Sir Cuthbert Grundy comb case, dated 1672, a round powder box lid and comb case in a private U.S collection dated 1677 and the 'Lady Smith' casket, which is considered to be the craftsman's masterpiece. The coat of arms engraved on the present comb, depicting a lion beneath what appears to be a palm tree; is a particularly unusual feature as coats of arms were usually only engraved on to the comb cases rather than the combs themselves.

These rare late 17th century survivors are important historical reminders of the past. Reflecting both European and Jamaican culture, they are cultural hybrids that combine recognisable colonial materials and depictions of indigenous flora with English stylistic and social elements. Records show that these combs were sent back to England from Jamaica, a Lady Lynch sent one set of the combs and case to Lady Arlington in 1682, along with '400 lbs of the best white sugar from Barbados ... and some vanillas'. Sir Henry Morgan, Lieutenant Governor of Jamaica between 1674 and 1682, sent a present to Sir William Coventry in 1676 of 'two large turtle-shell combs in a case of the same' describing them as of 'no value' but possibly of interest. These combs are now in the collection of The Institute of Jamaica, which holds eleven other examples attributed to Paul Bennett. The first was purchased in London by members of the West India Committee in 1923 when it was described by H.M.Cundall in The West India Committee Circular, (1923) as 'probably one of the earliest art objects in the British West Indies displaying European influence'.

These are therefore problematic yet important historical objects that represent our difficult Colonial past, described by contemporaries at the time such Sir Morgan as having ‘no value’, a comb being a simple every day, useful object, these combs are now seen as incredibly important survivors that embody the English exploitation of Jamaica’s natural history and people; and are the earliest known surviving works of art reflecting European culture from Jamaica. It is relatively recently that these exquisite combs and their cases have been attributed to Paul Bennett and to his follower Matthew Comberford (Fl. 1688-1692). Philip Hart in his article Tortoiseshell Comb Cases, for the Jamaica Journal, (Vol. 16, November 1983) found only one recorded comb maker working during this period, named Paul Bennett, and he is therefore usually attributed as the maker of these mysterious combs. The article states that in 1983, only twenty of these combs were known to have survived, and nearly all were discovered in Great Britain. These combs were all made between 1673 and 1692, when an earthquake hit Port Royal and most of the city was swept under the sea.