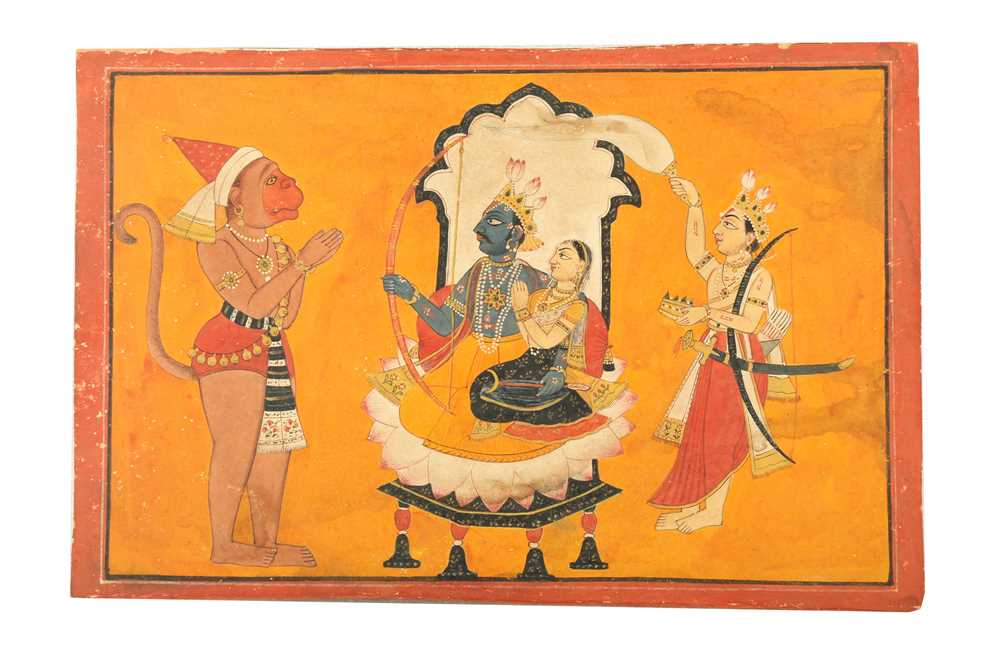 Opaque pigments heightened with gold on paper, the horizontal composition a replica of a known painting of the Hindu God Rama enthroned with Sita next to him, depicting the God and his consort, both seated on a polygonal throne with cusped backrest, the feet of the throne in the typical design of charpai (or mir-i farsh) feet, the couple wearing several strands of pearls and encrusted golden jewellery, Rama with his iconic bow and the typical Basohli crown with lotus buds, his brother Lakshmana standing to the right and wearing a similar crown, whilst agitating a fly-whisk over the head of the beloved couple, to the left the Hindu god Hanuman, holding his hands in prayer, demonstrating his devotion to Rama and his wife, the scene set against the vibrant and traditional Punjab Hills ochre-yellow background, and within black and white rules and bright red borders, the recto plain, 18.4cm x 27.5cm.

Our lot seems to be a later copy of a Basohli composition dated 1690 - 1700, once part of the Alice Boner collection and currently part of the Rietberg Museum's collection. For further reference, please see R. Skelton, Indian Miniatures from the XVth to XIXth Centuries, 1961, pl. 32.

The vibrant and dramatic effect of this painting is achieved through the use of limited compositional elements which are magnified to a larger size suited to fill the picture. Another typical element featuring in the creations of Basohli, Chamba and Nurpur schools is the use of a pulsating, vivid background with ochre yellow as primary colour, framed within bright red borders; a chromatic duo which not only exalted the figures but also provided the perfect backdrop for the artist to depict further coloured and patterned textiles as ornaments for his subjects (C. Glynn in Ragamala: Paintings from India, 2011, p. 47).