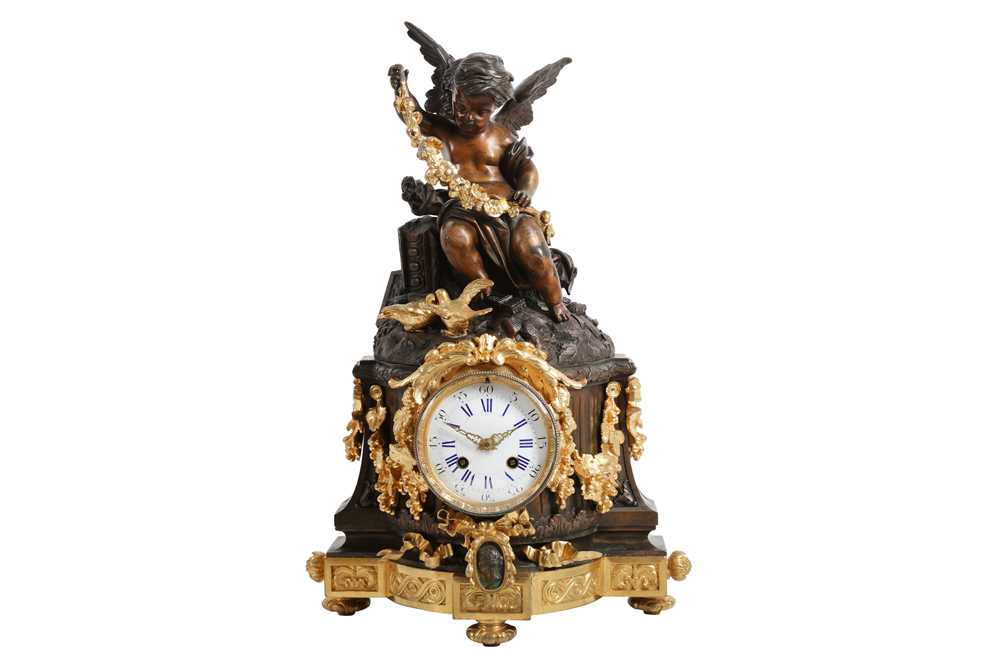 A 19TH CENTURY FRENCH NAPOLEON III BRONZE MANTEL CLOCK BY HENRI PICARD AND RAINGO FRERES, depicting Cupid holding a floral garland and seated on fragments of a ruined building, with ormolu doves at his feet, the clock case modelled as a fluted column on an ornate plinth base, with parcel gilt decoration of vines and grape garlands, the reverse of the case signed 'H. PICARD 58', the white enamelled dial with Roman numerals, the twin train movement with outside countwheel striking on a bell, the backplate signed 'Raingo Freres Paris' and also numbered 58,

The movement is ticking and striking but not fully tested or guaranteed.

The Parisian fondeur and doreur Henri Picard was recorded at 6 rue Jarente in 1831, and moved to 10 rue de la Perle in 1839. The firm was renowned for the production of decorative items of the highest quality, a reputation confirmed by their commission to supply furniture and works of art for Emperor Napoleon III's apartments at the Louvre in the 1860's. Raingo Freres were widely considered to be one of the finest horologist firms during that period and so the combination of these two greats in one clock is a rare find. For another example of a clock by Picard and Raingo Freres see Bonhams, Los Angeles, 10 July 2013 lot 4126.