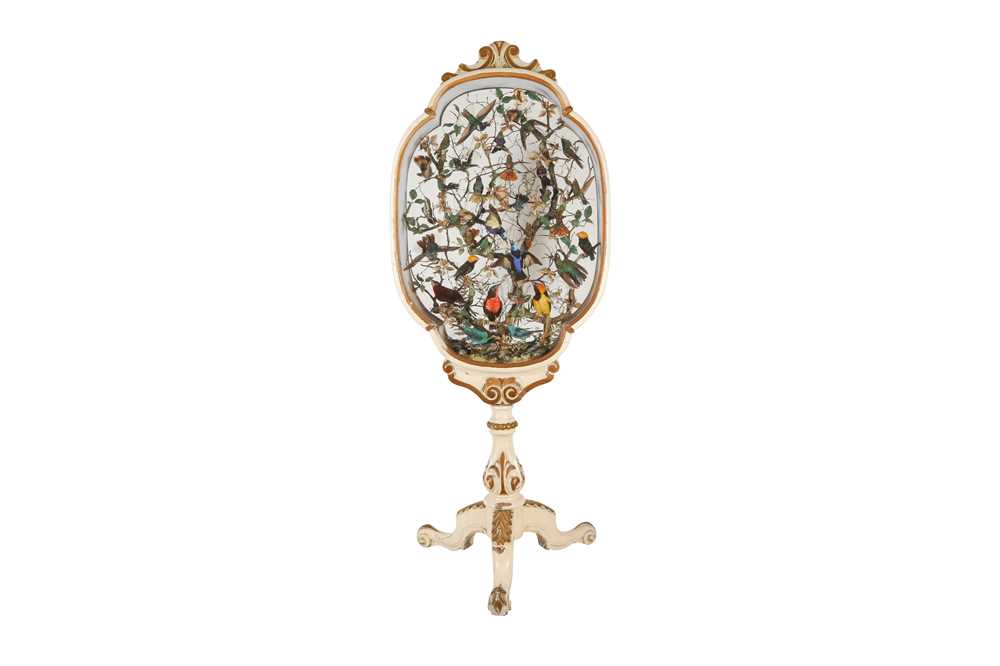 the glazed firescreen of scrolling form, and with volute scroll crest, the main glazed section rotating on a foliate baluster stem over a triform base, later painted white and gold, containing South American birds and butterflies by Henry Ward of London, twenty nine South American birds in two sided (front and back) glazed oval case, the birds mounted on handmade branches set amongst dried vegetation and moss, embellished with handmade leaves, to the backs of the branches are small labels with numbers, which would have been to identify the birds, two taxidermist trade labels to interior, both reading ‘H. Ward, Late Williams, 2. Vere St, Oxford St, London’ (one slightly larger, visible from front, one slightly larger, visible from rear.)
The bird species are as follows -
Various species of hummingbird, to include - Mangos Hummingbird (Anthracothorax spp.) White-necked Jacobin Hummingbird (Florisuga mellivora) Ruby-topaz Hummingbird (Chrysolampis mosquitus) The other species include - Golden-headed Manakin (Ceratopipra erythrocephala) Red-legged Honeycreeper (Cyanerpes cyaneus) - a pair of male specimens, artistically arranged (like a vignette within the case) squabbling over the remains of a butterfly.
Blue Dacnis, aka Turquoise Honeycreeper (Dacnis cayana) Golden-headed Manakin (Ceratopipra erythrocephala) Tanager (Ramphocelus spp.) Red-breasted Meadowlark (Leistes militaris) Oriole (Icterus spp.) Green Honeycreeper (Chlorophanes spiza) Three butterflies accent the case, one in the beak of the honeycreeper. One to top (Yellow Pansy Butterfly (Junonia hierta) - this species is actually from Africa and South East Asia. Ward not strictly abiding to the insect life of South America!) and another at bottom (Crinkled Banner Butterfly (Bolboneura sylphis).

Henry Ward (1812-78), father of prolific taxidermist Rowland Ward, and skilled taxidermist in his own right. In his early career he was employed by John Audubon (American naturalist and bird painter). Listed in trade directories as a taxidermist at his London address (2, Vere Street) from 1857 until his death in 1878. The 'late Williams' refers to Ward having worked for T.M.Williams of Oxford Street (Thomas Mutlow Williams was one of the dozen British taxidermists to appear at the 1851 Great Exhibition). A truly impressive piece and a rare opportunity to acquire a superb piece of historical taxidermy, by one of the masters.

Subject to CITES. International buyers are responsible for any required export permits. No permit is required for UK buyers as this item pre-dates 1947.