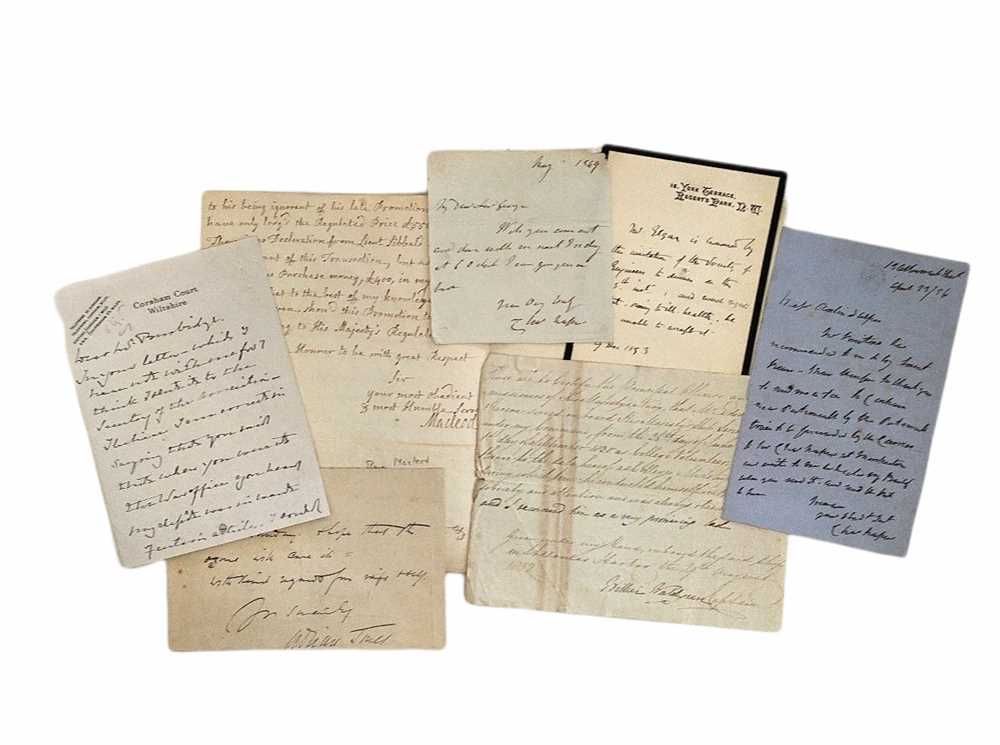 Admiral Sir Charles Napier (four letters, one written whilst in Malta commanding HMS Powerful and asking for a container to be forwarded, one page, 25 March 1841; a later letter requests goods to be sent by train to Portsmouth and carrier to Cookham, one page, 23 April 1856); Admiral George Egerton (two letters to home, one reading "A telegram from Zanzibar arrived two days ago to say that Zanzibar troops have been attacked near Kilifi- two kileld, eight wounded and that teh ships now at Zanzibar & in the neighbourhood were going there, the senior officer Captain MacGill being sick in hospital, this I sent on in cipher to the Admiral and yesterday I got a telegram from him to be ready for sea Friday at noon i.e. tomorrow and we shall be off but whether we shall go to Mozambique or direct to Zanzibar I don't know", five pages, 8-11th July 1895); Admiral Henry Eden (signed certificate for a midshipman who behaved "with diligence, attention and sobriety", 1833); Captain Samuel Bircham; Adrian Jones; George Wade (document requesting supplies to HMY Royal Caroline, countersigned by Thomas Lascelles, one page, 1742); Francis Elgar; Captain William Waldergrave (signed certificate of service for a College Volunteer, recommending him "as a promising lad", one page, 29 August 1832); Colonel J.W. Gordon; Ignace Gyulay (clipped signature of the Austrian General who fought the French throughout the Napoleonic wars); Colonel John Jeffrey (letetr to Charles Stuart, regarding a long dispute on duties on cod fish imported into Portugal from England, four pages, 5 Febraury 1812); Colonel Everard Primrose; General Lord Methuen (two letetrs, one to Mr Burbidge, Managing Director of Harrods, reading "your man came down to me with your list of prices and I took it for granted that you had in an informed manner to deal with me. I wrote with the best intentions meaning to show how far better it is to help Lord Kitchenre rather than to make his work the more difficult. I am extremely sorry I have placed you in a false position", three pages, 1914); Admiral Charles Beresford ("I am not sure whether I shall be able to get on to-day on the Irish Question, but I shall come on Tuesday on the Alien Question", one page, 27 June 1918); John St. Aubin (signed cheque); Sir Blair Aubyn Stewart-Wilson; also including cards and slips signed by various Admirals (Sir William Robert Kennedy, Sir William Garnham Luard, Sir Lewis Antony Beaumont, Lord Charles De La Poer Beresford, Sir Michael Culme Seymour and Sir John Ommanney Hopkins) and two slips stamped "British War Cabinet, Villa Majestic, Paris" signed by Sir John Greig Latham and Colonel R.H. Beadon; v.s. 18th century- 1981. (35)