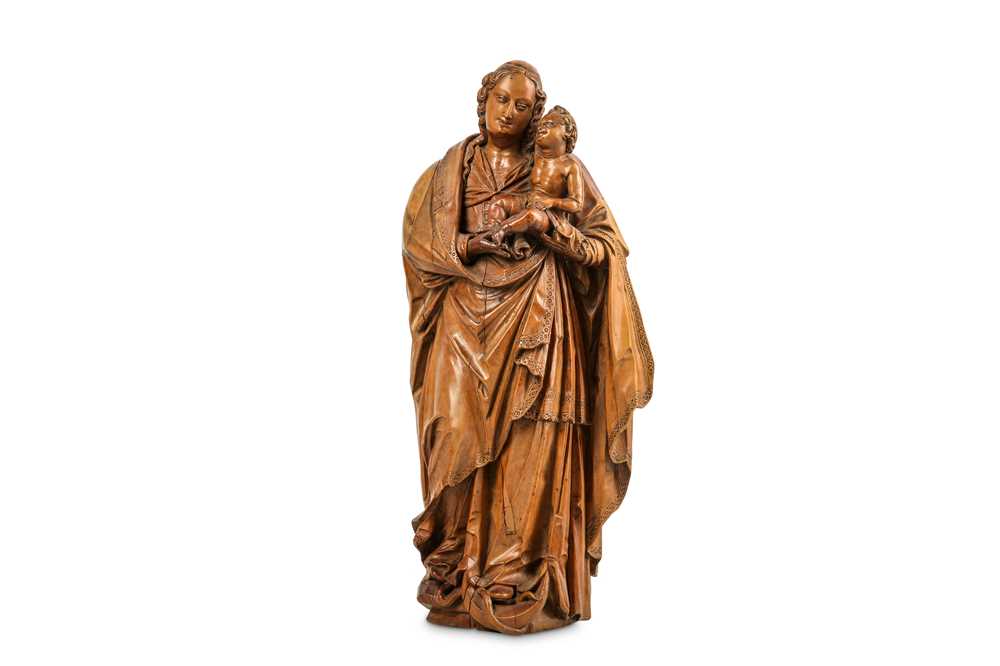 Click for high resolution
A FINE LATE 16TH CENTURY SOUTH GERMAN (POSSIBLY AUGSBURG) CARVED BOXWOOD GROUP OF THE MADONNA AND CHILD the standing figure of the Virgin depicted with long curly flowing hair, a small filled hole to the top of her head indicating she once wore a crown, wearing a mantel laced at the front and a cloak with guilloche pattern border, the drapery swept across her body and revealing her toes below, holding the playful figure of Christ who has his right arm around her neck, a serpent and crescent moon at her feet, carved in the full round, 35cm high  This exceptionally finely carved figure depicts the Virgin raised on a crescent moon and trampling the devil in the form of a serpent. This pose may refer to a passage from the Bible: ‘In heaven, a great portent appeared; a woman that wore the sun for her mantle, with the moon under her feet, and a crown of twelve stars about her head’(Apocalypse 12: 1-2). The crescent moon is also the symbol of her immaculate conception in Revelations. The distinctive facial expressions of the Virgin and of the Christ Child indicate that she was carved by a South German sculptor before the 17th century when facial features tended to me more idealised and classical in their proportions with more static expressions. The style and folds of drapery are indicative of a late 16th century date, the intense Gothic folds which appear to have a life of their own that feature in the works of the early 16th century such as those by Veit Stoss have relaxed into elegant creases, and show none of the exuberance of the early Baroque which follows in the 17th century. The top of her head is carved with a slightly recessed ovoid and there is a small filled hole to the top, indicating that she would have worn a precious metal crown, as was usual in the sculpture from this period. The Metropolitan Museum of Art, New York has an ivory Virgin and Child which is of similar style and pose to the present carving, (Inv. No. 24.80.89a,b) catalogued as late 16th century, German or Netherlandish, her sturdy proportions and comparatively static pose with drapery swept in folds up to the left hand which supports Christ can also be seen in this figure, and both are raised on a crescent moon. The wide faces of both Virgins feature heavily lidded eyes, long pronounced noses above small open mouths and slight double chins, flanked by the hair carved as individual curling tendrils around the face.