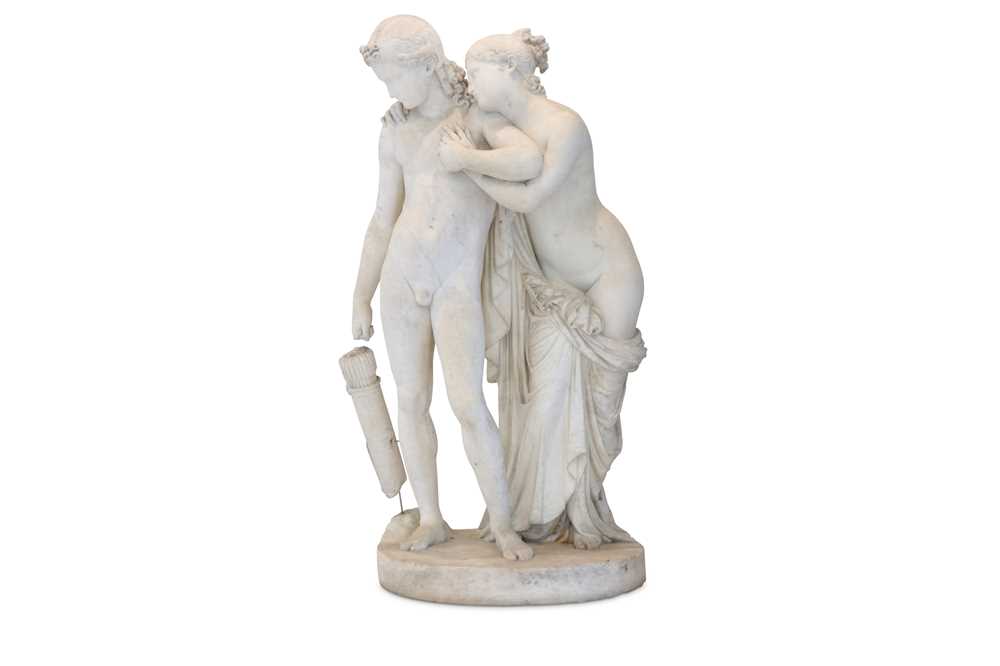 Click for high resolution
AN IMPORTANT EARLY 19TH CENTURY NEO-CLASSICAL MARBLE GROUP OF VENUS AND ADONIS, CIRCA 1820 Adonis nude and turning away to dexter, Venus nude except for her falling drapery, tied in a complex fold at her thighs to reveal her bottom, she clings to Adonis as he tries to remove her left hand, raised on an oval base, apparently unsigned, 139cm high x 70cm wide x 60cm deep  Provenance: The marble has been in the same London private collection for at least a generation.  The present large marble group depicts Venus beseeching Adonis to stay with her and not to go hunting; he stands with his quiver of arrows ready to depart as she implores him to stay, her arm wrapped around his right shoulder and her face leaning against his left as he turns away to leave. According to Ovid's Metamorphoses, Venus had fallen madly in love with Adonis after being hit by an arrow from Cupid's bow. Sadly her worst fears were realised and she was never to see Adonis again as he was killed by a wild boar. The present marble owes much to Antonio Canova's famous sculpture of the same subject, but the sculptor of the present work has cleverly altered the composition to show Adonis turning away from Venus rather than looking into her eyes, imbuing the work with a great emotional depth and pathos whilst also hinting to the viewer of the tragedy to come. That the sculptor has invented his own, until now unrecorded version of the subject indicates that he was an accomplished artist, familiar with the seminal works of this theme but confident enough to re-work them to his own design. It was considered almost obligatory for British sculptors in the early 19th century to travel to Rome to study ancient sculpture and the Neo-Classical masters such Canova and Bertel Thorvaldsen as part of their ongoing education. John Gibson (1790-1866) for example, now regarded as the foremost British Neo-Classical sculptor, spent many years in Rome and studied there under Canova. In fact according to contemporary travel literature, both Canova's and Bertel Thorvaldsen's studios were considered important places to visit not only for sculptors but for all well-educated gentlemen on the Grand Tour and so it seems likely that the sculptor of the present work visited their studios and studied their work. This is important, because we know that by 1820; following the death of the original owner, Canova's Venus and Adonis was back in his studio where he re-worked the drapery to reveal more of Venus's nude behind and added a fig leaf to Adonis (amongst other alterations, the marble is now at the Musée d'Art et d'Histoire, Geneva). The present sculpture also shows the influence of Bertel Thorvaldsen's marble group of Cupid and Psyche, which like Canova's group depicts the male nude looking at the female as she wraps her right arm around him, in contrast to our Adonis who turns away from Venus's feminine wiles. Attributing the present marble to a particular sculptor is difficult, however according to the online reference, the Biographical Dictionary of Sculptors in Britain (1660-1851) (the database originally published as a book in 2009 as A Biographical Dictionary of Sculptors in Britain 1660-1851, Yale University Press), there are four main contenders for the sculptor. Robert Ward of Liverpool is listed as having produced a Venus and Adonis  in 1828, (now lost) as did Isaac Jackson, also of Liverpool in 1829.  William Spence is recorded as exhibiting a group of Venus and Adonis at the Royal Academy, London in 1821, and Richard Cockle Lucas exhibited his Venus and Adonis there in 1831. Further study of these possible candidates may well result in a firm attribution in the future.