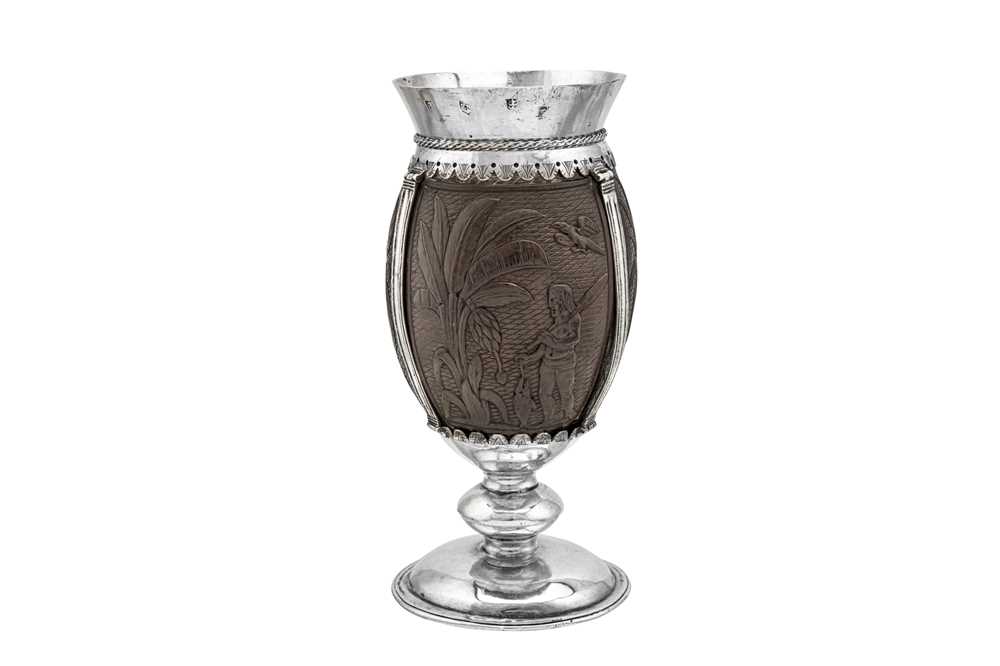 The ovoid coconut body upon a domed circular foot with a compressed knop stem. The coconut section between hatch engraved scalloped mounts held by three pinned strap sections with reeded edges. The upper mount with a tapering rim with applied corded junction. The coconut section carved with two Polynesian men holding clubs, one grappling with a snake, the other holding a fish caught on a line each next to coconut trees. The front section carved with a coat of arms surmounted by a helm and foliate mantling and a crest of a leg in armour couped at the thigh, spurred. Marked to the upper mount only with makers mark between two town marks.

The arms and crest are possibly for Alman of Pevensey, and Warbleton, Sussex, with a cadency mark for a second son.

Edward Mangie or Mangy (1634 – 1685) was probably the son of Henry Mangie, a locksmith of York, whose uncle was a goldsmith. When he was twenty-five, he bought his Freedom of Hull and moved to the Church Lane premises, marrying Katherine Spalding of York in 1661. Of their surviving Elizabeth, born in 1669, an Edward, born in 1673, and Katherine, born in 1677, all survived.

The Mangie’s ran a successful enterprise, producing traditional wares of good quality for church, civic and domestic use, predominantly tankards, tumbler cups and trefid spoons. They also produced ceremonial maces for the Hull and Grimsby Corporations.

When Edward died in 1685, his widow continued to operate the business, using journeymen and apprentices, striking her own 'KM' mark. Their son Edward bough his Freedom and joined the firm in 1695, although there is no record of him using a mark of his own. From 1696 the provincial marking of silver was formally abolished to be replaced with a formal structure of assay offices; Exeter, Chester, York, Norwich and Bristol, the latter being essentially replaced soon after with Newcastle. The Mangie’s continued when upon the death of Katherine in 1725, and Edward's in 1739, the firm was still operating. They would have been expected to send their silver York for assay, however his closed in 1714 (until 1779) so Newcastle would have been the next option.