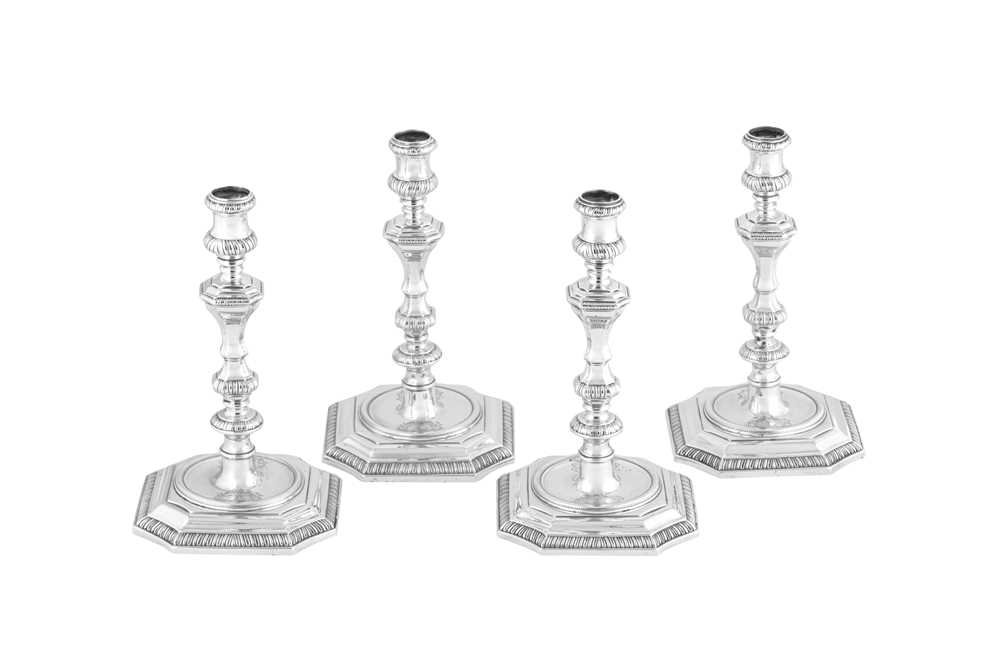 Each with cast square bases with incurved corners with gadrooned edges, the recessed well with a corded edge leading to a central column of gadrooned circular knops below square form knops centred with an inverted octagonal baluster section terminating a gadrooned edge capitals. The wells engraved with a crest of a reindeer trippant collared within a robe of estate, opposing a coat of arms with supporters and the same crest all above the motto J'ai bonne cause and within a robe of estate. Each engraved underneath with numbers and scratch weights as follows; No 1 33=15, No 2 33=11, No 332=16 and No 4 33=17. Each fully marked to the underside, one mark to each side. (4)

The crest is for Thynne

The Thynne family certainly enjoyed regular patronage of the Wakelin firms, as initially founded by George Wickes. Not only did this include commissioning new objects through the successive partnerships but also the refurbishment of old plate, evidently what has befitted these four candlesticks. The heraldry engraved lacks a coronet, whereas the silver commissioned by the Thynne family, such as the basket on stand of 1778 supplied to Thomas Thynne (1734-1796) while 3rd Viscount Weymouth (since 1751) naturally does use the Viscount’s coronet (Christie’s, London, Furniture, Silver and Porcelain from Longleat, 13 June 2002, lot 401). Thomas Thynne was elevated to Marquess of Bath in 1789, and his son would therefore be styled Viscount Weymouth from 1789 until his father's death in 1796. Thus, these candlesticks are surely to have been engraved before 1789, where further research into the Waklein ledgers may record the cost for these added engravings if we presume that it was to the Wakelin partnership that these were sent. The second Marquis certainly commissioned a pair of three-light candelabra and a set of four sauceboats from the Wakelin firm on the 22nd March 1797 not long after assuming the title from the 19th November 1796.

These candlesticks may be recorded in 2 Marquess of Bath, Heirlooms, 1896 Inventory of Plate held at Longleat house, information under formal request.