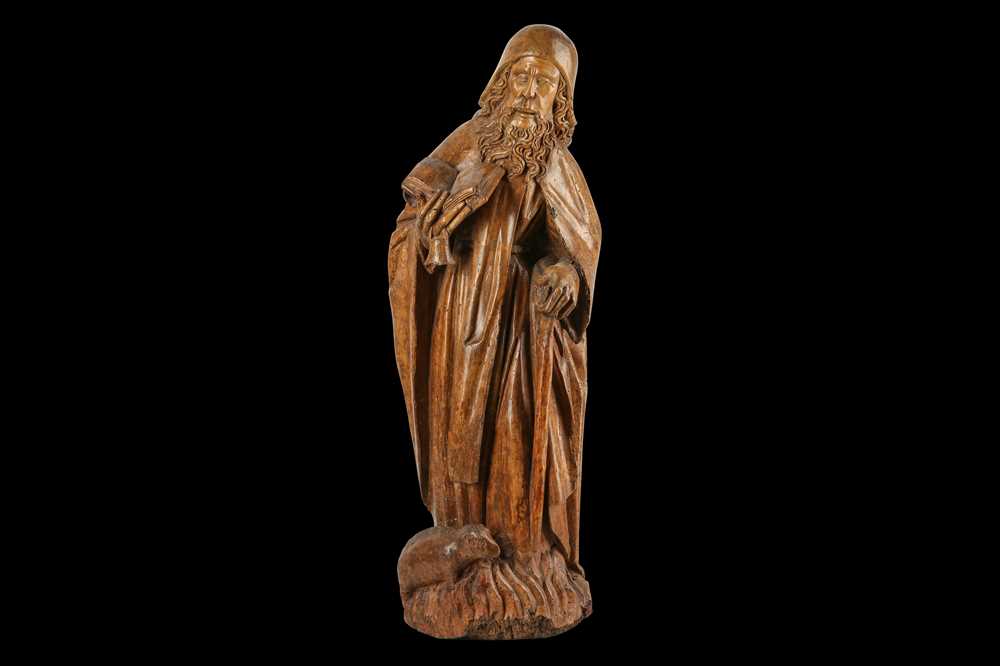 Click for high resolution
A LATE 15TH CENTURY GERMAN CARVED WALNUT FIGURE OF SAINT ANTHONY THE HERMIT the standing figure with a full beard and dressed in a  hermit's robe and cap, holding a staff in his left hand and a book and a bell in his right, on a naturalistically carved integral base with a small pig, carved in the full round, 89cm high Auction Comparable: See Sotheby's, Amsterdam, 21 November 2007, lot 23. Museum Comparable: See Metropolitan Museum of Art, Inv. No. 1988.159. The museum figure also dates from the late 15th century and is carved in walnut and attributed to Nikolaus von Hagenau (German, ca. 1445–died before 1538). It depicts the saint in a similar manner to the present carving with the same attributes and hermit's hair and beard, except there is a demon at his feet. The museum suggest that as the Antonines were dedicated to the care of the sick, largely through the establishment of hospitals, and had two foundations in Alsace—at Isenheim and Strasbourg—it is possible that their figure belonged to one of them. It may be that the present figure was also produced for a hospital in that region. St Anthony the Hermit was also known as St Anthony the Abbot and St Anthony the Great. Born to a wealthy family in Egypt in 251 AD, he gave away his property and wealth to live as a swineherd. Related Literature: Barnet, Peter, and Nancy Y. Wu. 'The Cloisters: Medieval Art and Architecture', New York and New Haven: The Metropolitan Museum of Art, 2005. no. 105, pp. 144, 198.