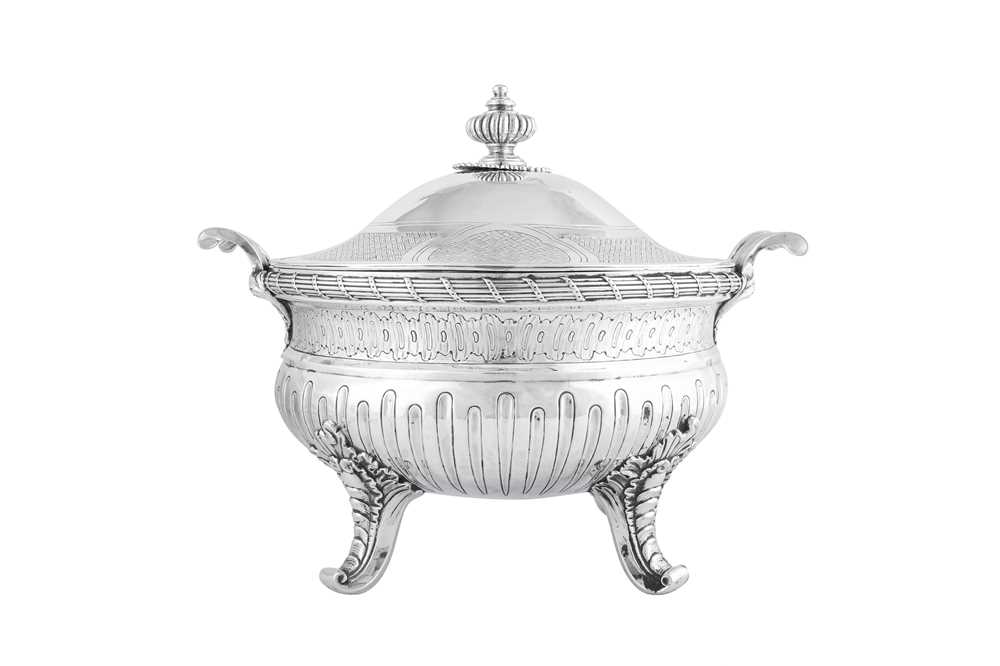 In the French style, of bombe circular form with a reed and ribbon rim leading to two everted cast scroll and husk shell handles all upon four cast rocaille scroll ribbed feet. The pull off domed lid surmounted by a detachable lobed compressed circular knop finial with an integral fluted terrace. The lower section with chased fluting below a flat chased border of rocaille work. The lower section of the lid alternating panels of flat chased trellis work. The lid with a later applied cartouche shaped patch, heightened with an engraved scroll edge. The interior with a pull our Old Sheffield Plate liner, with two small scroll handles, possibly later, marked H.R in a rectangle, possibly Henry Rock (reg. 1799). Fully marked underneath and to lid bezel, the finials unmarked. Also struck to lid bezel with an incuse numeral 2. Housed in a later 19th century oak case.

This tureen, which evidently was once one of a pair, is a particularly early example of London silver faithfully working in the French style. The Coronation service of 1760-63 by Thomas Heming was an adapted version of the French Rococo, drawn upon Thomas Germain’s 'Eléments d’orfèvrerie devisés' published in Paris in 1748. Thomas Heming was the principal supplier of silver to the Jewel House, the department of the Royal Household charged with supplying silver to members of the government and ambassadors. However, Crespell’s were also large suppliers to the Jewel House, this is perfectly illustrated in the preceding lot, with second course dish covers with Heming overstriking Crespell, each engraved with the Royal Arms as standard for ambassadorial plate. Two further soup tureens, marked for Heming from the 1760’s are also engraved with ambassadorial arms, each of which showing some French influences such as the reed and ribbon rim and upturned handles on the 1762 example sold Christie’s 13th Dec 2019, Lot 20 (£10,625 incl. premium) and the handles on a 1767 sold Christie’s 14 Nov 2019, lot 437 (£5625 incl. premium).

The English example to closest follow French designs is the Earl Harcourt soup tureen and stand of 1768 by Thomas Pitts for Parker and Wakelin, sold Sotheby’s 6 July 2010, lot 16 (£457,250 incl. premium). Here it is noted the French style of this tureen is apparently the earliest example of its form in England where the master goldsmith Robert-Joseph Auguste is a strong candidate for originating this design, indeed Lord Harcort owned ice pails by Auguste. The present lot, with its reed and ribbon rim, flat chased lattice work lid, upturned handles, and rocaille chased tall scroll feet may very well also directly copy a French design and is certainly among the earliest of these Francophile designs within London. After an officer of state or ambassador completed his posting, it was officially required that he return the silver to the Jewel House, but in practice this was seldom done, and the silver vessels were usually bought from the jewel house at a rate representing far less than the cost of buying new silver. The applied patch to the lid, presumably over an erasure could once have held an ambassadorial engraved Royal arms.