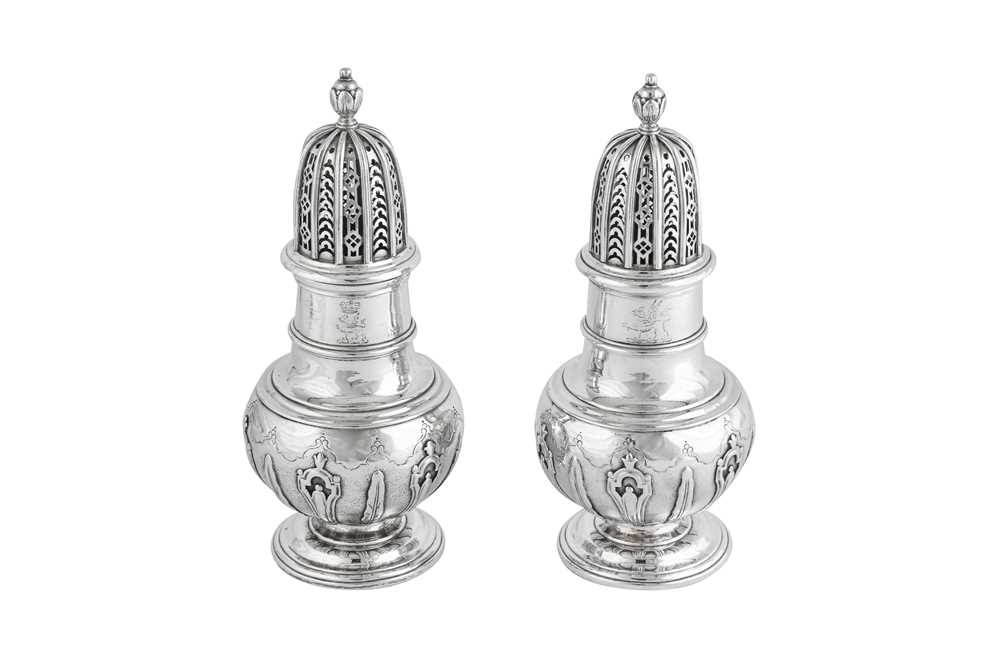 Each of baluster form upon a spreading circular foot, the tall waisted necks with applied central girdle. The pull off domed lids of panelled circular form with twelves ribbed sections dividing alternating panels of saw-cut pierced decoration of lattices or repeating crescents, each surmounted by a cast leaf bound knop finial. The bodies with cast and applied decoration pf Baroque strap work with shaped central recess alternating with elongated leaves, all against a matted ground, with shaped architraves heightened with flat chased scrolls. One side of each engraved with a crest of a griffin passant, the other side engraved with the same crest surmounted by a Viscount’s coronet. Each fully marked underneath, one lid marked with lion passant only to the bezel, the other unmarked. (2)

The crest is for Wentworth

On 18 July 1745 he succeeded his first cousin twice removed, Martha Johnson, 8th Baroness Wentworth (1667-1745), as Baron Wentworth and assumed his seat in the House of Lords. On 5th May 1762 he was created Viscount Wentworth in the Peerage of Great Britain. Between 1770 and his death in 1774 he served as Chairman of Committees in the House of Lords.

The first crest which is contemporary to the date of production would be for Sir Clobery Noel, and the second crest being that of his son Edward Noel after his ascension to Viscount in 1762.

John White was apprenticed to Robert Cooper on the 8th September 1711 and was made free 3rd December 1719 with his first mark registered on 10th December 1719 at Corner of Arundel Street, The Strand. According to Grimwade “White is a mysterious figure, as his work, somewhat rare, is of high quality and Huguenot character, without there being any apparent connection in his training or parentage with the immigré school”

White conducted business from the ‘corner of Arundel Street Strand’ until 1734 when he takes on additional premises at ‘the corner of Green street’. There are associations between the rarely surviving work bearing White’s mark and various Huguenot goldsmiths such as Simon Pantin, Paul de Lamerie, Abraham Buteaux, etc. He was certainly in financial difficulty by the early 1740’s, being discharged from bankruptcy on 3rd March 1740/41 where no silver is found bearing his mark in this decade and thus it is presumed his silver business did not recover. He is probably the John White buried 29th September 1764. It most probable that he acted as an agent or retailer of goods produced by the names mentioned above. (A.J.H. Sale and Vanessa Brett, 'John White: some recent research,' The Silver Society Journal, vol. 8, London, autumn 1996, pp. 465-473.)