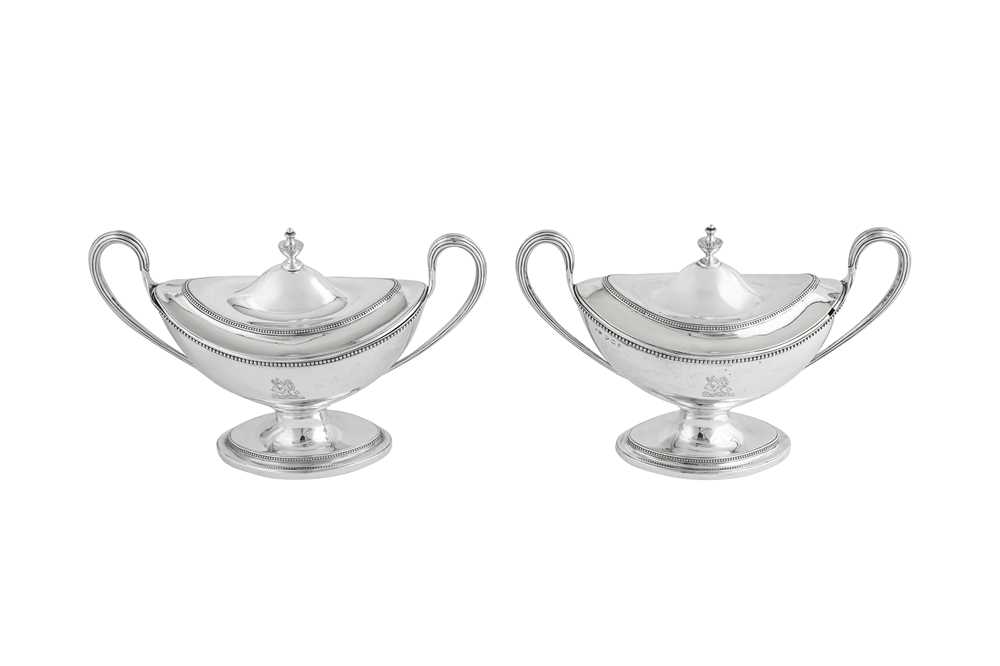 Each of oval navette form upon pedestal oval bases with beaded rims. The reeded loop twin handled leading to pull off cavetto and domed lids of conforming shaped surmounted by beaded urn finials. Each engraved to the side of the body with a contemporaneous crest of a roman fasces fessewise, therefrom issuant a demi-lion rampant, holding in the dexter paw a thistle slipped and leaved. Each fully marked to the side and to the interior of the lid, one body seemingly lacking date letter.

The crest is for Stuart, later Baronets

Possibly for Rev. John Stuart (1740-1811), eldest son of Andrew Stuart Esq (1698-1774) and Mary Dinwiddie (1707-1772) who were married in Hanover, Luzerne, Pennsylvania, America, on the 10th August 1738. John Stuart was a Church of England clergyman, missionary, educator, and Loyalist. He is noted for being the first chaplain of the Legislative Council of Upper Canada, for being the first Anglican priest in what is now Ontario, for building the first church in what is now Kingston, Ontario, and for opening the first grammar school in Upper Canada. His son Sir James Stuart (1780-1853) was created a Baronet in 1841.

Although born in Tyrone Ireland, Andrew Stuart had left for America and thus these tureens were specifically sought out from ireland by his son, alternatively were crested for their kinsman still remaining in Ireland.