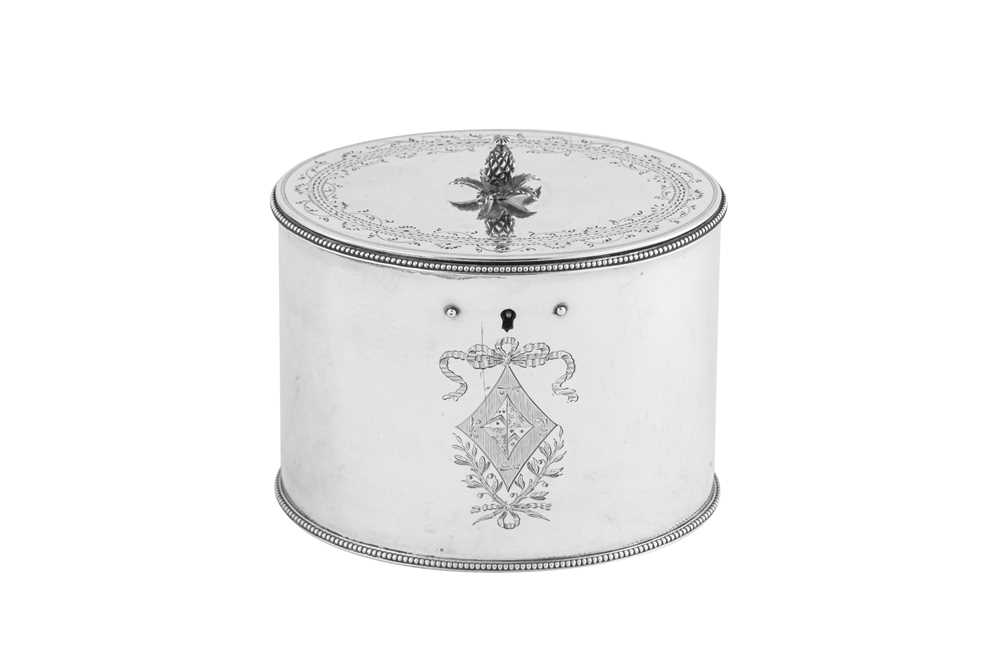 Of oval cylindrical form with beaded rims, the hinged flat lid surmounted by a detachable pineapple with leafy calyx finial. The lid with bright cut engraved decoration of a band of lunettes and trailing scrolls. The font engraved with a coat or arms with a quartered coat of arms upon an escutcheon of pretence all within a widow’s lozenge, ribbon tied surmount and crossed laurel branches beneath. The obverse engraved with a later 19th century impaled coat of arms surmounted by a crest of a reindeer statant, collared, all above the motto J’ay Bonne Cause. The interior with a gilt tin lining with central divider. Lock mechanism with key, functioning. Fully marked underneath, the lid interior with makers mark and lion passant only.

The 19th century arms are for Botfield impaling Leighton

He was the son of Beriah Botfield (1768-1813) and Charlotte Withering (1778-1825), daughter of botanist Dr William Withering (1741-1799), Beriah senior one of three sons of Thomas Botfield (1736-1801) an industrialist with collieries in Flintshire and Shropshire. Beriah senior made his own fortune following his purchase of the mineral rights of the Shropshire Clee Hills in 1780, upon the death of his mother Beriah Junior inherited Norton Hall, Daventry Northamptonshire, and subsequently inherited both of his uncles’ estates of Decker Hall, Shifnal in 1851 and Hopton Court, Ludlow in 1856. Between 1840-63 he was MP and deputy-lieutenant for Ludlow.

The history of the Botfield family was published by Beriah junior as Stemmata Botevilliana in 1843, expanded in 1858 for his connection with the Thynne family, Marquess’s of Bath, their shared ancestor Sir Geoffrey Boteville (1185-1250). Isabella, his wife, was the daughter of Sir Baldwin Leighton, 7th Baronet (1804-1874). Upon Beriah’s death he left his estate to Isabella for her lifetime but with remainder to the Marquess of Bath, to unite the Boteville lines. While some contents were transferred to Longleat, the house contents were auctioned in 1947 and Norton Park demolished in 1952.