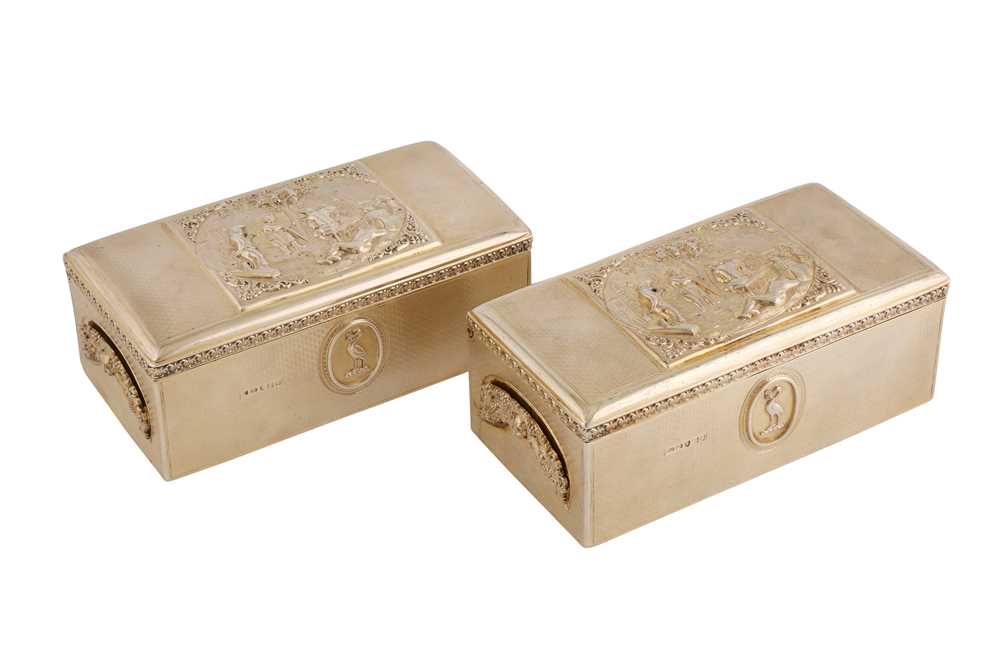 Each of rectangular form, the hinged gentled domed lid centred with a cast and applied ‘Teniers’ panel of a Dutch village scene of figures smoking pipes and taking libations around a tree with houses in the background as well as a reclining drunkard in the foreground, all corned with anthemion scrolls, reserved against an engine turned ground. The edge of the lid with a stylised acanthus leaf border. The bodies with a cast and applied crest to the front of a stork, holding in its beak a cross formée fitched, within a bright cut engraved oval cartouche to the front, the sides with cast and applied handles of fruiting vine centred with a lion’s mask, otherwise all reserved with engine turning. Each fully marked to the front and part-marked to the lid interiors. (2)

The crest is for Cross of Ireland or Fowler

Edward Cornlius Farrell, British 1775 - 1850, (mark registered 1813) was a famed silversmith of the time, he collaborated with Kensington Lewis, a retailer and antiquarian, to supply his ornately and finely embossed and cast wares, often silver-gilt and unusually for the time often in Britannia standard. Popular with high society and royal circles, Farrell’s greatest commissions came from The Duke of York, Prince Fredrick Augustus circa 1824, which was famously later auctioned at Christies in 1827 to pay for the Duke’s substantial debts.