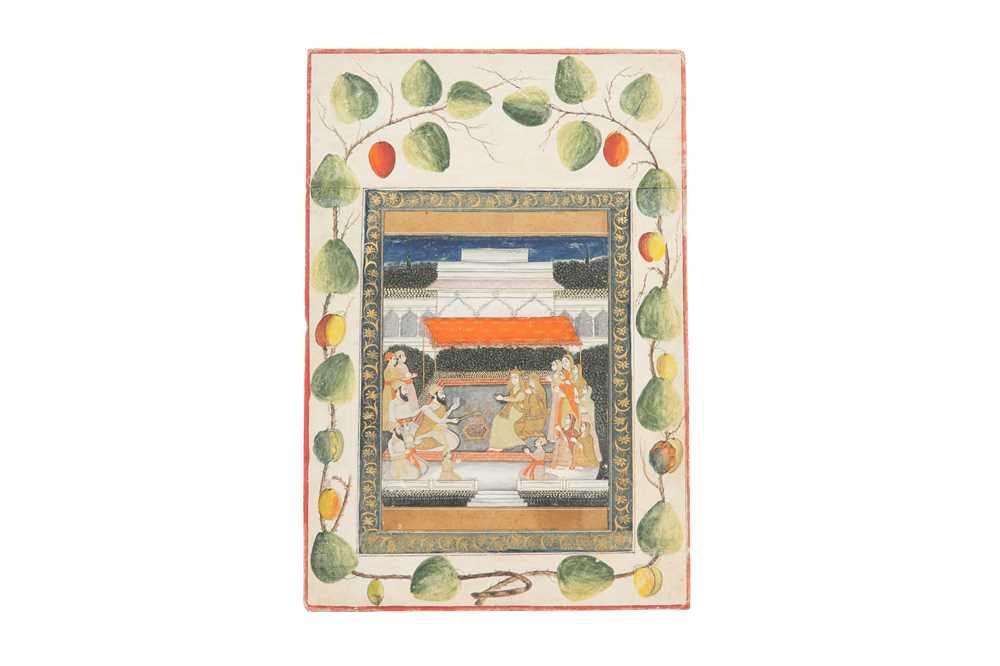 Opaque pigments heightened with gold on paper, the vertical composition depicting a ruler seated in front of a brazier, reciting Hindu prayers from a booklet, performing yajna, a special ritual involving offerings to the fire, opposite him two courtly ladies seated on a golden throne, possibly his wife and daughter, one serene and smiling, the other crouched and seemingly less at ease, the audience divided by gender, the male attendees behind the male ruler, the closest man holding his hand on the ruler's shoulder in a sign of familiarity and confidence, possibly his brother, the female audience from the zenana seated and standing behind the courtly ladies, the composition attached to a later album page border featuring concentric frames of golden floral scrolls on washed blue ground and polychrome-painted Company School-style vegetal branches with ripe mangoes on white ground, the recto with a full-page Company School-style study of a fruit tree, possibly a plum tree, 41.7cm x 28.2cm.

The influence of the Mughal pictorial tradition is very clear in this painting. The attention to detail, level of symmetry, and volume, dominating the scene, are quintessential features of many Mughal productions, both during the Mughal empire and in the years following its fall. Every character is depicted with his / her own peculiar features, suggesting a degree of naturalism and faithful rendering, almost like a photograph of its time.

The headdresses of the two noble ladies in the centre are of particular interest, given their unusual shape. Departing from the typical veils, shawls and turbans often seen in depictions of Indian ladies in the zenana and at court, these headdresses seem to be much more in line with Central Asian female headgears and fashion traditions. Indeed, their design is reminiscent of the shokulo, a traditional bridal headdress originating from Kyrgyzstan and widely in use in other parts of Central Asia, which features a high conical shape and is adorned with furs, feathers, jewels, and small amulets; and the Uzbek tubeteika, a more ornate variant of a female skull-cap. If Central Asian bridal headgears are featured on purpose by the painter, one may suggest that the yajna ceremony depicted in the composition is likely to be a Vedic wedding ceremony performing the traditional Indian Hindu ritual of Vedic yajna around the fire. The roots of this tradition are found in hymn 10.85 of the Rigveda, which is also called the "Rigvedic wedding hymn".