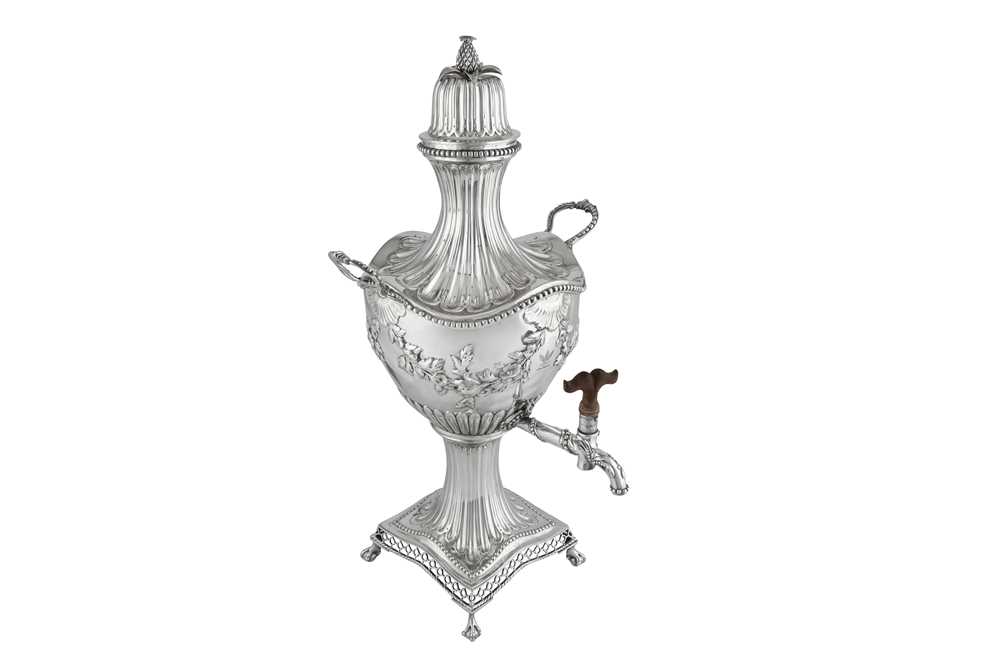 Of urn form with an undulating beaded rim, the bayonet affixed base of incurved square form upon ball and claw feet. The fluted waisted neck leading to a pull off high domed lid surmounted by a detachable cast pineapple finial upon a leafy calyx. The base with a pierced edge of roundels and beaded edges. The cast spout with an asymmetrical beaded scroll junction, leading to spiral beaded sections and leafy forms, a carved wooden scroll form spigot. The body with shell sections adjoined by embossed floral swags, all with beaded shell capped twin scroll handles. The main body with a domed recess for an iron pig. The body, lid and base engraved with a crest of three holly leaves conjoined in one stalk, banded. Fully marked to domed interior and base section, part-marked to lid. Overstruck with Edinburgh marks to the base section and lid only.

The crest is for Irvine, Beilside Aberdeenshire

There are a small number of English made items from the 1770’s and 1780’s that have been overstruck with Edinburgh marks, examples include a pierced mustard pot London 1776 by Thomas Daniel, overstruck by William Davie, also a pierced salt Sheffield 1783 by John Younge & Co overstruck by Alexander Gardner (both, private collection). It seems likely that orders for certain items, likely those that require complicated piercing or castings, needed to be outsourced to specialist workshops that were not available in Edinburgh at the time. In order to conform to Scottish hallmarking practices, or the expectations of their customers, these items were then overstruck by the Edinburgh assay office. Given the small number of examples bearing these overstruck marks it is more likely that examples bought-in by Scottish firms from English workshops were sent unmarked items most of the time.

A tea urn of 1773 incorrectly described as 1762 by Bonham’s marked only with Edinburgh marks for William Davie was sold 14 Oct 2020, lot 215 (£3,187 inc. premium) it shares a pierced base, beaded edges and a pineapple finial. It is much more likely given the presence of this example and the revised date that the 1773 example was also supplied to Davie from Crump’s workshop, expanding upon what we can truly think of as ‘Scottish’ silver or not.

Further to this a coffee pot with an earlier instance of additional Edinburgh marking was sold Woolley and Wallis 26 Jan 2022, lot 759 (£1,100 incl. premium), marked for London 1747 by Thomas Whipham to the right of the handle and to the underside Edinburgh 1747 by Kerr and Dempster, this does not follow the above procedure for over marking. Given the known scarcity of Edinburgh mid-18th century coffee pots, either due to the preferred use of ceramics or the idiosyncratic twin-handled coffee urn, a coffee pot was also a good candidate for an item to be bought in from English suppliers.

A tea urn of 1771 by Charles Wright with the same shape body is in the Minneapolis Institute of Art (77.1a,b)