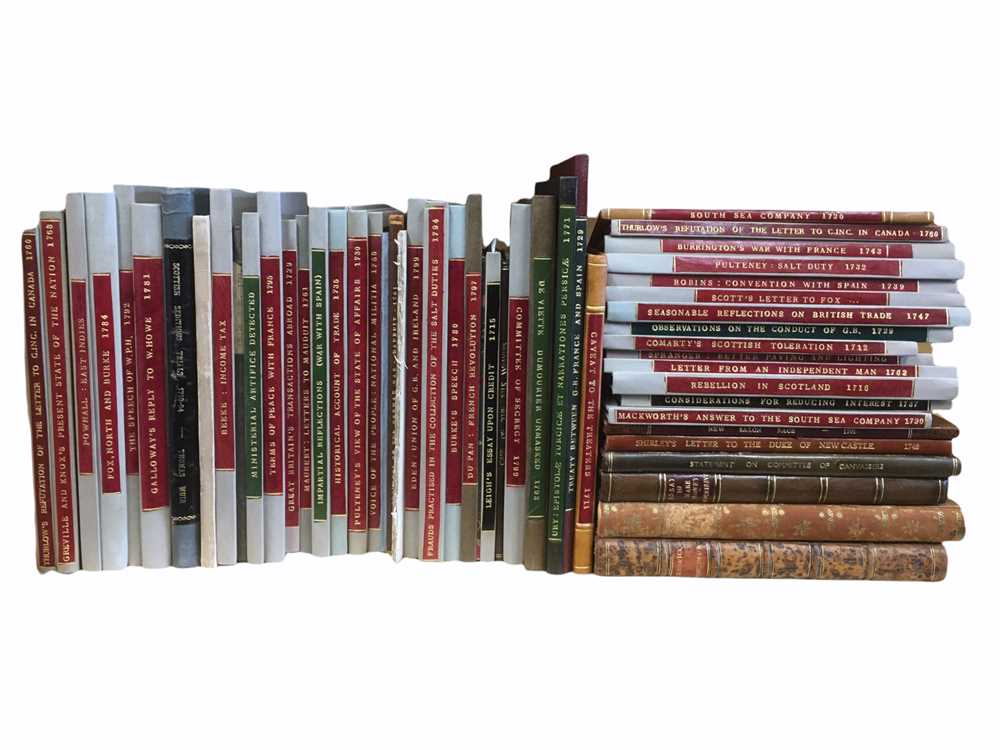 A collection of nearly 60 pamphlets, to include.-

[Toland(John)] Limitations for the Next Foreign Succession or New Saxon Race. Debated in a Conference betwixt Two Gentlemen, London, 1701 § [Swift(Jonathan)]The Management of the Four Last Years Vindicated.... Krass 2935, ascribed by Terrink no.883 as a doubtful Swift item, J.Morphew, 1714 § [Shirley (William) A Letter from William Shirley, ESq Governor of Massachuset's Bay, to his Grace the Duke of Newcastle..., E.Owen, 1748 § [Thurlow (Lord Edward)] A Refutation of the Letter to an Hon(ble) Brigadier-General, second edition, some light damp staining, R.Stevens, 1760 § [Knox (William)] The Present State of the Nation; Third Edition, with half-title, J.Almon, 1768 § A Plan for the Government of Bengal... first edition, J.Almon, 1772 § Pownall (Thomas) The Right, Interest, and Duty of The State, as concerned in The Affairs of the East-Indies, first edition, half-tiles, S.Bladon, 1773 § An Account of the \trial of Thomas Muir, Esq. Younger of Huntershill...for Sedition, Robertson's Edition, Edinburgh, [1793] § [Galloway (Joseph)] A Reply to the Observations of Lieut. Gen. Sir William Howe, second edition, with addition, G.Wilkie, 1781 § The Beauties of Fox, North, and Burke selected from their Speeches, engraved frontispiece, J.Stockdale, 1784 § [Pitt )William)] The Speech...G.G.J. and J. Robinson, 1792 § [Burr, Aaron & others] An Impartial Statement of the Controversy, Respecting the Decision of the Late Committee of Canvassers, browned throughout, Thomas Greenleaf, New York, 1792, together with 44 others similar covering Wars with France and Spain, Rebellion in Scotland, Monetary issues, and the South Sea Company etc., mostly rebound in paper-covered boards with leather lettering labels, some with marbled-paper wrappers, a few in quarter leather over marbled boards. v.s. mostly 8vo., (56)