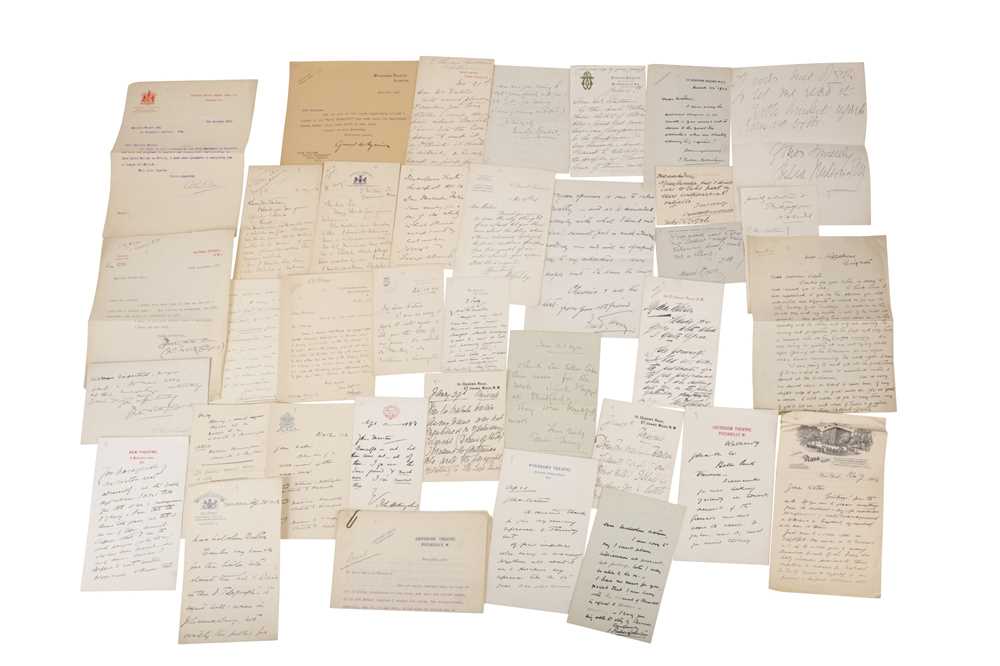 A collection of letters by various late 19th - early20th century stage celebrities, mostly addressed to Daily Telegraph theatre critic and dramatist Malcolm Watson, including: Ellen Terry (thanking Watson for some sweets), Charles H. Hawtrey, Harry Irving (three letters, one thanking Watson "for the paragraph. It said just the right things and in the best charming and friendly way"), Weedon Grossmith ("We are starting rehearsing tomorrow for 'The Duffer' but without one of my leading ladies"), Lewis Waller ("If you want an items of news for Thursday that may be of interest, you might mention that I have recently signed a contract with Mr John Davidson, whose 'For the Crown' will be so well remembered, to do me a version of Victor Hugo's 'Ruy Blas'"), Matilda Wood, Stuart Ogilve ("I am sending you herewith a rough-very rough!- proof of the play, of course for your eyes alone. You'll be sorry to hear mid-way thro' rehearsals I was seized with an acute attack of the old enemy"), Mary Wyndham (discussing a book she wrote and saying "with regard to publishing it, I am not anxious to encounter any adverse criticism"), George Alexander, Paul A. Rubens ("I have just been shown the 'Daily Express' of to-day's date, and am more than annoyed that they should have published anything concerning 'Miss Hook of Holland', as I was solemnly promised that nothing should appear before to-morrow"), Mrs Patrick Campbell, Alfred Lester ("Am putting this new show on...I was going to send you all the particulars of it as I didn't want it mentioned until I opened at the Coliseum")Charles Warner, Arthur Law (discussing the positive reception to a play called "The New Boy"), Charles Wyndham (five autograph letters and one typed ), Gerald Du Maurier (two typed letters, one to Lord Burnham asking "can you give us your usual hospitality of half a column in the 'Daily Telegraph' next week about the Theatrical Garden Party"), William Penley, Freddy Terry (two letters, one mentioning the production of 'The Wooing of Katherine Parr'), Edward Willard, Johnston Forbes-Robertson (three letters, one saying "I am sorry to say I can't place Willimason at present but perhaps later I may be able to do so"), Squire Bancroft, W.H. Risque (saying he is engaged upon another musical extravagance), Lottie Venne, John Martin-Harvey, Arthur Collins (typed note regarding the acquisition of a bronze bust representing the late Lewis Waller as Brutus), Julia Neilson-Terry, W.H. Kendal, John Hollingshead, Madge Kendal and Kate Santley, v.s., c.1890s-1920s (57)