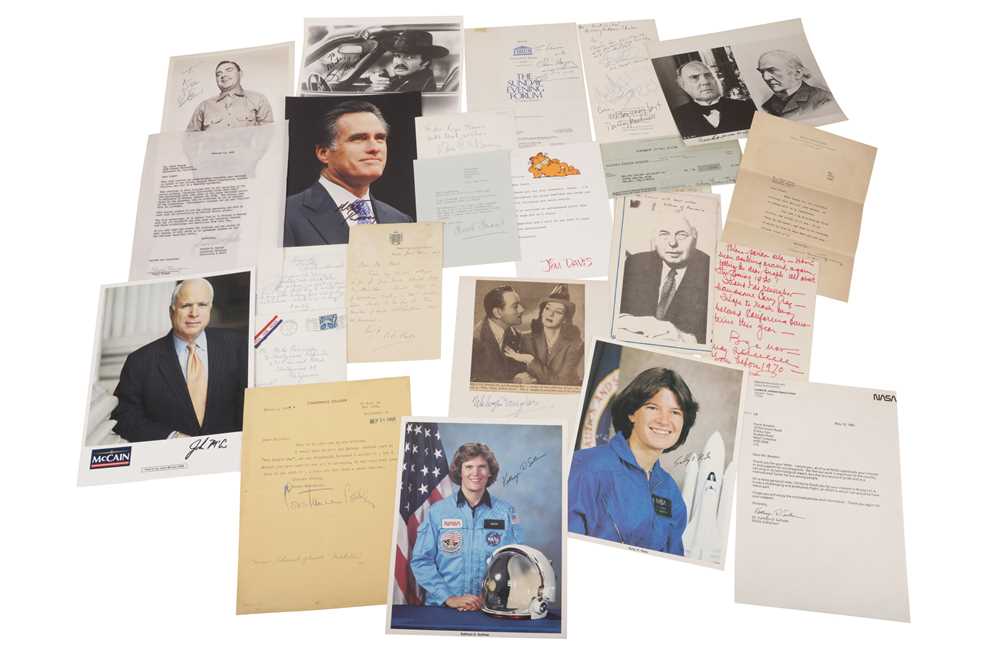 Interesting selection of photographs, cards and letters signed by various prominent figures, comprising: Edward Everett Hale (autograph letter to a Mr Clark, thanking him for his book "which looks very attractive. I shall take if for vacation reading", one page, South Congregational Church, 22 June 1889); official Nasa photographs of Sally K. Ride and Kathryn D. Sullivan, both signed in black ink, the former accompanied by a typed letter thanking the recipient for his interest and support; Rod Steiger (signed cheque); Roger Bannister (signed card dedicated to Lewis and dated 9th March 1982, some unevenness of tone); Edgar Bergen (typed letter countersigned by Bergen and related to the motion picture 'Guardian Maintenance Works Both Way', one page, light creasing, 12 January 1962); Mitt Romney (colour photograph); Jim Davis (typed note on 'Garfield' headed paper, one page, 13 December 1994); Edith Evans (typed letter to a Mr Burnet, saying "I feel that I must explain to you that I am not an intellectual but just an actress and therefore I regret that I cannot help you with your problem", one page, 4 June 1973); John McCain (signed colour photograph signature dedicated to Louis and dated 21 November 1987, newspaper clipping related to the signing affixed to verso); a copy of The Sunday Evening Forum, Thirty-Sixth Season, 1977-1978, signed and inscribed "To Lewis" by Chaim Herzog in black felt tip on front page, clipped newspaper article regarding the Forum by Wolf Blitzer is inserted within the programme; a brochure advertising a concert of Isaac Stern at the Carnagie Hall in January 1997, signed on the last page by Hillary Clinton ("Ari-Best Wishes! Hillary Rhodam Clinton"), Rudy Giuliani ("Ari, all the very best, Rudy Giuliani") and two others; Ralph Richardson (glossy black and white photograph from the film 'No Man's Land', a few smudges to ink) and Van Cliburn (signed card dedicated to Mr Roger Harris); Pat O'Brien (black and white promotional photograph signed and inscribed "To Ken, God bless you, Pat O'Brien"); Burt Reynolds (photograph from Smokey and the Bandit, signed and inscribed "To Mike"); Harold Wilson (signed poster advertising a public conference); Robert Montgomery (typed letter saying "Just now I am directing my first picture, and acting in it too. It is 'Lady in the Lake', and when it is released, it would be nice to hear what you and your friends think of it", one page, browning, 28 May 1946); Melvyn Douglas (signature on cardboard featuring a clipped newspaper photograph on top); Leatrice Joy Gilbert (autograph note on the verso of a publicity brochure); Constance Collier (typed letter to "Gilbert", saying I would love to play the Madame Cheirel part in The Feeble Sex, as you originally intended I should do, but I expect you have cast it and all is arranged", one page, 16 September 1931) and Dorothy Lamour (autograph note signed 'Dotty' and addressed to Mike Connolly, thanking him for his kind note expressing sympathy for the death of Lamour's mother-in-law, two pages, 31 March 1961, with original mailing envelope), v.s. (24)